An Early Look At 'Vessel,' The Colossal Interactive Sculpture Coming To Hudson Yards 154 flights of stairs. 80 landings. 600 tons. INFINITE INSTAGRAMS. Given its slightly secluded location on the far west side of Manhattan, you may not have noticed when "Vessel," a 150-feet tall, $200 million interactive sculpture, topped off at Hudson Yards in December.

Conceived by British designer Thomas Heatherwick, the colossal honeycomb structure is expected to open to the public in March 2019. Let's take a look at how this immersive M.C. Escher fever dream is coming along.

"When I was a student, I fell in love with an old discarded flight of wooden stairs outside a local building site," Heatherwick said in a statement when the project was unveiled. "It caught my imagination and I loved that is was part furniture and part infrastructure. You could climb up stairs, jump on them, dance on them, get tired on them and then plonk yourself down on them. Years later, suddenly here was an opportunity to make a new kind of landmark for Hudson Yards." 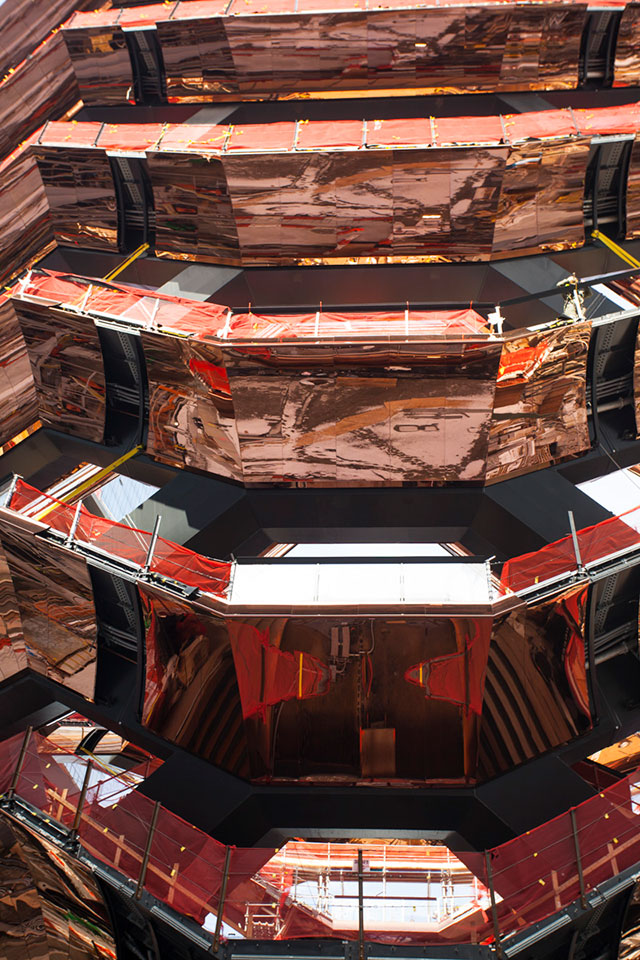 The 28-acre Hudson Yards site, under construction atop two platforms built over the MTA rail yard between 30th and 34 Streets, will ultimately feature 16 new skyscrapers with a mix of office, residential, and retail, plus a flashy new arts center called The Shed and a 750-seat public school.

Vessel is intended as the centerpiece, anchoring 14 acres of public space featuring elaborate gardens with 28,000 plants, as well as some 200 trees. Stephen Ross, the billionaire developer whose company is building Hudson Yards, envisions Vessel as a signature tourist attraction; New York’s Eiffel Tower.

“It’s much larger than you’d expect—much more like a building than a public sculpture," photographer and Gothamist co-founder Jake Dobkin observed. "The shape reminded me of a huge beehive more than anything else, though the colors and molded metal also made me think of Iron Man’s suit. From above it appears different—a whirlpool or cenote surprisingly placed in the middle of Hudson Yards. Whatever it is it feels original, and once it opens seems destined as an iconic destination for the tourists thronging the High Line.”

Vessel, which widens to 150 feet at the top from a narrower base diameter of 50 feet, was fabricated in 75 pieces by a firm in Italy and delivered to Manhattan in six separate shipments, first to Port Newark and then up the Hudson River to the site. The steel frame is covered by a polished copper-colored cladding, and over the coming months it will be fitted with landscaping elements as the surrounding park is brought to life. When it finally opens, visitors will be able to climb each of its nearly 2,500 steps, from top to bottom. Expect EXTREME VESSEL GLUTE HARDENING WORKOUTS™ to become a thing. 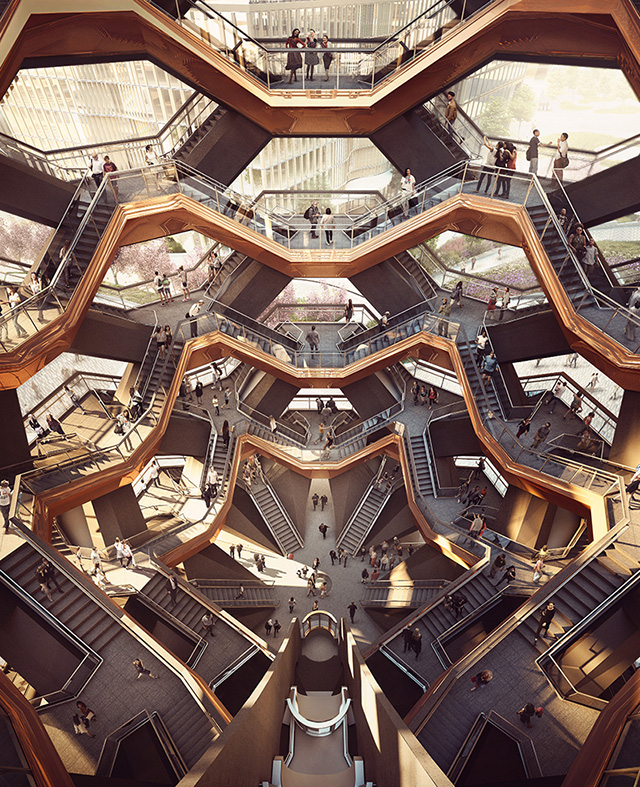 A rendering of the finished interior of Vessel (Forbes Massie, courtesy of Hudson Yards)

We’ll check back in on Vessel’s progress there later this year. For now, you can enjoy this pleasing time lapse video of the sculpture’s assembly. Everything comes together so easily in time lapse.

This was previously published on the Gothamist newsletter on April 10, 2018. Don't miss stories—sign up for our newsletter here.

#hudson yards
#public art
#thomas heatherwick
#vessel
Do you know the scoop? Comment below or Send us a Tip