An Apple Store Grows in Brooklyn 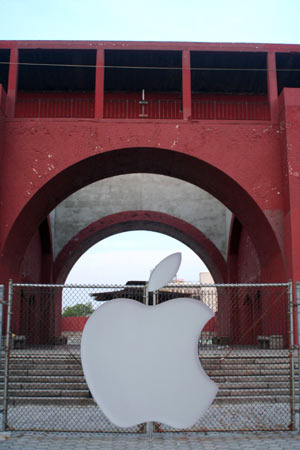 Last week Racked reported that there's word of an Apple store opening in Brooklyn. The question is, which neighborhood will iNvite them in. Dumbo NYC reports that Two Trees has reached out to Apple in the past, but they "weren’t ready". If they're ready now, their options in Dumbo would include the 6600 sq.ft space at 70 Washington Street and the 6700 sq.ft space across the street at Washington and Front Street.

Racked had a few other ideas, narrowing it down to five areas and placing some odds on them. Red Hook: 25-1, Smith Street: 15-1, Dumbo: 10-1, Downtown Brooklyn: 4-1, Williamsburg: "3-1, in our wildest dreams." We agree that there would need to be serious foot traffic in whatever area Apple decides to land, taking Red Hook out of the running. While Dumbo is a great match, the more boring locale of Downtown Brooklyn seems to be the sensible choice.

Perhaps they aren't so sensible though, The NY Times has a story that questions whether the company blew a huge opportunity to increase market share by shunning retail chains in favor of its own stores. Apple began working with Best Buy in spring 2006 "on a pilot project to obtain shelf space for Macs. Given Apple’s long, tempestuous history with many retail chains, restoring trust has been tough. The six-store pilot with Best Buy was expanded to 50 stores by the end of 2006. There are now 200 stores, with plans to expand to 300 this fall. Best Buy, however, has not yet agreed to place the Mac in all 872 stores. If Apple had begun wooing Best Buy two years ago, and perhaps appointed an ambassador to look after the relationships with the chain and other resellers, the Mac would have been much better off."

Half the fun is going to the Apple store anyway, and this never happened when a new Best Buy opened. As for Brooklyn, we can't help but think the new Trader Joe's space on Court and Atlantic would have been perfect for this.

UPDATE: Our sources tell us the Apple Store is going to be on Atlantic near Clinton. Unsubstantiated!