Upon the release of Amy Sohn's new book, Prospect Park West, some Park Slope locals lashed out on the author (who also resides there with her family); but then again it isn't all that difficult to get the Brownstone dwellers riled up. Sohn's fictional tale, at points, holds a mirror up to the neighborhood, drawing upon the real life happenings there; from celebrity couples to sexless marriages to swingers to stroller-pushers. Last week she told us a little bit about it all, and confirmed that blow job prowess is indeed a fairly accurate measure of one's self worth.

You're a fashionable, young writer with a kid who lives in Park Slope who wrote a book about a fashionable, young writer with kid who lives in Park Slope. Isn't fiction supposed to be stuff you make up? Why didn't you set it in Fort Greene just to throw people off? I am flattered you think I am fashionable. You haven't seen me on a bad hair day (which always results from brushing it). Park Slope has a unique combination of leftist values, affluence, and insane people. You put vegans, breeders, ballers, gays, lesbians, and dog-lovers all in one area and it makes for a lot of comedy. I mean, we have these characters here - Crazy Opera Man, Crazy Sign-Ripping Man, Intense Garbage-picking Homeless Dude, Boomer Lady Who Yells at Stroller People. But even with all of them to draw on, most of the book is made up. I drew on real places and events (wallet stealing at the Coop, swinging on ParkSlopeParents, a bike accident) but only insofar as they advanced the dramatic storylines of my made-up characters.

Louise Crawford (Park Slope's Only The Blog Knows Brooklyn) said your book is perfect for a person who thinks "prowess giving blow jobs is a true measure of your worth as a person." Do you think prowess giving blow jobs is a fair measure of personal worth? Does your book appeal to any other hidden demographics? I do think blow job prowess is a fair way to measure self-worth. Many times I have been despondent over various aspects of my life and in those moments I have tried to focus on the good things about me. My beege prowess is one of them. I've gotten a lot of good head tips over my eleven years writing about sex. I would give the same advice to Park Slope mothers that I once received in a letter from an ardent reader of my “Female Trouble” column: “More swallowin’, less wallowin’.”

Louise's gripe with me seems to be that I am obsessed with being a cool mom. She is wrong. I'll tell you why. 1) In my articles about motherhood, I have made it clear that I don’t like cliquishness and high-school-type games among mothers. Mothers should try to be real with each other and honest. If this happened, deeper friendships could form, and moms could actually support each other through the many, difficult aspects of early motherhood. I am anti-cool-obsession. 2) If I had to categorize myself, I would say I am an uncool mom - and not only because of my Albert Einstein hair. I don't do well in moms groups. I tried to be the Funny Mom but someone had already been cast. My references were too obscure and I was trying too hard. Desperation in unappealing in dating and friendship.

My book appeals to anyone who has a sense of humor about Park Slope or any bourgeois bohemian breeding ground, who feels their blood pressure rise when they enter the Coop, who gets annoyed by large strollers, who’s ever been in the Teat Lounge, who loves or hates kids, loves or hates breeders, who has witnessed gentrification firsthand, who has contemplated or engaged in infidelity, and who enjoys seventies cinema. 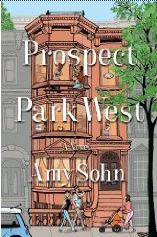 But seriously, you slam the helicopter moms of Park Slope pretty hard in the book. Are you worried about getting shivved at Connecticut Muffin? In 20 years, will you be just another Park Slob? I have gotten recognized but the people that recognize me have all said nice things. I don't think the helicopters consider themselves helicopters. They will tell you about some other mother who is a true helicopter right as they are masticating for their toddler. I'm counting on maternal self-denial to protect me. At the Community Bookstore reading only one person was hostile and even she also told me that overall she enjoyed the book.

There's some pretty hot Park Slope Parent three-way action in the book. To what extent is that based on your own experiences? What's the swingers culture like up by the Park? I am told there is a big resurgence of swinging in the 'burbs again. People who grew up in the various greater NY burbs are now settling there with their kids and swinging because they didn't get to act out in their twenties, and married young. I hear that in Montclair they have ice luges at the parties and parents stand at the bottom catching shots. Apparently there was a swinging scene at P.S. 261 in Boerum Hill. So either everyone’s swinging or everyone’s starting false rumors about swinging.

You grew up in the Heights and lived in Cobble Hill after college. Compare and contrast those neighborhoods for us. Why'd you move to the Slope? I grew up in the Heights and also lived there as an adult. The Heights is an awful place to be a single woman. It's gay bars or drunk bars, the restaurants are mediocre, and you're surrounded by families with kids. I lived there till my late-twenties and then moved to Cobble Hill for the Smith Street bars. I made a lot of friends at Roxy (defunct!), Bar Tabac, the B.I., Boat, Last Exit and even the Brazen Head. But Cobble Hill can get claustrophobic, and the Smith Street restaurant scene has fallen a lot since the late '90s.

So in 2004, after I got married, my husband and I moved to the Slope. Mainly it was because there was more inventory. But we were wanted the P.S. 321 zone, since we were planning to have a child. I was interested in the Fifth Ave. restaurants, the Park, Botanic Garden, museum, and the Coop of course.

I tried not to think about the burb-like aspects of the Slope. I had fond memories of it from my own childhood because in the '80s it was edgier than Brooklyn Heights. A kid in my fifth grade class got kicked out of Packer and accepted by Berkeley Carroll. The Slope kids were smart, edgy, and just misbehaved enough. Ask Jake Dobkin if any of this resonates. It's gotten a lot more sanitized since then and it's a shame.

But there is a nighttime teens-with-cigarettes hangout scene at Connecticut Muffin and now that I have a girl, it makes me nervous. There's one old stoner in his forties who's always hanging with the girls. He's like the Matthew McConaughey character in Dazed and Confused.

You've said that you soon expect to be moving south, towards Windsor Terrace and/or Graveyard Heights. Under what circumstances would you consider leaving South Brooklyn entirely? I have no plans to move. If we have to sell for some reason we would go to Windsor Terrace because I like how quiet it is there and there are good schools, but we have no plans to sell. And this is the first I’ve heard of the term “Graveyard Heights.” That’s what sucks about Brooklyn now, all the cute neighborhood names.

In a recent New York Times article, you advocated a "Lord of the Flies" approach to parenting. This is intriguing. Could you tell us more about how you've put it into practice? This is just a handy way of saying that children learn things when they have to work out conflicts. Basically my mantra is that of my mom and her generation of mothers: “Only intervene if there’s blood.”

The Park Slope Food Coop combines the fun of shopping for groceries with the challenge of joining a Stalinist cadre. You likened joining to going to an A.A. meeting. Are you current on your shifts? If not, where do you do your shopping? We are suspended because my husband owes two makeups and our grace period, during which we can shop, ends imminently. I refuse to do his make-ups and it will probably get us kicked out (although it is actually very hard to get kicked out of the Coop). When we can’t handle the Coop we go to Key Food or Union Market.

Ten years ago, you pioneered the sex-columnist-to-media-sensation move. Do you have any advice for women like Julia Allison, who have followed in your wake? The Sex-columnist Ghetto is only slightly more pleasant than the Warsaw Ghetto. Do different things so you don’t get stuck in it. You have to build a writing career and if you play your cards right, your career will outlast your singlehood.

Besides your novels, you've also published a guide to Sex and The City. How'd you feel about the last movie? Please predict the plot of the coming one. I enjoyed the last movie but I liked the more downtown, early episodes of SATC. The movie was a little glitzy for my taste. I know nothing about the new one.

Please share your strangest Only in New York moment. A boyfriend and I were having an over-verbal fight on a Western street of the West Village, in front of a large industrial-style building. This was during the late nineties when those blocks still had a little bit of edge. Suddenly we heard a woman’s voice through a window: “Can you please keep it down? My son is trying to sleep.” We moved all the way down the block and continued arguing. We heard a rap on the window. “I can still hear you!” Her loft stretched an entire city block. There was no escaping her.