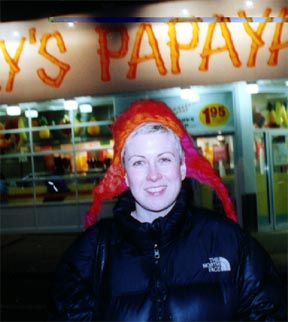 At this moment, the first five issues of Amy Fusselman's Zine Bunny Rabbit

, dating back to the mid 90s, are selling on Amazon.com for $750. Although Fusselman thinks it'll be a while until anyone ponies up that much cash, she has thought about what she'd do if the seller manages to pull off the sale, "What it might mean is that I'll go back to Kinkos instead of working with a publisher." For $750, wouldn't you?

What are some jobs that you've worked to support your writing?
I had lots of crazy jobs. My first job in New York was folding towels for towel folding shoots. The wife of a friend had a connection and on my second day in New York she called and told me she had this towel gig. I went over and there were a lot of towels to fold the first day. You'd be surprised how many towels are documented in magazines and advertising. And these were exciting, fluffy towels to dry your body off after an exciting steamy shower or a long luxurious bath. It was come in, fold, break, fold, primp, puff, fluff, and fold. There's a lot about writing and towel folding, but I'm not sure I can articulate it. It's all in the towel, really. I wasn't there long, though, which is a theme with my employment. My husband and I have an understanding between us that I'm unemployable.

I also had a really grim job writing headlines for a company whose name I completely blocked out. Let's just say that there are millions of people on some floor on Broadway writing help wanted ads. My job was to write the headlines and there's really only one headline for help wanted ads, which is, "Come join our team." If you start looking around you'll see that "Come join our team" is like a particle of the air you breathe. It's everywhere. EVERYWHERE. After I'd written "Come join our team", "Join our team", and "Join us" there weren't a lot of other places to go with it. I'd say it was a poetic challenge. I actually got canned from that job. I couldn't even leave quickly. I just got canned. I can't even look at a help wanted ad now or I'll break out in hives.

Your first novel, The Pharmacist's Mate, was published after you entered a contest on McSweeneys. Was the novel already written before you entered the contest or did you write it specifically for the contest?
I entered in the proper way. They didn't ask for a whole manuscript. Only a synopsis. I entered it and I never heard back. I was sort of obsessed with it. I was a huge fan of McSweeneys and thought it was so cool. I was on their website everyday. Finally, I just started writing these little letters over there. "How's that contest coming?" And nobody answered them. I was home with my mom and this was the summer that my dad was passing away. I decided that nobody was listening and I didn't care anymore and starting writing letters like, "Dear McSweeneys. My dad is dieing." Long, wild letters. Finally, six months later, I got an email from Dave Eggers that said, "Go write that book about your dad."

It's been over five years since The Pharmacist's Mate came out. What did you do before starting on your second book, 8?
The Pharmacist's Mate was done. Then I did a manuscript that went back into the drawer because I wasn't happy with it and I started 8. Then Pharmacists Mate came out in paperback and there was some postponing and then it was 2003 and I worked on the other manuscript for a year and then I started 8. Plus, I had another kid. That making humans thing takes a lot of time.

What were you going for with 8?
With Pharmacist's Mate the idea was dealing with grief and loss and 8 is very different. I'd say it's more of a happy book. Almost against its own best efforts, it's a happy book. It's a feel good book about having had a pedophile.

What's your writing process like now?
The process now is a matter of running away from my children and if I can successfully do that and find some place where there's not too many screaming people or pile drivers, I'm pretty much golden.

Please share your strangest "only in New York" story.
I wrote about some of the cab rides I've had in 8 and those are among the wildest New York experiences that I've had. I was in the West Village in a cab once and the driver stopped, got out in the middle of the street without saying anything, dipped in front of the cab, came back in, and shoved a ten dollar bill at me through the window. He did it in such a way that I could tell that he was taking it off a stack of bills and without any language I understood that he had stopped the cab to pick up this stack of bills that he found on the street. We preceded and I was laughing, screaming, "Oh my God!" We went down the street and he said, "That's not the first time that's happened to me." That's insane! I love New York and that's all there is to it.

Which New Yorker do you most admire?
It's not a New Yorker, but I love Gray's Papaya. It's the little hotdog stand that could.

How would you change New York?
I'd put us under a fabulous Teflon bubble, pave all the streets with gold, and have it rain jewels. There'd be more fabulous water parks. It'd be a cross between candy land and the Tomb of King Tut.

Under what circumstances have you thought of leaving New York?
I'm in the garment distract and there's not a lot of beach vibe over here, so I'd love to live near the beach, but I don't see how that can happen with my unemployment problem.

What's your idea of a perfect day of recreation in New York?
It's not G-rated. Let's leave it at that.

Amy will be reading at McNally Robinson on Monday, June 18th at 7 PM as part of their on-going Indie Press Night series.