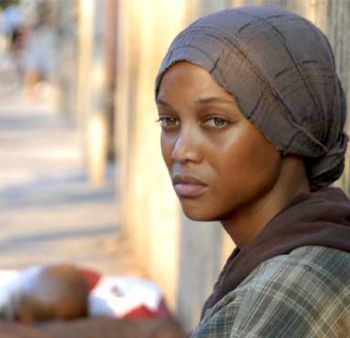 America's Next Top Model is back in New York and in its second episode, which airs tonight, things are getting a little bit real. The episode brings the fourteen newest model wannabes to the not always fashionable streets. After the troupe mingles with the tourists at their fashion show in Times Square, it's off to their first photo shoot.

For regular watchers of the show you'll know there's always a theme to the shoots, well tonight...they pose as homeless people. For those who recall the 2001 flick Zoolander, you'll know this isn't the first time homelessness and fashion have converged on screen. In that movie, Will Ferrell's character Mugatu designs a line called Derelicte, described as "a way of life inspired by the very homeless, the vagrants, the crackwhores that make this wonderful city so unique."

Off-screen Mary-Kate Olsen has made that homeless-chic look into a trend. But you just know Tyra is going to make this serious -- see video of her going undercover as a homeless person for her talk show, here.

Check out the awkwardness tonight at 8pm on the CW. And read these recaps from fourfour and Television Without Pity to catch up on last week's premiere.