"American Psycho: The Musical" Gets Three Out Of Four Chainsaws

The opening number in American Psycho: The Musical begins with a recording of a bloodcurdling scream and concludes with a shirtless Patrick Bateman jogging down the aisles of the Gerald Schoenfeld Theater shooting fake money from two plastic guns. “You bought it allllllllll,” Bateman sings, referring variedly to the facade that obscures his homicidal rage, trickle-down economics, and tickets to American Psycho: The Musical. A chorus line robotically shimmies in shoulder-padded blazers: “Uh, oh! Uh, oh! Uh, oh!”

At my preppy mid-Atlantic college, there were two kinds of bros who enjoyed American Psycho (and they were almost exclusively bros—the story itself is at best a weak satirical celebration of the White Male Id): Those who kept it in rotation with Goodfellas and The Big Lebowski and whatever else they half-watched while padding around the house in mesh shorts, and those who knew they were destined to make and inherit obscene amounts of money and used “I have to return some videotapes” as a punchline before they threw a flaming toilet off the roof of their frat house.

This two-act musical version will appeal to both of these fans—it is glitzy and ridiculous and extremely entertaining. It is also 40 minutes too long, and its last-minute attempt to twist the story into a romance makes you wish there was less sighing and more dying. 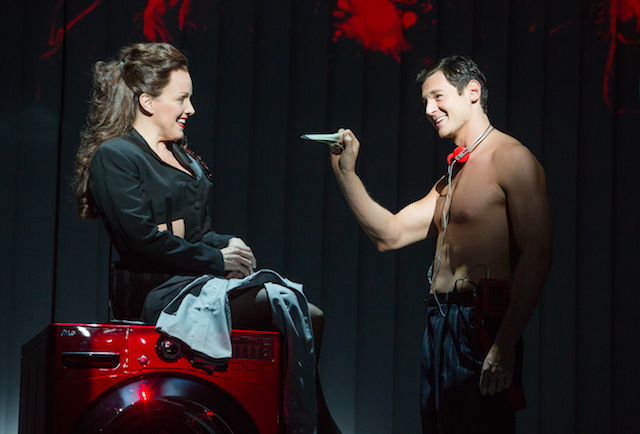 The first act is tighter than lead actor Benjamin Walker’s abs, which are visible for 1/3rd of the entire show. Duncan Sheik’s Tony-award winning talents are evident in numbers like “Cards,” which turns Bateman’s business card freak-out into a catchy, clever bit that almost approaches The Simpsons' flawless Broadway imitations. Helene Yorke as Evelyn Williams, Bateman’s fiancée, leads a jolly paen to materialism and somehow elevates the act of rhyming “Red wine” with “Calvin Klein.”

When Walker roars at an audience member for shaking the ice in their drink (“STOP RATTLING”) and the first act ends with that delightfully brutal Huey Lewis-scored axe murder (complete with red confetti and a plastic curtain to stop the spatter) everyone feels in on the joke and you feel great about spending money on a play that hews too closely to a film based on a Bret Easton Ellis novel.

The second act is more sobering. Why is Patrick Bateman, who we all just cheered as he murdered dozens of friends and acquaintances, singing “I just want to live happily ever after”? Who thought rhyming “Hardbody” with “Hardbody” (song title: “Hardbody”) was a good idea? Isn’t Patrick Bateman’s mother supposed to be in a sanatorium, not on a bench in Central Park telling his secretary, Jean, what a lovely boy he was? Are we supposed to actually care about American Psycho?

Theo Stockman, who plays Timothy Price, Bateman’s best friend, has enough one-liners and swagger to feel like an original character, an improvement on an interpretation of a successful film. The second act’s attempt at adding another, albeit tiny, dimension to the plot feels inexplicable and forced, especially when so much of the play emulates the film, right down to Walker’s Christian Bale-as-Bateman accent.

At one point, when Bateman makes one of his many references to real life serial killers, a woman behind me whispered to her companion, “Is this based on a true story?”