'American Gods' Is A Weird & Bloody Journey Worth The Ride

Let's just list what happened in the pilot of American Gods, Starz's adaptation of Neil Gaiman's epic novel that premiered last night: Vikings landed on the shore of a new world sometime in the distant past and started murdering each other in the hope of getting a breeze going. A man got out of prison early only to learn his wife was killed while in the middle of giving his best friend a blow job. A grifter deftly conned his way into a first class trip and then conned a stranger into becoming his personal bodyguard. A self-professed leprechaun plucked coins from the air ("with panache") and started a bar fight. A strange device transported a man into a digital limousine where an impatient vaper interrogated him (then had his faceless servants nearly kill him).

And oh yeah, don't forget about the woman who physically devoured her date (Bill Murray's brother, aka zipper musician Freddy Rumsen) in the middle of some very graphic sex (while surrounded by enough candles to warrant several fire code violations). 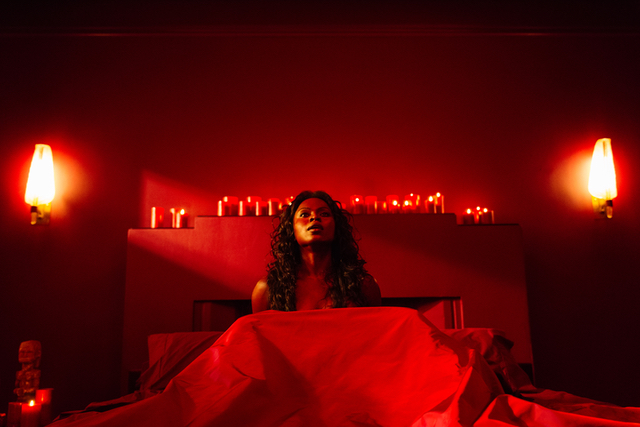 The word I imagine most people will associate with this show is WEIRD (in all-caps, no less).
It's completely artsy-fartsy in both execution and narrative—it's not interested in holding your hand as you enter its fully-realized universe. It has big things to say about the immigrant experience, the power of mythology and belief, and the forming of America. It's also a gothic love story, a collection of colorful short vignettes around similar themes, and possibly the show with the most full-frontal male nudity in television history.

If, like me, you haven't read the novel the series is based on, you may be wondering what the heck you just watched. What do all these stories have to do with each other? Are we supposed to take everything we're seeing literally or view it as symbolism, parables and tall tales brought to life? But having some sort of rational grip on the plot of American Gods, at least in the early going episodes of this first season, seems like a secondary concern: this is a show made for people who love atmosphere, direction, and vision. As HP Lovecraft said, "Atmosphere, not action, is the great desideratum of weird fiction." And from the comically-bloody cold open to the final scene of Shadow Moon gazing upon the pulverized remains of the people who just tried to hang him, this is undoubtedly one of the weirdest shows I've ever seen.

The main plot which will form the backbone for the season, such as it is, revolves around Shadow Moon (Ricky Whittle), an ex-con who goes to work for the mysterious Mr. Wednesday (Ian McShane). The two travel around the country seeking supernatural allies for a war between the Old Gods who captured the imaginations of centuries of travelers (we meet Bilquis, Mad Sweeney, and Mr. Ibis in this episode) and the New Gods who represent the obsessions of the present day (including Technical Boy, the god of technology who we meet in the limo). Just as Shadow and Wednesday's journey is interrupted by various tangents, so too are there frequent detours from the main narrative to explore the lives of the various gods, who have been integrated into America much like the immigrants who brought their myths here.

Aside from Bilquis' (Yetide Badaki) show-stopping consummation scene, the biggest standout is McShane, the Deadwood star who has been wandering the television desert since the end of that brilliant show looking for a role which suited his considerable gifts. He's found a role worthy of him here: everything Wednesday says seems clothed in deception and Shakespearean intrigue, but McShane adds such humor and playfulness that he steals the scene anytime he's there. What could have been infuriating—a character who almost wholly talks in riddles and suggestions—instead is the charismatic center. Shadow Moon seems purposefully understated and somewhat passive by design, so it's a good thing he's paired with such a vivacious character, bringing out the best in both leads.

But even that is overshadowed by the feel of the show, which has been brought to life by Michael Green (writer of the likes of Logan, Alien: Covenant, and Blade Runner 2049) and Bryan Fuller. Fuller has already proven himself to be a television wunderkind with critically acclaimed, magic realism-tinged series like Wonderfalls, Pushing Daisies, and especially, the brilliant Hannibal. For fans of that last show, this is a must-see program: it is the natural progression of Fuller's gloriously and profoundly pretentious style. Hannibal fannibal Matt Zoller Seitz articulated it better than anyone else could:

Given Fuller’s increasingly voluptuous and polymorphous sense of spectacle over the years, this seems all of a piece. There were scenes in Hannibal’s second and third seasons that made blood, food, and unclothed bodies seem like alternating courses in the same never-ending feast. The close-ups of Hannibal Lecter’s culinary creations, his handwork as a killer, and his rivals’ gruesome gallery installations built of human bodies were all lit and shot in ways that stylized them and made them seem like parts of the same continuum. That’s the case here, too. Close-ups of poker chips, quarters, gold coins, blood, severed limbs, goulash, hardboiled eggs, dandelion stems, and rain-soaked earth are gorgeous on their own terms, but they feel like propositions as well as images — attempts to articulate a worldview that cannot be fully explained with words.

We come into new shows expecting to immediately understand what kind of show it is (doctors doing their best under life-or-death circumstances, or superheroes trying to figure out if they're insane), or to have some idea of where it is going (like Breaking Bad and its Mr. Chips-to-Scarface promise). I have no idea what the destination is here, but like Shadow and Wednesday's road trip, American Gods is about the journey—absorbing all the bizarre and unforgettable details, all the gruesome and tawdry encounters, and ultimately, exploring the promise of America and the limits of faith.

In future episodes, we are introduced to even more gods (including Peter Stormare as a checkers-playing Slavic god, Gillian Anderson as Lucille Ball impersonator Media, and Kristin Chenoweth as Easter); Jeremy Davies also plays Jesus, and Dane Cook plays Shadow's deceased best friend. There are a lot more tangents, and blissfully surreal depictions of the afterlife and harrowing dreamscapes. And some things get a lot more confusing with the plot, but episode four is an emotionally complex tour de force for Emily Browning as the oft-talked about Laura Moon (and an episode which really shows that Fuller and Green know what they're doing with the material). There is over-the-top violence (a man is split in half after being kicked in the crotch) and over-the-top sex scenes (including one particularly intense one featuring an old god with flaming eyes).

But for those wondering about the faithfulness of the adaptation, I asked Garth Johnston, a devotee of the book, how he thought the first four episodes of the show compared to the novel:

After some minor quibbles (that's not how I saw that character in my head!) it plays pretty great, actually.

Neil Gaiman's book isn't exactly a massive tome, so I was initially concerned with how much story Bryan Fuller and co. were going to burn through on Starz, and that they'd do it too quickly. I shouldn't have worried! I should have remembered that Fuller stretched the first two seasons of Hannibal out of just a few lines in the book Red Dragon. And at the pace Gods is going we've got seasons of mythic mayhem across North America to look forward to. Really, this adaptation appears—despite a few new baubles and a few changes of scenery—to be a devotedly faithful one. Far more faithful than this week's other big novel-to-peak-TV-drama, The Handmaid's Tale, where no detail is too small it can't be explained to the audience twice. In fact, my concern now is that American Gods might be too faithful to a fault. Things are going delightfully slow right now (delightful for readers at least), and with so much intense imagery to soak up, I worry it might be hard for newcomers to stay focused.

To that end: Hey! Newcomers and non-readers! Remember back when you first started watching Game of Thrones and your friends who had read the books, or watched more than you, kept telling you to stick with it? That it was going somewhere? And then you stuck with it and it was worth it? This is the same kind of situation. Stick with American Gods. The source material is going great places and what seems confusing and even boring now is actually just the show's very talented team collectively cracking their knuckles and sitting down to play.