Amazing Photos Of LADEE's Rocket Launch Into Space From NYC

Last night NASA's Lunar Atmosphere and Dust Environment Explorer (who we just call LADEE) launched in to space aboard the Minotaur V rocket from a launch pad in Virginia. The event could be seen by many on the East Coast... even those of us here in light polluted New York City. Former NASA photographer Ben Cooper took an amazing photo from the Top of the Rock, which he noted is "about 200 miles north of the launch pad." Clear skies, full hearts, can't lose! 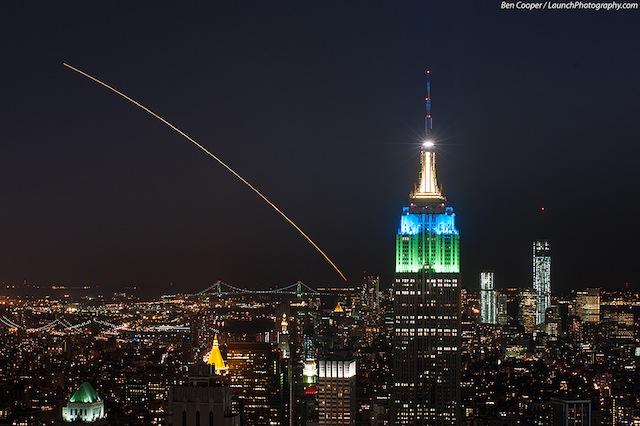 Here's a photo of LADEE taken from the Bronx:

#LADEE from the bronx pic.twitter.com/0wGXIaeS6F

And you can see another view, from the Verrazano-Narrows Bridge, here. Spectators couldn't help but tap their inner Jesse Pinkman, responding with a simple: "Yeah Science!"

Just saw the LADEE rocket streak across the NYC skyline on its was to the moon. Yea Science! #LADEE #NASA #science

According to an update overnight from NASA, they'll be completing a spacecraft checkout over the next few days, but things are looking good and "LADEE is on its way to arrive at the moon in 30 days, then enter lunar orbit." Here's their footage of the launch:

LADEE is a robotic mission that will orbit the moon and "provide unprecedented information about the environment around the moon and give scientists a better understanding of other planetary bodies in our solar system and beyond."

#ladee
#nasa
#photo
#rocket
#space
Do you know the scoop? Comment below or Send us a Tip