Amanda Palmer Tells Us About Becoming A "Kickstarter Millionaire"

Amanda Palmer just kicked the music industry into the future. The musician/artist/performer launched a Kickstarter campaign last month with a goal set at $100,000, which would go towards her new record, an art book, and accompanying tour. It was clear to those who know about Palmer's enthusiastic fanbase that the goal would be reached and surpassed, but last week when the campaign ended, she became a "Kickstarter millionaire," totaling out at $1,192,793.

In her Kickstarter video she declared that this is "the future of music," and has said this project is proof that "major-label refugees" (Palmer had to fight to get off of Roadrunner Records) can go outside of the label system to fund their work. For a little clarity on why being able to crowdfund your projects as an artist is important, in one of her blog entries she references Steve Albini's "The Problem With The Music Industry" essay, which breaks it down and explains why major label bands are pretty fucked once you tally the numbers. In the same entry she breaks down her own numbers, noting that she might be left with just $100,000 from her Kickstarter funds after all this, but every decision along the way will be her own—there's no label controlling her and no one skimming off the top.

So, even if you aren't one of the devoted that donated to her project, you should be excited, simply as a fan of music and artists. Palmer tells us more about the project, and what's next, below.

When, and why, did the Kickstarter idea come into play? Well, crowdfunding always seemed like the obvious option to me the minute I left the label. I was already practically running my own whole operation and staff, and why bother getting people stuck in the middle when you can go direct? Kickstarter just came into play at the perfect time since it became a common language and platform very quickly. I've watched it grow in the past two years— I've been using it from "what's that? kick what?" to almost every band I know saying "yeah, we're thinking of kickstarting the record in late July" and nobody blinks an eye. When it's a verb, it's a force.

You made over a million dollars in the end. You have an amazing fanbase, but did you expect it to go so overwhelmingly well? I've learned not to expect anything. My hope was that it would hit a million, but we budgeted in for closer to half that, and we would have dealt with the shifts if it had made less. One thing I've learned is that you don't take anything for granted, especially people's loyalty. You have to appreciate it at every single moment, and that's part of what sustains it. But my dreams are always huge, and I always shoot high. My fans ride partly on my enthusiasm, I think. I get so excited for what can happen, and then they get excited to make it happen, and we infect and inspire each other like a beautiful fucking art snowball.

What will happen to the overflow funds? Basically, the money goes straight back into creating and making the products more incredible. And whatever's left over goes into promoting the record when it's released, including paying for more videos, making the tour more beautiful, and so on. No nose jobs and tummy tucks for the band. Not yet. [Read Palmer's backer update about the overflow funds right here.]

While your project seems a perfect fit with Kickstarter, they are catching flack for some projects using the platform lately (namely, the Pebble Watch). And we recently took a little bit of issue with a woman here in Brooklyn who used Kickstarter to, essentially, fund her birthday party, which was in the form of a Rainbow Parade. Do you see any lines that need to be drawn in using Kickstarter? It's the internet, baby. Which means it's the wild, wild west. Kickstarter is in infancy and is still figuring out what it is. I remember going to Twitter early on, before it went massive, in around 2008 or 2009. I got a tour from a girl who worked there who was a fan of Neil's [Neil Gaiman, Amanda's husband] and mine. I asked her what she really thought was going to happen with Twitter and she looked me squarely in the eye and said: "It's going to change the world." I think she was right. I think Kickstarter may as well, once it settles into itself. Since they choose the projects, it's all in the hands of the people slaving in the Kickstarter offices to choose what even gets approved as a project, but the idea of crowdfunding is what's essential. Once people get used to the system, the platform won't matter as much. People will understand that crowdfunding is a concept that can make art and life and energy possible where it wasn't possible before... and we're off to a running start. 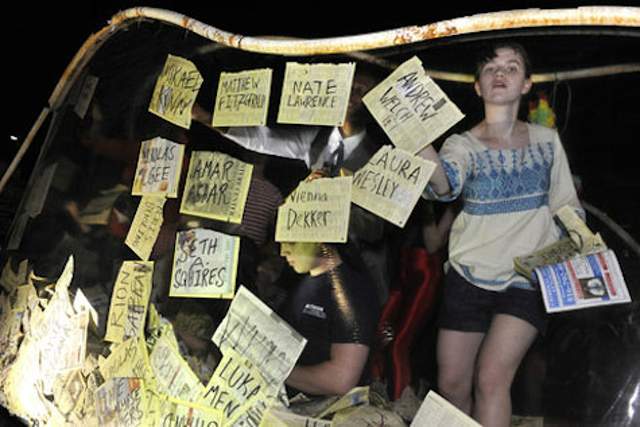 And finally, how was the big Street Party in Brooklyn you held last week to celebrate it all? It was EPIC. We wrote all 24,000+ backer names with Sharpies in dozens and dozens of used phone books... one page per backer. Tons of people helped us secretly do this, it took hundreds of man hours. Then we held a webcast in a parking lot in Gowanus where we towed a giant tank-like enclosure. The band dressed in vintage 1920s swimsuits and stayed in the tank for four hours and with the help of the crowd, showed every single name to the assembled street party and webcast while a DJ cranked music, including the record, and crazy street performers provided halftime entertainment. Truly a memorable fucking party. Then we ran ten blocks away and did a post-midnight celebration show at a loft for high-level backers, who we surprised with tickets two days before, hoping they could make it. The whole thing was sort of Yoko Ono meets Burning Man meets Subterranean Homesick Blues.

#amanda palmer
#interview
#kickstarter
#the future of music
Do you know the scoop? Comment below or Send us a Tip