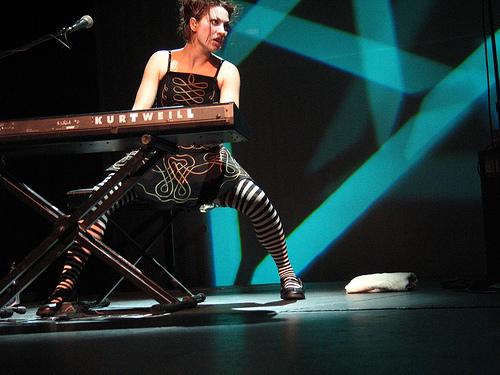 Amanda Palmer coined the term and genre "Brechtian punk cabaret" for her band The Dresden Dolls so that critics wouldn't describe them as Goth. After two albums with the Dolls and a live show that has earned a reputation for doubling as a circus act, she is just beginning her first tour on her own. Her upcoming solo album sports the Twin Peaks-inspired title "Who Killed Amanda Palmer?" and will be released in September alongside a book with same title that is a collaboration between Palmer and graphic novelist Neil Gaiman. Tonight Amanda brings her unique brand of theatricality into town with a show at Spiegelworld. She talked to Gothamist last week about blogging, opening herself up to new collaborations, and what Britney Spears's next tour should look like.

You keep an incredibly personal blog where you interact with a lot of fans and tend to share very intimate details of your life. Do you ever get in trouble for oversharing? Only with my mother. I think she doesn’t do it so much anymore. She used to chastise me not even for writing about family things, but career things. She would come at me with, ‘You don’t write in your blog that Jimmy Kimmel looks stoned, Amanda!’ And sure enough the next day my publicist calls me up and is like ‘You have to take that off your blog. The Kimmel people are freaking out!’

Sounds like your mom would make a pretty good manager. Sometimes my mom is right and I hate to admit it. It’s a tricky thing--the blog. Because it’s not a political blog and it’s not a ‘Oh my God! I went shopping today. It was really awesome!’ It’s not that kind of blog either.

No, it’s not. I just read the Sponge blog (a recent entry where Amanda gives the blow by blow of going to the hospital to have a menstrual sponge removed.) That kind of stuff is really personal. A couple of people told me they were not into the sponge blog. I think the beauty of it is that I can do that and I can treat it like a conversation that I would have with my best friends. And then it sort of acts like your filter. Because the people who aren’t into it and don’t want to read it don’t have to it. But with the people who stick around and comment and sustain a dialogue, it turns into a real relationship with the fans. That’s kind of why I do it and why I love it.

I imagine it’s the sort of blog where you’ve had loyal commenters and readers for years. Totally. I wouldn’t really enjoy it if it weren’t for the comments. I really like that it feels more like a conversation and less like a ‘Check me out, this is what I’m doing. Check me out’ kind of blog. Other bands are like, ‘Thanks for coming to our show. Next week we’re gonna be at the video awards. Make sure you vote for us!’ You need to do that sort of stuff, but it’s so impersonal. For myself and bands that I am into, I really want to know how they’re dealing with their lives. That’s what keeps me interested when it comes to blogs. Neil (Gaiman)’s blog is fantastic. David Byrne’s blog is totally incredible.

So how has touring on your own started off? Pretty beautiful, actually. I’m in Los Angeles and the show last night was the first night of tour so that was nerve wracking. But honestly, it was really fucking great—fantastic show.

You looking forward to the New York show? Yeah, for a lot reasons. The show itself is going to be fantastic. I’ve done a couple of residencies at the Spiegeltent in Edinburgh and in Melbourne. So even though it’s a slightly different tent, it feels like home to me.

You performed at the Spiegeltent at the Fringe Festival in Edinburgh? Yeah, I did a residency last August at the Fringe and then this past winter in December, I did a week of shows in the same tent but in Melbornne.

What was the Fringe experience like for you? I hear it’s really incredible over there.
It’s fucking awesome. It’s like an entire city taken over by artists basically. It’s the highlight of my year every year. I try to get there every year if I can.

Did you do the thing where you go out onto street corners to promote your show?
I actually did do that this year! I have a choreographer and an artistic director who’s coming on tour with me all year and dealing with everybody who’s on stage with me because I’m doing up a whole strange, theatrical show. And he was there with the cast and we were sort of prototyping my tour for this year with a bunch of Australians. He and I got dressed up like freaks one day and just walked up and down the Memorial Mile and handed out fliers. I don’t know how many people we actually got into the show that way, but we looked so awesome that we got our picture in the paper--even if people didn’t know who we were. Our name wasn’t even there. We were in the paper and it was just sort of one of those ‘check out these freaks!’

I didn’t realize that you were doing a big such like your Dresden Dolls tours. Did you consider stripping it down for your first big venture alone? Well, I’m doing a handful of shows this week and those are pure, solo piano. Then starting in late September, I’m doing a big European and big States tour and bringing 11 people with me. It’s gonna be a lot of people on stage. Most of them aren’t actually musicians, they’re physical theater people.

Lots of costumes? There’s a bunch of costume changes. It’s like Britney on acid.

Britney’s last tour was kind of like Britney on acid. Conceptual—Britney as conceptual.

Maybe for her next tour she’ll strip things down. She’s been through a lot. Poor Britney. Britney should learn how to play guitar and should just do solo acoustic. I would see that. If I heard Britney was doing solo acoustic, I would go.

How related to Twin Peaks is Who Killed Amanda Palmer? It didn’t start out being bigger than that. It started out just as a hilarious name. I’ve always been a huge David Lynch fan so it made perfect sense to make that joke. But it’s actually one of those things that worked backwards once I started thinking about the title and living with the title and I lived with it for a long time. I chose the title ages ago and then the record got delayed and delayed and delayed—four times. It started to take on a life of its own and I started to create meaning around it. That was not planned, but really fun actually. It’s not like I retroactively turned into a concept record or anything. But I definitely let it influence the artwork and influence the videos and I’m putting a book out that comes out right after the record called Who Killed Amanda Palmer?

With Neil Gaiman, right? Yeah, that’s fully conceptual and totally based on the idea of me being dead. So it’s funny that if I hadn’t picked that title, I probably never would have thought about doing the book of photographs and I wouldn’t have reached out to Neil Gaiman and I wouldn’t have found a fantastic friend.

I saw there were four blogs (yours, your assistant’s, the photographer’s, and Neil’s) covering it at once. It looked like you guys were having a lot of fun. We totally hit it off. He’s definitely my type of people. He’s a great guy.

How did (St. Vincent’s) Annie Clark end up collaborating with you on the track you guys did for this record? We became friends because my sound guy Dave had been working with her and turned me onto her record. And I thought it was so fucking good. So I went to see her live and started following her. We met up with each other a couple times and started a little friendship to the extent that you can have a friendship when you’re two totally touring people. Then while I was working on my record last spring, I started playing around with different ideas and I was sort of at a lull. The record was half-finished and I didn’t know what the fuck I was doing with some of the songs. I went through a couple of months of experimenting with back-up bands. I saw that I was going to be in New York when she was going to be in New York and I said ‘Let’s just do something! I had no plan. ‘Let’s just book a studio for the day and just hang out. Maybe we’ll do a cover song, maybe do one of your songs, maybe do one of my songs.’

I was really coming off a really positive collaboration experience with Jason Webley--the Evelyn Evelyn record. And I had never really made a record with somebody and written songs side by side with somebody and just been in the studio and played around with instruments and cut stuff. That was mind opening for me. Usually with Dresden Dolls, when I have a song, I have a very specific idea of how it sounds. We go in and we cut it and there’s very little room for free-floating spontaneity.

So Annie and I booked a studio date and the day before I thought of ‘The Carousel Song’ and I thought, “Oh my God, that would be so easy and so perfect. Let’s just do it’ So I called her and told her to look at the lyrics. We cut the whole thing in like three hours. And we took two hours to mix it. That was our day.

It sounds like it’s a pretty exciting time for you right now. It is an exciting time. If the rest of the tour goes like last night, I’m golden.