Amanda Bynes, who was unable to board a private jet recently, now has bigger problems: She was arrested at her Midtown apartment tonight.

According to NBC New York, "Officers were called there for a report of a disorderly person Thursday night, law enforcement sources said. When officers arrived at Bynes' apartment on West 47th Street, they encountered Bynes, who threw a bong out the window. She was arrested on a charge of reckless endangerment."

The Post says that the arrest occurred around 7:40 p.m., with her building staff contacting the police because she was "smoking some substance from a bong in the lobby... When cops went to the door of her 36th floor room, she chucked the bong from the window as they watched, sources said." No one was hurt.

WABC 7 reports that Bynes had allowed cops into the apartment but belatedly realized the bong was in sight, so she tossed it. Totally normal reaction! She also was hit with tampering with evidence, and criminal possession of marijuana. Oh, and "Police say that there was a lot of marijuana smoke in the apartment."

UPDATE: Wow, Bynes may have been channeling Reese Witherspoon. TMZ's account: "We're told Amanda went ballistic when officers arrived -- kicking and screaming during the arrest, and yelling ... 'Don't you know who I am?'"

The NYPD had no comment (even though spokesman Paul Browne loves talking about her!), but apparently she got a psych evaluation at Roosevelt Hospital (she may have been talking to herself) and was then taken to a Midtown police station. 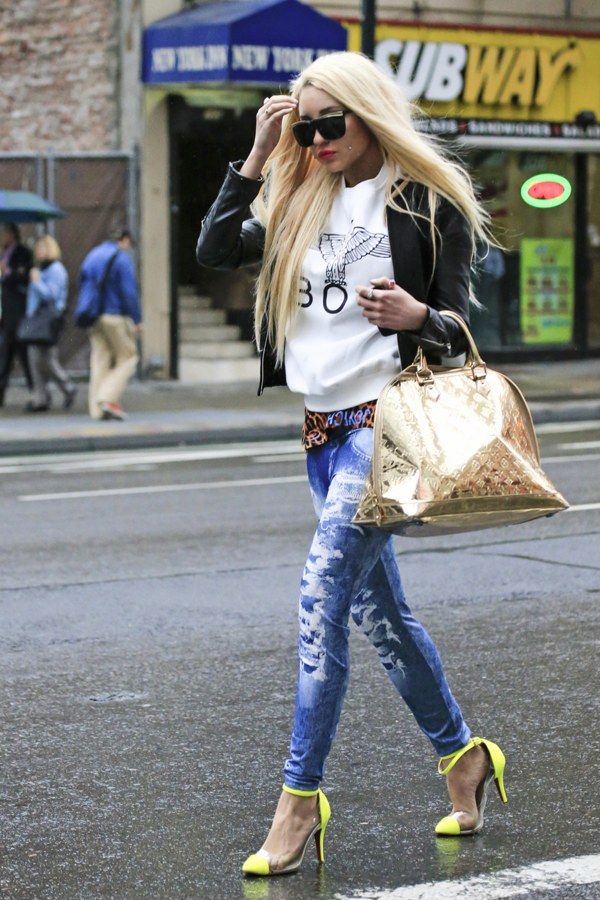 Bynes, once a rising tween star, has had many troubles recently—from multiple hit-and-runs in L.A. to multiple reports of pot smoking in her car, at the gym, and in her NYC apartment. Her behavior has also been bizarre, Tweeting, "i want @drake to murder my vagina," shaving partially her head, and Tweeting revealing photos.

In Touch just published photos (here's a glimpse) of the squalor-like conditions of her NYC apartment, with the photographer claiming, "Weed was everywhere. On the bed, all over the floor." Oh, and also allegedly coke, though Bynes told In Touch, "They’re the ones into drugs, so they bring drugs, but I don’t do them." Byne then claimed In Touch Photoshopped the pictures:

That's not my bed! Those aren't my toes! My toes are pedicured! I just did an exclusive interview with intouch last week, now they bought fake altered photos by that ugly black man in the photo or someone who knows him! They used an old shot of me on the cover with a bad angle of my old nose before I had surgery to reshape my profile and to remove the webbing from my eyes. I have to sue because that's not my apartment, those aren't my clothes! They morphed photos of my face onto someone's body to ruin my life! I have to make a big deal of this and sue because that's not me! I care about my appearance so I have to defend myself! I look like a different person now that I had surgery! Why did they put an old shot of me on the cover? I don't look like that anymore! I only want photos of my gorgeous new nose on the cover of tabloids and real magazines! The photos in this issue are fake and mocked up! I don't care enough to keep talking about it. Just assume that I f***ed the boyfriend of the editor of intouch because they f***ing hate me!

: Bynes had her time in court and was released on her own recognizance. Her mugshot shows that her head is shaved.

#Amanda Bynes
#arrest
#bong
#marijuana
#midtown
#pot
#yolo
Do you know the scoop? Comment below or Send us a Tip