Two alt-right journalists interrupted the controversial production of The Public Theater's Julius Caesar on Friday night, with one running onstage saying, "Stop the normalization of political violence against the right — this is unacceptable!" while another in the audience yelled, "Goebbels would be proud!" The crowd booed them and clapped when they were escorted away.

Laura Loomer, who works for the Canadian right-wig site The Rebel, charged the stage, yelling, "Stop the normalization of political violence against the right — this is unacceptable! You cannot promote this kind of violence against Donald Trump!" while calling likening the crowd to ISIS.

Filming her was Jack Posobiec, a former Rebel employee, who screamed at the crowed, "You're all Nazis like Joseph Goebbels!"

Loomer, 24, was arrested and charged with disorderly conduct and criminal trespass. She also filmed herself during the incident:

Jenny Gomez, a Brooklyn resident who was in the audience, told us, "I didn't realize what was happening for a long moment—there had been actors as protestors on stage at the beginning of the play, so we thought it was part of the flow. Then they announced over the PA"—that they were pausing the show—"and I think the audience audibly gasped collectively."

Gomez didn't feel worried during the disruption, "There was security and cops everywhere, so I never felt unsafe but there was some uneasiness," but added, "The play gets progressively more intense; the way it's staged, it make sitting in that seat feel dangerous in an exhilarating way.

"People clapped" when Loomer was removed from the stage, Gomez recalled, "and there was a standing ovation. The stage manager called out the line that the actors needed to start on, and it happened to be, 'Liberty and Freedom,' and the crowd went nuts. In a good way. It was electric."

The production has drawn criticism for its depiction of Julius Caesar as a President Donald Trump-like figure and how its dramatizes Caesar's assassination. The actor portraying Cesar, Gregg Henry, wears a business suit and has a hairstyle similar to the president's; Caesar's wife Calpurnia has a Slavic accent, echoing the First Lady. When Caesar is killed, an audience member said, "[B]lood was spewing everywhere out of his body."

Pushing back on the outrage, which caused Bank of America and Delta Airlines to drop their sponsorships of the non-profit arts group, Public Theater Artistic Director Oskar Eustis, who directed the production, said, "When we hold a mirror up to nature, often what we reveal are disturbing, upsetting, provoking things. Anybody who watches this play tonight—and I’m sorry there’s going to be a couple of spoiler alerts here—will know that neither Shakespeare nor the Public Theater could possibly advocate violence as a solution to political problems, and certainly not assassination."

A few days later, President Trump's son Donald Trump Jr. connected the shooting of Rep. Steve Scalise (R-Louisiana) and others in Virginia with the production. 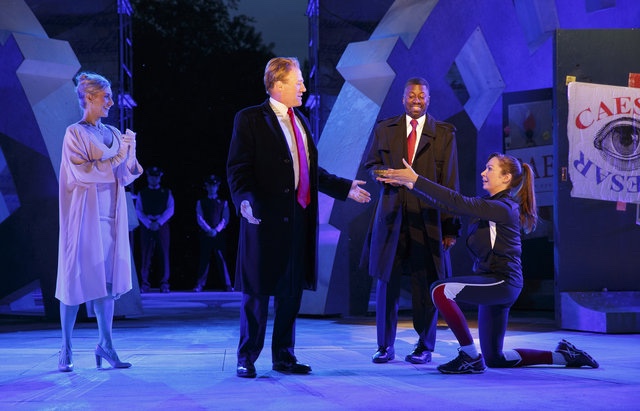 After the Friday night disruption, Eustis issued a statement, "Two protesters disrupted our show tonight; we stopped the show for less than a minute and our stage manager handled it beautifully. The staff removed the protesters peacefully, and the show resumed with the line ‘Liberty! Freedom!’ The audience rose to their feet to thank the actors, and we joyfully continued. Free speech for all, but let’s not stop the show."

Reaction to the stunt was pretty much what you'd expect:

The trolls who interrupted Julius Caesar committed a cardinal sin of the theater: predictable with bad dialogue.

Today, Posobiec says he's entered the Public Theater's lottery for tickets to tonight's show (Shakespeare in the Park is free). There have been both supporters and critics of the show protesting outside:

Gomez says one of the anti-Public Theater protester was yelling, "Hilary masturbates to this production" and other "off-the-wall" statements that most theatergoers were just bemused. She added, "For the record, the play is very much a criticism of using violence in politics, so I think a lot of people are getting riled up for nothing. It just uses an extreme stage picture, which, hey, guess what, aligns with what happened historically in Ancient Rome. "

#jack posobiec
#julius caesar
#laura loomer
#president trump
#public theater
#shakespeare in the park
Do you know the scoop? Comment below or Send us a Tip