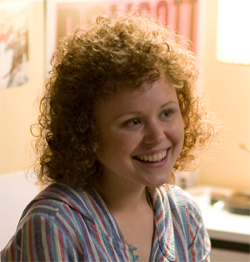 In Gus Van Sant's new film Milk, which opens Wednesday, Alison Pill plays Anne Kronenberg, the brassy lesbian hired by gay rights activist Harvey Milk to take charge of his fourth, ultimately successful, campaign for city supervisor. The 23-year-old's performance was cited by the Times as one of five to watch out for this year: "Women are rare in this movie, but as the campaign gathers momentum, this one holds the screen like a channel swimmer chugging steadily along in a sea of testosterone-fueled flamboyance."

Familiar to New York theatergoers for her Tony-nominated turn in The Lieutenant of Inishmore and, Off Broadway, in Neil LaBute's reasons to be pretty, Pill's film work includes Peter Hedges's Dan in Real Life and Pieces of April. We spoke with Pill recently about Milk, working with Sean Penn, and the stubborn lies of IMDB.

I saw the film this week and thought it was really moving, very stirring. A beautiful movie. I love it. I'm so excited for everybody to see it! It's so rare that I walk out of a film and feel like doing something and feel inspired, and also find myself surrounded by people who feel the same way. It's pretty amazing.

So how much did you know about Harvey Milk before you found out about the project? I knew nothing. I really had a vague notion of the "twinkie defense" and that was it. It's an embarrassment, and once I read the script I wondered, "How have I not been told this story before? How is he not a more important historical figure? And how did my generation miss out on learning about him?" And then I started doing research once I got the role and I've been amazed by the people who knew him. Having Cleve Jones and Anne Kronenberg on the set was amazing. To work and get to know these people who changed so much was pretty remarkable. 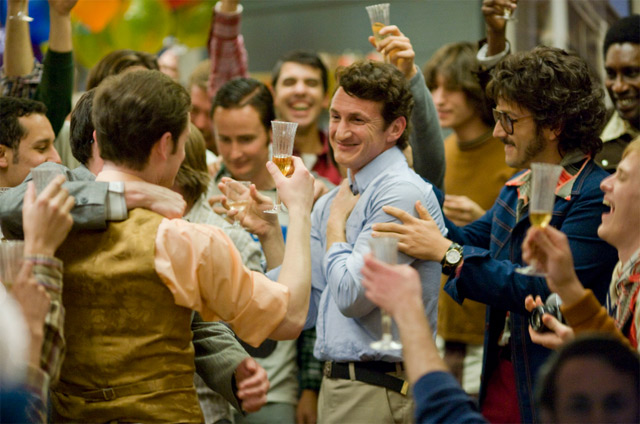 And you play Anne Kronenberg, so how much time did you spend with her? I spent quite a bit of time with her just talking on set and during rehearsal and asking her basic questions about her life at the time. You know, the simple stuff like, what did you guys do after work? Who did you hang out with in the campaign office most? And just to have that resource was amazing. But at the same time, she's actually the deputy director of Public Health in San Francisco, so she's dealing with budget meetings and everything else. And then she would come to the set and see her life being portrayed from 30 years before, so I think it was strange for both of us. Luckily for me I get to play this amazing woman who I actually loved spending as much time as I could with.

How do you think that affected her? This was a movement that was so inspiring but also, in Harvey's case at least, so tragic. How do you think it affected her being on set and reliving these experiences? I talked to her when I was in San Francisco for the premiere there and we were doing press next to each other. And I got to hear a bit about how she was able to come to terms with a lot of stuff that she hadn't dealt with from 30 years before. Because she kind of abandoned politics, you know. She completely changed her life, moved to Washington, and just couldn't believe that it had happened. And I think she feels that there's a huge catharsis for San Francisco in general because that time was so hard, with Jonestown and Harvey Milk and Mayor Moscone. And in the '80s, AIDS hit Castro. We really felt embraced by the city and you could tell people wanted to celebrate the legacy of Harvey, as well as acknowledge the loss.

This was shot in San Francisco, right? Yeah we were in the Castro, and then in City Hall the whole time. All on location. Gus thinks it's essential to shoot at locations that are important to the story. San Francisco is kind of a character in our movie. And it's so important to have people around who can tell you actual stories about the time and sort of soak up the place.

And I gather some of Harvey's contemporaries are actually in the film in certain scenes, right? Yeah, Anne is the court reporter in the scene in the supervisor council when Dan White knocks over the chair. Frank Robinson is there throughout and Tom Ammiano actually plays himself. He is a proponent of gay teachers being able to teach. And he really fought Prop 6 and became a spokesman for gay teachers. And he's now a supervisor in San Francisco.

When you were working on it, did Anne Kronenberg's behavior influence how you played the role or was it more of an intellectual thing, just getting to know her? It did influence me. She had this way of talking—and there's not a ton of footage of Anne out there. There's some stuff in the documentary but there's not a ton, so when I met her I suddenly realized her power lay in her way of speaking, of not letting anybody get a word in edgewise—unless she wants you to. And not in any way yelling or being aggressive about it, but she will make you lean in to hear her. And the power in that, in taking control of a room of rowdy boys is kind of amazing. But at the same time I do really bad impressions. So I tried to take that idea and make it my own because if I tried to do her voice I think a lot of people would have been like... 'What are you doing?' 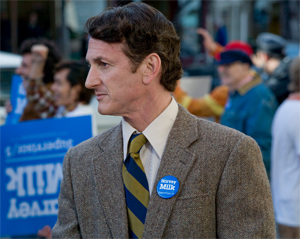 You've worked with other big name talented actors before so I don't imagine you have a lot of anxiety about that, but nevertheless, it's Sean Penn. How did that feel to be in the room with him and work with him? The first day I had no idea what I was doing but it was perfect because I was shooting that very first campaign office scene, in which I'm playing a girl that walks into a room with no idea what she was doing and has to sort of pretend that she does. But there were definite moments when we would all reconvene at the hotel we were staying at, the boys and me, and just sit and go, "I almost forgot to say my line because I was so distracted with Sean." It was a master class every day. And sometimes you sort of have to pinch yourself and say, "Oh my God I have lines to say because I'm in this film as well."

Is there anything you can say specifically that you learned from working with him? It's more of a general impression of the fact that he very consciously leads his own life as Sean, as a human being—and then as soon as the camera switches on he can completely inhabit this other person. And I know he does prep before a movie, but I think he does it extensively to that he can just forget about it. And I think that's an amazing way to work because you're still able to be yourself and to treat it like what it is, which is just acting. I had been kind of expecting a bit of a brooding artist, maybe. And then to come in and realize there's this funny, charming, joking guy who could switch it on and off that quickly...it was such a good lesson.

And what about working with Gus? How does his directing style differ from others that you've worked with? He's amazing and incredibly subtle and you kind of don't realize that he is truly wrangling this big group of personalities, and doing it in such a way that you don't even necessarily recognize it. It was also incredible because I never looked at a single monitor to see the shot over the whole movie. I had no idea what they were shooting, whether I was on camera, whether I wasn't, what the lighting was like... it didn't matter. Were all just living the scene and that's how he chooses to work. He's just this amazing observer who sets you free and makes you feel comfortable bringing in even seemingly crazy ideas; he's totally open to them. He loves it and he can reign it in or not, and you still really notice that this man sitting in the corner totally quiet, totally watching everything is actually this huge presence.

So did he use more than one camera sometimes? Yeah, sometimes. Sometimes a couple. Gus and Harris [Savides, director of photography] work in this amazing way. My favorite part is when Diego Luna enters, the whole scene is played on Sean's back. There's basically just a close-up of Diego for that whole scene. You know people were asking, "Aren't you going to turn around to shoot the other side, to shoot Sean's face?" and he's like, "No, I got it." And just that he believed in the ability of his actors to the point that he's going to let you act with your back... Because you're in the scene and it doesn't matter whether you're walking in or walking out or in a close up or not. You're just constantly on your toes. So it's a really sort of fresh kind of cinéma vérité feel.

So you're going to be back on Broadway next year? I think so.

And that's the Neil LaBute play? That's not quite definite; we're still dealing with stuff. But yeah, I think so. I can't confirm that.

I was looking at your IMDB page at all the upcoming movies you're in. Lies!

Just looking at the films, not the trivia part. No, no, no, but literally there are films listed that I'm not doing.

Really? Yeah. I know, it's really...I've had that question come up and I feel so bad. I can't; it's a really good script and really cool, I would love to do it. I hope I get to do it eventually.

The Other Side? No, no. No, definitely not that. None of those are true. But I am doing the second season of In Treatment.

Well, I'm glad we cleared that up. I know, I wish... I was just having a conversation with somebody else who had a question about what I was doing next. And IMDB doesn't let you change anything, it takes months and years and they still might not change anything.

That's ridiculous. It is ridiculous. I wish I could... It's so embarrassing. Especially on the red carpet or something when you don't get to have an extensive interview and somebody's like, "So, the next three movies..." and I'm like, "Yeah, they're not!"