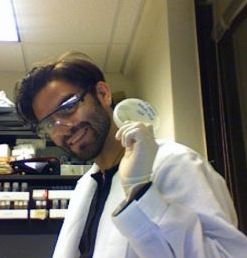 Alexis Gambis is a French-Venezuelan New Yorker, who was raised to use both the left and right sides of his brain equally by engineer/painter Alexis Gorodine and sociology major-turned filmmaker Olga Gambis. Naturally, he went on to study both film and science in college, and eventualy started a lecture series at The Rockefeller University called "Science and Media". He's also part of the Secret Science Club, and now, he brings the first Science Film Festival to New York! The Imagine Science Film Festival kicks off on Thursday, and runs through the 25th.

How did you come up with the idea for the Imagine Science Film Festival? I strongly believe that the best way to communicate science is by wrapping science into stories. While documentaries are wonderful, I think science + documentary = not always a great mix and can lead to fact overload and not so comprehensible, interesting, exciting films. On the other extreme, there are also issues with science "fiction". Far too often, science fiction is not grounded on "credible" scientific facts; flicks of the sort affect both public understanding and perception on very important scientific issues such as stem cell research, etc. Army of clones who destroy the world. Not so great for pushing for more stem cell research.

There is some good science fiction out there though but in general "you do not have to distort science to make it exciting". Science is everywhere, it is part of our everyday lives and activities. The NY Imagine Science Film Festival started with the Rockefeller Film Series screenings and my work with the Secret Science Club. I started showing science films to the Rockefeller community and also my shorts at Union Hall.

Tell us a little bit about what to expect at the festival. Expect to see many films full of imagination but which still hold to credible scientific facts. Expect a 9-day FREE festival which encourages dialogue and a creative interactions between scientists, filmmakers, and science aficionados of all ages.

What films are you particularly excited about? Below are some of my favorites in ISFF '08 - they also all fall under different categories and yet all are able to portray successfully (in my opinion) science in a credible yet compelling fashion. Not only are they entertaining but also educational films as well.

Drama: The Wormhole. A heartfelt story about a boy who searches for a wormhole to travel back in time to save his family.

Comedy: California King. A mattress salesman who employs Newtonian physics to try to pick up girls.

Science in History: The First Vampire. A historical account of the origins of vampirism.

Sci-Fi: Sleep Dealer. Set in the near-future where virtual labor and global digital network rule, 3 strangers risk their lives to connect with each and break the barriers of technology.

What is the best science fiction of all time? My favorite science fiction film is BY FAR 2001: A Space Odyssey by Stanley Kubrick - for its time, it is able to so accurately dissect the relationship between mankind and science/technology - and it does so in such a enigmatic, beautiful, and breathtaking way. Another all-time favorite film - more like science-imagination (than science-fiction) is the Science of Sleep by Michel Gondry.

Which New Yorker do you most admire? I have 2 -- they are both non-native New Yorkers. Paul Nurse (President of Rockefeller University and Nobel Laureate) for his scientific brilliance and his ability to communicate science with such fervor. I love the fact the he co-hosts the science series with Charlie Rose on PBS and for organizing "Insight Lectures" on campus. He also has been very generous with his time: he has seen my film "A Fruit Fly in New York", participated in my series "Portrait of A Scientist" and been a speaker at the Secret Science Club in Union Hall Bar in Brooklyn. A great man and British!

Michel Gondry. I admit to stalking him more than once after some film screenings. He is my all-time favorite filmmaker. He is the a role model. Like Michel, I'd like to live from my passion one day, own an apartment in Brooklyn, make both big-production films and YouTube clips.

Given the opportunity, how would you change New York? I would get rid of FDR Drive and create a tramway system that would go around the island. Create bike lanes separate from the road to avoid cars double parking in them.

Under what circumstances have you thought about leaving New York? New York City becomes overwhelmingly stressful and suffocating at times. Therapy, acupuncture, and swimming are wonderful city remedies but I would to escape momentarily from the overcast of skyscrapers and take a breath of fresh air in Venezuelan Amazonian jungle (which I plan to do after my PhD in 1.5 years).

Please share your strangest "only in New York" story. I think the strangest experience was shooting my first fiction film "Dr Funque and His Petri Dish" last April. A 10-day FULL package of oddities. Strange yet amazing memories.

Best cheap eat in the city. Caracas Arepa Bar in the East Village (7th Street / 1st Ave). "Grab an arepa with avocado, plaintains and shedded beef ON THE GO or for a long-lasting dinner. All this, with the sounds of Manu Chao and the Venezuelan band Amigos Invisibles".

What your idea of a perfect day of recreation in New York? A solitary stroll in Prospect Park in Brooklyn with a Paul Auster or a David Sedaris book reminiscing about my Park Slope childhood days. A 1-hour swim at the Recreation Park Pool. Wine and cheese in a spacious brownstone living room, at a local bar in the area or on a rooftop with 2/3 friends. Movie-Dinner night with friends and film critique afterwards included. No anxieties about "the next day" - enjoying the present moment.

What is your current soundtrack to the city? New York U.S.A (by Serge Gainsbourg). He was the notorious provocateur of french popular music. He was known for his voracious appetite for alcohol, cigarettes, and woman. His calm domineering power to just be himself and break taboos made him a legend in Europe and a cult in America. His song New York USA resonates with me. It summarizes quite accurately my passage in New York. The lyrics go like this : "J'ai vu New York, New York, USA, Je n'avais rien vu d'aussi haut, Oh! C'est haut, c'est haut New York". Translation: I saw New York, New York, USA, I have never seen anything so high. Oh! Its high, its high New York is high. Somehow this gets lost in translation. I really love the simplicity in his lyrics ... I think he really gets to the essence of this city. This song comes into my head when i walk through the skyscraper maze on Lexington Ave in the Upper East Side.

#Alexis Gambis
#Imagine Science Film Festival
#interview
Do you know the scoop? Send us a Tip