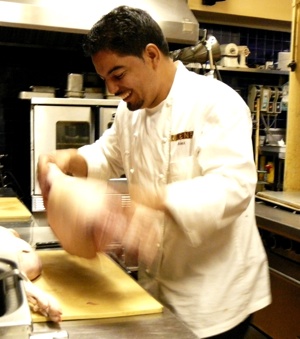 For almost two decades, the 35 year-old chef Alex Ureña has been quietly working behind the scenes at some of New York’s most well regarded restaurants: His very first kitchen job was at The River Café during Charlie Palmer’s tenure. A few gigs later, Ureña was translating the contents of Ferran Adrià’s first cookbook for David Bouley, a chef he spent 7 years with and considers a mentor. Alex Ureña later served as executive chef of Blue Hill, Marseille, and Suba and between gigs in New York managed to clock time in some of the highest rated restaurants in France and Spain. Ferran Adrià’s approach informed the menu of the short-lived Ureña, the chef’s first go around as owner (with wife Martine Gren). The New York Times food critic Frank Bruni awarded the restaurant 2 stars but complained about its interior, calling it “the ugliest restaurant with great food that I know,” and singling out the dining room’s bright lights as an impediment to a good meal. Ureña closed in August and re-opened last month as Pamplona, with the light fixtures now a little dimmer. We spoke with Alex Ureña last week at Pamplona as the chef prepared for dinner service.

Can you describe a dish on the menu that you really like and describe its components?
We’re doing regional food from Northern Spain, from places like San Sebastian, so the poached egg is a good example of that kind of cuisine. It’s based on a traditional poached egg dish from Navarra. We take a free-range egg from the greenmarket, poach it in olive oil and truffle oil, and we serve it with pimenton piquillo and white asparagus. It comes with baby green salad and chorizo cular, a dry, thicker type of chorizo that people eat before the running of the bulls.

Within the community of cooks in NY, you’re known for being a working chef, working behind the line every night. You’re also known for being a nice guy. Does that hurt your reputation, because you’re not running around yelling at diners, or causing scenes in public at the greenmarket?
There’s always somebody trying to say something bad, no matter what you do. I don’t mind what anybody says about me. If it’s true, well, what can I do?

But nobody does say anything bad about you. Among cooks, you never hear that Alex Ureña is going around burning his cooks with spoons heated up on the plancha.
No, I’m not that type of guy. I worked in some of the biggest kitchens here in New York, and I had the chance to work in France and Spain, the biggest kitchens there, too. A few were really tough kitchens. As a cook I never really understood the point of chefs who acted like that, but now that I am a chef, I understand. When you get your own business you begin to understand why some people act the way they do, but I still don’t act like that. There’s no reason.

You came to New York from the Dominican Republic when you were 15 and worked at the River Café where your father was a butcher. You started as a dishwasher. Since you’ve become a chef, have you had anybody work for you who started as a dishwasher who have made his or her way up through the business?
Not a lot of people who are Dominican, but there have been a few. They’re not chefs yet, but yeah, they’re in much better positions than they were when they started, good at their jobs, and they’re at different restaurants learning a lot.

How come you choose to do Spanish food rather than Dominican food?
I like Spanish food. It's in fashion, and I worked in Spain for a while. My first trip to Spain lasted for six months. There was so much going on there- so much to learn that I had to go back for another six months. I cooked in France for a while and everyone was talking about the food scene in Spain. That is why I went, and every time I return there is something new going on, always something to learn. I know I will never stop learning there. And even though I have more experience with French cooking, I feel like I can do Spanish food just as well. A lot of French and Spanish techniques are the same, and I love cooking both cuisines, but Spanish I can learn the most from.

Since you changed this space from Ureña to Pamplona, you’re getting re-reviewed by the press in New York. You already got a good review from the New York Observer, but as in Frank Bruni’s 2 star review of Ureña, there’s a line in the Observer review about the harsh lighting in here. What’s up with your fixtures?
You know, with design it’s kind of hard to please everyone. Everybody has an opinion about how a restaurant should look. If you start listening to all that then it ceases to become your own place. I’d rather just concentrate on the food. If Frank Bruni doesn’t want to come in because the light fixtures aren’t up to his standards, then I could care less about that. I care so much more that people come here and try my food, and listen to what people say about that. It’s just more about having a great meal at a good price for me right now.

Are you happy that the health department loosened its restrictions on sous vide cooking, a technique you’ve been known to favor?
They changed a lot. Now restaurants have to have a license, and there are a lot of laws. I think it’s way too tough in the United States. If you look at Spain, Italy, and France, they don’t have laws like that, and they’ve been cooking food sous vide for a much longer time. Nobody gets sick. There are, of course, standard rules to follow when cooking sous vide, but I think the laws here are a little too extreme.

What advice do you have for young cooks?
You have to be yourself and know what your interests are. If you want to be a good chef, it’s going to take a lot of hard work. In some sense, though, you need to not listen to anybody but yourself, and do what makes you happy.

What’s your favorite subway line?
I don’t have one. They’re all the same. I guess the 6 is faster than the other ones, though.

What’s your idea of a perfect day off in NY?
I work six days, so I would like to sleep a little bit, maybe until 10 o’clock. Maybe then I’d like to have some breakfast, and read a couple of pages in a cookbook. It doesn’t matter which one, most cookbooks have at least some good ideas. Then maybe I’d like to go to the park for some fresh air, and to lay down somewhere for a while. After that, I’d like to have some dinner with my family.

Do you have a favorite place in the city to get an after-hours inexpensive meal?
Blue Ribbon is the best.

Do you have a strange, only in New York story to share?
Honestly, no. I’ve been at work the whole time. And if I had to compare the lifestyle in New York to that in the Dominican Republic, I’d have to say no.