A few years ago Macy's delighted many New Yorkers by relocating their massive 4th of July fireworks from the Hudson to the East River, finally... but their latest move may prove a little less popular. The 41st Annual Macy’s 4th of July Fireworks—which Macy's claims will be the "largest display in more than a decade"—the company will consolidate all of its East River fireworks barges near Midtown Manhattan. In previous years, there was at least one fireworks barge positioned further south, for people in the Lower Manhattan and Brooklyn Bridge area.

The company has provided a map of the new barge locations and best viewing areas: 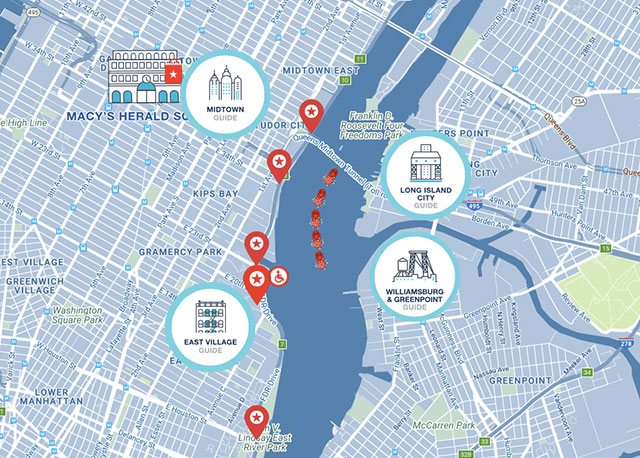 Their five barges will be located in the East River between 24th and 41st streets, and amNewYork reports that the decision has businesses in Brooklyn Heights, DUMBO, Battery Park and the South Street Seaport worried about losing the extra revenue they were counting on. "The change in barge locations came as a last-minute surprise" to some bars and restaurants, and some had already sold tickets for special fireworks viewing events, which they now need to refund.

A Macy's spokesperson (per the Brooklyn Eagle) said the location change was due to a number of factors, including the "size/scale of the pyrotechnics used, safety requirements, accessible public viewing locations and available city resources."

Brooklyn Bridge Park, a prime viewing area in recent years, posted a warning on their website, noting "the fireworks will not be visible" from the location this year. Macy's also stated that the park "is not a suggested location to watch the display" this year "due to its obstructed views."

#fireworks
#fourth of july
#macy's
#map
#midtown
Do you know the scoop? Comment below or Send us a Tip