All summer, Gothamist has been entrenched on the front lines of the Beyonce/Jay Z Divorce Rumors Wars. There have been accusations of Rihanna-induced infidelity, escape plans, mysterious birth cults, all sorts of "Jedi mind tricks," and of course, Tom Ford Voodoo Chants. But we were so focused on what might happen externally that we missed what was happening internally. Strap on your tin foil hats Beylievers, because Beyonce is 100% for sure definitely without a doubt pregnant*.

While performing together in Paris on Friday evening, Jay Z changed the lyrics in his song "Beach Is Better" from "I replace it with another one" to "pregnant with another one." Did you read that? Did you see the word "pregnant"? That is not a coincidence. That was not just some 'ad lib.' This is not a drill. Shit just got real.

I can feel your skepticism burning a hole through this webpage. "So what if Jay Z changed one line in one song during one concert appearance in a city best known for being the place where Jay Z and Beyonce once ate lunch with Blue Ivy?" I feel you. But the evidence is just too overwhelming. Radar reports that an insider told OK Magazine this:

“For the last month, Jay has been fiercely protective of her, just like he was when she was expecting Blue Ivy,” a source told the magazine. “He’s been doing everything he can to ensure that Bey is in a stress-free bubble. He’s informed their entire entourage that they need to use relaxed voices, mellow lighting and listen to only soft music, and he’s said that all of the food Beyoncé eats should be organic. He’s really doing his best to make sure that she’s as comfortable and healthy as possible.”

Still don't believe? What about this: "We love Paris. It's special to us because we got engaged here and this is where baby Blue was conceived," an "emotional" Jay Z said, according to the Associated Press. The only possible reason Jay Z would mention this is to give confirmation to the followers of the one-world authoritarian government known as the New World Order that there will be an Abel to Blue Ivy's Cain, one who will probably be named Red Vestibule or maybe Green Body Of Water.

And look what the Daily Mail dug up: irrefutable proof. 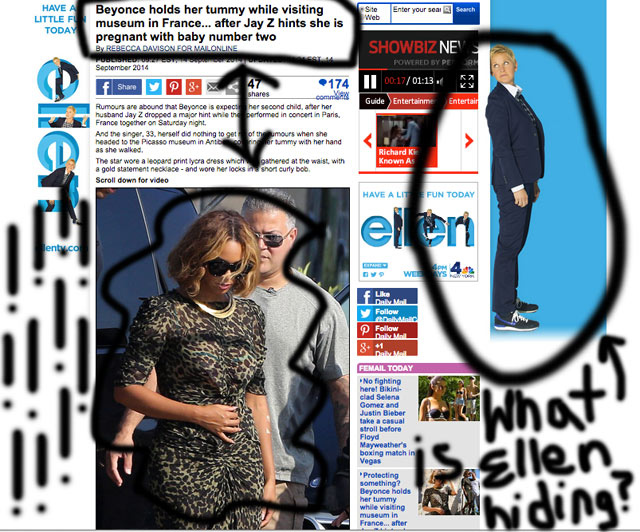 The proof is in the pudding. Wait, are pictures pudding?

Do you still doubt that Beyonce is pregnant for the first time**? Ask yourself this: what kinds of people have babies? Easy: teenagers, ghost lovers, and very occasionally, corporeal adults who are in love. Sure, neither Beyonce nor Jay Z are technically teenagers or ghosts***, but guess what? They are in love. They are so in love. All those divorce rumors were just a smokescreen for their fiery passion. Check out the exchange below (via People) from Saturday night's show in Paris, and tell us you still doubt Beyonce is pregnant.

"I'm your biggest fan," [Beyonce] said, teary-eyed, as she gazed at her husband.

"It's been an honor and a pleasure to share the stage with you. I couldn't dream for anything else [than] to be in this stadium with the woman I love, who I believe is the greatest entertainer of our time," Jay Z said. ... "I love her. She's my wife."

Point: the exact moment when Red Vestibule was conceived.

Counterpoint: this has all happened before, and it will happen again.

Two months ago, sites said Jay Z and Beyonce were breaking up because she changed lyrics in concert. We've learned nothing.

Point: look at Blue Ivy's face, she knows some shit is about to go down.

Counterpoint: would Beyonce drink champagne if she were pregnant? I think not.

This pic of Beyoncé & Beyoncé's husband w champagne after their last show could be her way of sayin she aint pregnant pic.twitter.com/5uRfqwiTzd

Counter-counterpoint: that liquid could be anything. It could be paint thinner. It could be organic vegan kale grape soda juice. For all we know, it probably is.

Take your heads out of the sand, people.

Hey, everybody needs a hobby.

Thinking of starting my own Beyonce cult pic.twitter.com/uH9jCp8qD6

*Or not, who knows.
**Like Superman, Blue Ivy was created to give the people of Earth an ideal to strive towards. But ideals cannot be born from any human vessel. They can only be divinely summoned via Tom Ford Voodoo Chants.
***As far as we know

#beyoncé
#conspiracies
#divorce
#illuminati
#jay-z
#pregnant
#red vestibule
#rumors
#original
Do you know the scoop? Comment below or Send us a Tip