The incomparable Chilean filmmaker Alejandro Jodorowsky premiered his first film in 20 years, The Dance of Reality, at The Museum of Modern Art on Friday night to a packed and adoring audience. The director was on hand to present the film and stuck around afterwards for an insightful and lighthearted conversation with Chief Curator at Large Klaus Biesenbach. Two decades between films might seem like a long time to you, mortal, but for Jodorowsky, not so much: "I don't live in time," he said casually. "Time doesn't exist for me."

Jodorowsky is enjoying a bit of a moment right now, with the impending wide release on March 21st of Jodorowsky's Dune, a documentary chronicling the filmmaker's attempt to adapt the Frank Herbert's science fiction masterpiece Dune. It has always been at the top of the heap in terms of the greatest unmade movies, and the documentary only furthers the legend.

In two years of pre-production, he enlisted the help of H.R. Giger (the guy who made the alien from Alien), Pink Floyd, David Carradine, Mick Jagger, Orson Welles, and Salvador Dalí, digging himself a $2 million dollar hole without filming a thing and finally scaring away any future financiers. It's not like he was twiddling his thumbs and lighting money on fire, though—the entire film was almost fully conceptualized, from the art direction to the storyboards, sketches, and dialogue.

It's possible that The Dance of Reality would not exist without Jodorowsky's Dune, as the documentary reunited Jodorowsky with Michel Seydoux, the principal investor of the failed film, who gave Jodorowsky $1 million dollars to make his latest work. “It was a necessity to him to do it,” Seydoux told the New York Times. “It was something in his heart, so I said, yes, without any information, any script, any paper, nothing. . . . To help him to repair, to give him another chance...even if you are 84, you must have a second chance.”

The Dance of Reality [SPOILERS AHEAD] is the autobiographical, if largely fantastical, story of Jodorowsky's admittedly rough childhood in Tocapilla, Chile living under an unforgiving mother, Sara, and his pathological father Jaime (played by Jodorowsky's son, Brontis), a Stalin-worshiping Communist with violent dreams of assassinating the country's dictatorial president Carlos Ibáñez del Campo. The film mostly centers around Jaime and follows him on his quest to kill Ibáñez, becoming the caretaker for the dictator's beloved horse to get closer to the man. His hands fail him at the opportune moment and remain paralyzed, and Jaime struggles to heal himself and make his way home.

Jodorowsky appears on screen at the beginning and reemerges throughout, narrating the action and interacting solely with his childhood self. It's a bold and unmistakeably Jodorowsky-ian trope—simultaneously breaking down the limits of film while elevating their possibilities—toying with reality all the while. His real mother wanted to be an opera singer, so in the film she only sings, always backed by a beautiful score from one of another of Jodorowsky's children, Adan.

There isn't much to say about the movie that would surprise Jodorowsky fans. How you receive it will rely on how you receive Jodorowsky himself. Critics could call it indulgent and inconsistent. But I'd say it's a joy to watch; equal parts funny, tragic, surreal, and beautiful, and one of his most immediately accessible works. Perhaps the pleasure lies from the insight it offers into one of the most uniquely interesting minds to have graced our planet: in his native language of film, Jodorowsky gives us access to life as he knew it, whether that has any bearing on the historical record of his childhood doesn't really matter. 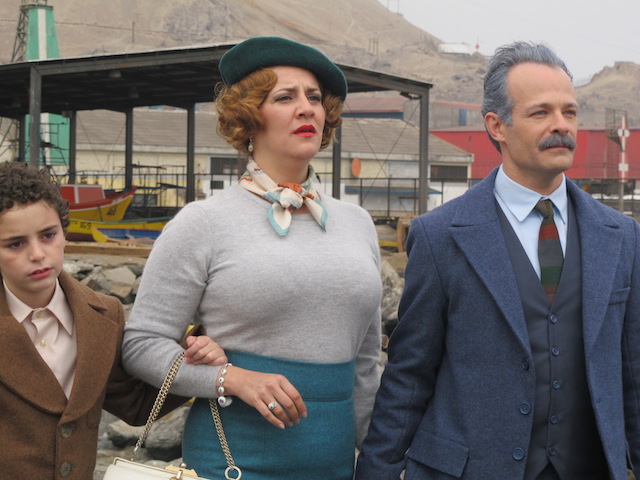 The Dance of Reality, courtesy ABKCO.

Jodorowsky has always made his work a family affair, and The Dance of Reality was no exception. When Biesenbach asked him about that, he said, "I do not want to work with the stars because they are so difficult." As for the significance of his son playing his father, he said simply, with emphasis, "My son is playing my father." He spoke lovingly about his current wife, Pascale Montandon (who designed the film's costumes), Adan's irreplaceable score and Brontis's deft performance. His whole family was more or less involved at various stages. "Family lawyers make lawyers...businessmen make businessmen...[and] artists make artists," Jodorowsky opined.

Heavily spiritual (like Jodorowsky himself) the film dealt both with his future and his past; he contends with his own mortality by exorcising the complicated memories of his parents. "Why art?," he asked rhetorically. "What is the point? Am I making a movie to forget for two hours? [Or] Am I making a picture to remember myself, my values, my humanity?"

Jodorowsky's Dune opens in theaters on March 21st, and The Dance of Reality will be released on May 23rd.