Over the weekend Alec Baldwin, who turns 54 years old today, proposed to his girlfriend, 28-year-old yoga instructing Hilaria Thomas, while the two were away in Montauk. How do we all know this? Because Alec Baldwin is very famous! So naturally, this important life moment that would normally be kept amongst friends and family for the rest of us, was splashed about in the newspapers. It comes with the territory of being famous, and the two likely weren't going to keep it a secret anyway, as they've documented their love for each other in many public Tweets. But Baldwin went off on Twitter last night after one newspaper, The Daily News, sent photographers to his fiance's yoga class to get photos of the ring.

The paper scored some blurry shots, and wrote, "Thomas was photographed Monday in Manhattan sporting a square-cut diamond engagement ring on her left hand," it was described as "huge, very clear, perfect clarity, Cartier."

The yoga intruders were called out as being Simone Weichselbaum and Enid Alvarez—the former is on the paper's crime beat, and Baldwin noted in one Tweet, "If you're looking for an experienced crime reporter to crash a yoga class, contact @SimoneWei." Here's what else he had to say: 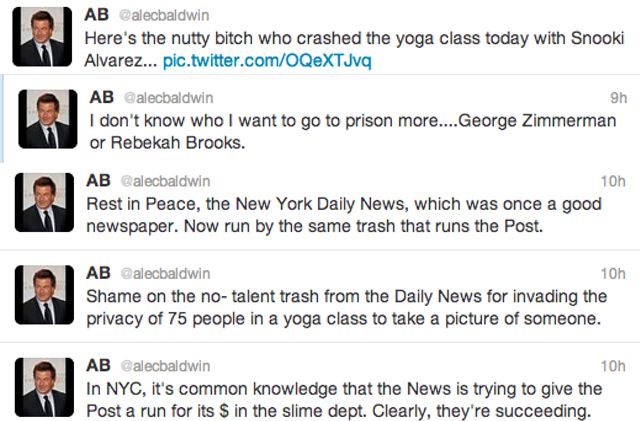 Probably not the best idea to drag Zimmerman into this (war on newspapers), but otherwise, it was probably one of Baldwin's more appropriate Twitter rants. At the very least, think of all the yoga students—no one wants cameras around when they're trying to perfect their plow pose.

We've reached out to Weichselbaum to see if she has any comment about this.

#alec baldwin
#engagement
#hilaria thomas
#the daily news
#twitter
Do you know the scoop? Comment below or Send us a Tip