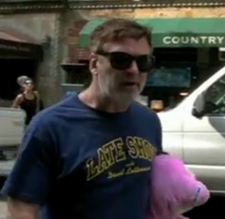 Everyone's favorite text-happy, paparazzo-hating actor Alec Baldwin allegedly manhandled a photographer camped outside his East Village home this morning. The NY Post and TMZ were both thankfully on hand to witness the alleged altercation and make sweet yoga jokes about it. You can see video of the altercation at TMZ—during it, Baldwin yells at the photographer, allegedly squeezes his arm, and tells him to leave. And he did all this while clutching a pink teddy bear under his arm.

You can hear Baldwin telling photographer Brian Prahl, "I want you to shut the f--k up...leave my neighbor alone...get outta here." INF, who got photos of the altercation, claim that Baldwin became angry after finding a parking ticket on his car, and took it out on Prahl.

Baldwin is still being investigated over an alleged "punching" incident with a Daily News photographer 10 days ago, and is set to be married to fiancée Hilaria Thomas tomorrow (party 411 2 B texted lol). He tweeted yesterday about his frustration with photographers constantly hanging around his building:

"Reporters" are stalking outside my house, and following in their car. Only to harass and disturb.If only a meteor would hit that car...

The biggest outrage from this altercation? They were blocking a bike lane.

#alec baldwin
#altercation
#photographer
#pink teddy bear
Do you know the scoop? Comment below or Send us a Tip