After the original Alamo Drafthouse in Austin announced women-only screenings of the upcoming Wonder Woman movie, the downtown Brooklyn location added its own women-only* screenings, with all the proceeds going to Planned Parenthood. The Brooklyn screenings are Sunday, June 4th at 3 p.m. and Monday, June 5th at 7:45 p.m.—and tickets are selling out!

Update: Those two screenings have sold out, but now there's a third one for Thursday, June 8 at 7:30 p.m.

*Attendees also include those who identify as women:

@PPFA Want to clarify these WONDER WOMAN screenings include any of our guests who identify as women as well.

The most iconic superheroine in comic book history finally has her own movie, and what better way to celebrate than with an all-female screening?

Apologies, gentlemen, but we’re embracing our girl power and saying “No Guys Allowed” for several special shows at the Alamo Downtown Brooklyn. And when we say “Women (and People Who Identify As Women) Only,” we mean it.

So lasso your geeky girlfriends together and grab your tickets to this celebration of one of the most enduring and inspiring characters ever created.

Currently, there are only two screenings planned for Brooklyn.

Of course, not everyone is thrilled about this special treatment for the highly-anticipated summer blockbuster, starring Gal Gadot, Chris Pine and Connie Nielsen and directed by Patty Jenkins.

my new favorite thing: Alamo Drafthouse's responses to men being Mad Online about a women-only screening of WONDER WOMAN pic.twitter.com/H8jGiYrpOO 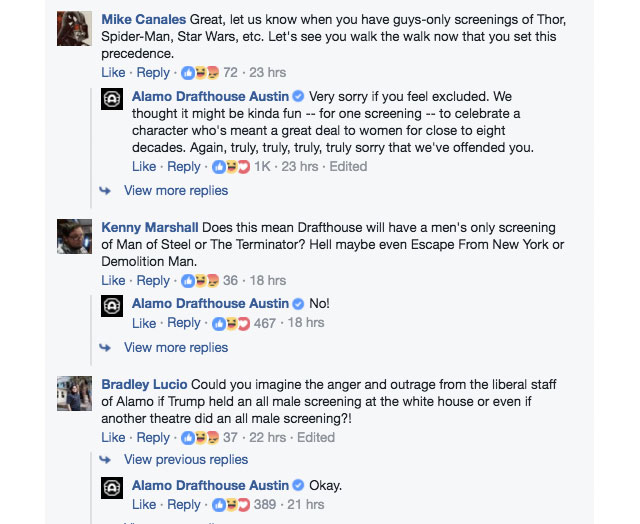 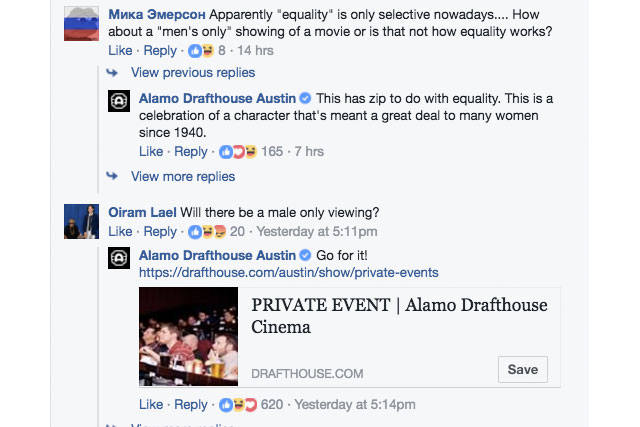 Shout out to all the new legal experts in our Twitter feed! pic.twitter.com/z5xlPofhrf

No matter what your gender, you can watch the final trailer below:

Update, May 30: Alamo Drafthouse issued a statement today, "Obviously, Alamo Drafthouse recognizes 'Wonder Woman' is a film for all audiences, but our special women-only screenings may have created confusion - we want everybody to see this film."