When the riveting ensemble film Glengarry Glen Ross, based on David Mamet's 1984 Pultizer-prize play of the same name, was released in 1992, it was no smash Blockbuster success. But it quickly attained cult status among connoisseurs of fine acting, earning a slot in Empire magazine's list of the 500 Greatest Movies of All Time. The boffo cast includes Kevin Spacey, Alec Baldwin, Jonathan Pryce, and, of course, Al Pacino, who won a Golden Globe for his biting portrayal of ruthless real estate salesman Ricky Roma. This November, the corruption of 1980s real estate, and those desperate slobs who sell it, will once again appear on Broadway, this time under the direction of Daniel Sullivan.

Those casting rumors can now be finally laid to rest — Al Pacino's starring role is confirmed, this time as Ricky Roma's considerably less brutal sales associate, Shelley Levene (played to perfection by Jack Lemmon in the 1984 movie version). The dynamic new cast will also feature Bobby Cannavale as Ricky Roma, David Harbour as John Williamson and John C. McGinley as Dave Moss. At yesterday's press conference, a recurring theme seemed to be whether the castmembers were at all starstruck working with Pacino.

"Getting to know him in Merchant of Venice, there was a lot of intimidation, initially," said Harbour. "And now I just know him as a guy who really loves acting. More than anyone I know, he has this sort of childlike joy around creating characters." Pacino, for whom stage acting is "a form of therapy," remarked on what goes through his mind he is referred to as an "icon": "Absolutely nothing. Maybe I'm lucky; I just don't take it seriously. I think it's fine—I mean, why not? Somebody's gotta be." 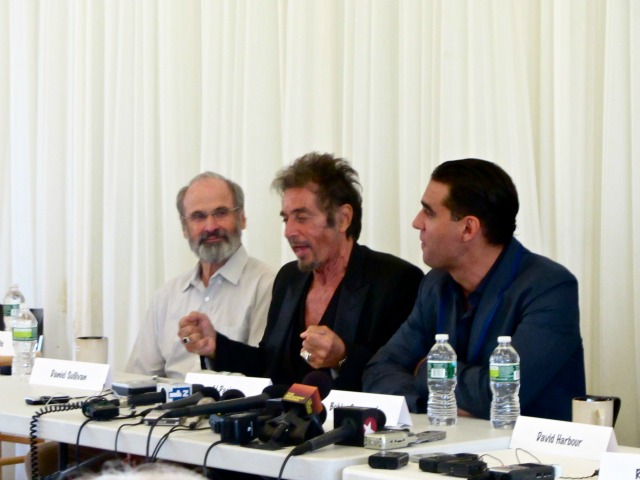 Despite the myriad films he's acted in, Pacino is frequently drawn to his roots off the screen. "It’s a joy to be on any stage, but Broadway in particular. It’s my home, it’s where I started, it’s where I had my debut, where my life changed…Being seen on stage, I got to the attention of certain filmmakers. Then it was [notoriety from] the films, in turn, that enabled me to go back to Broadway and be in a Broadway play."

All of the actors showed reverence for Mamet's work, commenting on the play's thematic significance within a larger cultural context, and also the musicality of its dialogue. "Everybody knows that it’s a great play," said Cannavale. "And it’s kind of a perfect play. There’s not a spare word; it's very economical. [Mamet] gets across exactly what he’s trying to get across; a feeling, and a mood." Which is pretty remarkable for a script whose movie version apparently includes the word "fuck" and its derivatives a total of 138 times.