Air Guitar Gets Bloody in Brooklyn 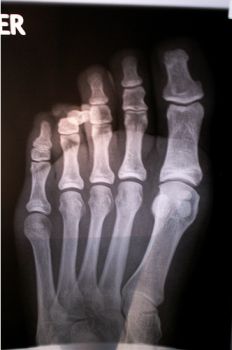 Taryn Kapronica, stage name Bettie B. Goode, may be the sickest air guitarist in the region, but the Brooklynite's title has come with a hefty price: her toe. The Daily News says the winner rocked her U.S. Air Guitar Championships Brooklyn Regional performance at the Music Hall of Williamsburg so hard that her toe bent backwards and was later amputated! She told the paper that: "By the time I hit the ground and looked down, my toe was pretty much gone and just hanging from a thread." Blood dripping across the stage, she continued to play finish her air cover of Scorpion's "Rock You Like a Hurricane," saying "I just kept on air guitaring". The U.S. Air Guitar blog has an account of the incident, which took place on July 9th:

Then, it happened. Bettie B. Goode started her routine by jumping off the stairs you take to get from backstage to on-stage. She promptly ran up to the balcony, climbed over the railing, onto the plexi-glass awning above the soundbooth that is, presumably, there to prevent drinks from the balcony falling on the sound equipment – that is to say, not meant to support the weight of a full-grown human being, no matter how slight or dainty her build. Bettie then ran over to the judge’s table where we all got a good look at her toe, which by then, was broken in half, bleeding, with white bone showing. She beat out the two technically superior contestants, but I mean... Bone was showing. She was declared the winner and promptly whisked away to the emergency room. Which just goes to show... In Air Guitar, sometimes when you win, you actually... are insane.

#air guitar
#amputation
#Bettie B. Goode
#brooklyn
#regionals
#Taryn Kapronica
#toe
#U.S. Air Guitar
Do you know the scoop? Comment below or Send us a Tip