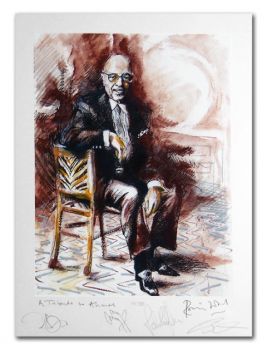 Atlantic Records founder Ahmet Ertegun, who died from injuries sustained during a fall at the Beacon Theater Rolling Stones concert in 2006, will be represented at the Christie's Pop Culture/Punk Rock auction today via a portrait.

Created by Rolling Stones guitarist Ronnie Wood, the limited edition print is signed by all three surviving members of Led Zeppelin, along with drummer Jason Bonham (son of original drummer John Bonham) and Wood. The piece commemorates the band's reunion concert last December, where they reformed especially to pay tribute to Ertegun (they spent their entire recording career with Atlantic).

Wood created the drawing, "A Tribute To Ahmet," as a limited edition of 100 prints (which sold for $10K each at the reunion concert). Out of the original edition of 100, only 8 were signed by all members of Led Zeppelin and have been unavailable until now. All proceeds will go towards the Ahmet Ertegun Education Fund. But will the rock n' roll set show up in force to save the suffering auction house?

#Ahmet Ertegun
#auction
#christie's
#Ronnie Wood
Do you know the scoop? Comment below or Send us a Tip