After ReBar Owner Ruined Their Wedding, One Couple Found A Happy Ending

"I've never hugged so many people in one day," says Jen Liseo of her wedding. "It doesn't feel different in the way we lead our lives, but there's definitely something powerful in proclaiming your love and commitment for one another amongst family and friends."

She's sitting on a cushion in the comfortable Park Slope apartment she shares with her partner of 15 years, Nancy Nienberg, and their three cats, who all came from the same litter. Shelves are littered with keepsakes from their life together, including the hot pink 3-D-printed topper from their wedding cake. It shows Jen and Nancy facing one another, their hands clasped together above their heads. Outside it's raining heavily and the sidewalks clear of anyone, but in their apartment it's bright and warm and there's a shared life here, one that was briefly upset by the reBar scandal and Jason Stevens, the former owner of the popular DUMBO restaurant and events space that closed suddenly in early May.

"I know he was in the community for a long time, I know he did a lot of good," Nancy says as Jen looks on from her position on the living room floor. "I think he got caught up in the circumstances and he made very bad choices."

The couple were supposed to have their reception at reBar on a Friday afternoon in the fall, along with 200 of their friends and family, many of whom had never met each other in the 15 years since Nancy and Jen's lives first intertwined in a West Village bar. According to the two, getting married (after years of legally not being able to) was "an excuse to bring everyone together and have an awesome party."

"I had a meeting in the city and I went back to my office and one of my office mates said, ‘Did you hear what happened?'" Nancy continues. "She had no idea that I had scheduled my wedding there. She was literally just telling me this as neighborhood news." She called Jen and asked her to come meet at her office in DUMBO.

"My stomach dropped," says Jen, who, at the moment, is waiting for their wedding video to load, admitting that she's watched it "a million times already." "I'm [thinking], ‘What happened? Somebody died.' Luckily, it wasn't that." 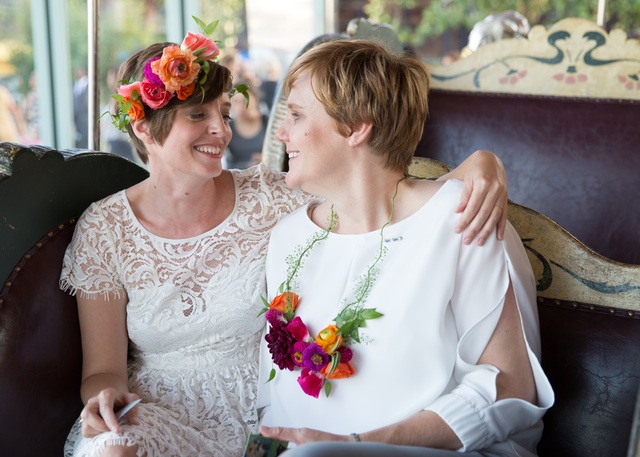 "powerHouse [Arena bookstore] was one of the first venues I looked into and it was really expensive," she adds, running through the list of other raw spaces the couple considered first. "Jason sold us on the whole reBar package because there were so many things included that we didn't have to think about and we could focus on the little details that we cared about."

When Jen and Nancy met with Stevens in April, he offered them a significant discount if they paid for everything upfront, so the pair put down what they describe as the "second biggest check of our lives." Stevens cashed it almost immediately, assuring them that everything would be ready when their wedding day came. Less than a month later reBar abruptly closed.

"Then, it was just spinning after that," says Jen.

As the story unfolded over the next few days, the full extent of Stevens' misdeeds dominated local ("Marriage and weddings is a language that a lot of people speak," says Jen). Former employees revealed that in the weeks and months leading up to reBar's closure, Stevens had started firing people left and right for seemingly petty reasons. Others would claim they hadn't been paid for more than two weeks before that point. And a few would mention that there had been whisperings of possible trouble for nearly a year, but there was no solid knowledge of Steven's financial situation. Jen and Nancy never got wind of any of the venue's money problems. 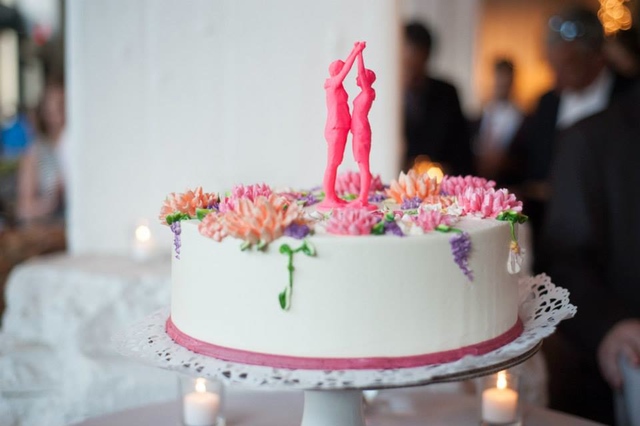 But as the rainy afternoon melted into the evening, all she could think about was the timing of everything, how the couple had given Stevens a sizable check only to have the venue close less than a month later. Together in Nancy's office, the two went over those tiny, seemingly important details, contacting a lawyer friend who suggested that the timing of everything—Stevens cashing the check with full knowledge that reBar was going under—could definitely be the crux of their case against him.

"It was clearly fraudulent," says Nancy. Jen, whose energy tends to fill the room, leans forward and blows an exasperated raspberry in response.

Less than a week later, Jason Stevens turned himself into the Brooklyn D.A.'s office. He was formally charged with grand larceny and four counts of tax evasion for withholding more than $1 million from the IRS between June 2009 and December 2012. When Stevens finally appeared in court, Jen, Nancy and a handful of affected couples attended some of his hearings, organizing protests against him through a private group called "Screwed by ReBar" that another couple started on Facebook. Some of the more inflamed couples (though not Jen and Nancy) were there when Stevens, wearing an ill-fitting black shirt and thin-framed glasses, was sentenced to three-to-10 years in prison and subsequently banned from the restaurant industry. The 41-year-old was moved upstate in late July. Meanwhile, some couples attempted to file official complaints with the Brooklyn D.A.'s office only to be turned away and pointed in the direction of the New York Attorney General.

"I learned a bit more about our legal system," says Jen. " And [it] really disappointed me. In the end, the District Attorney didn't stick up for us."

"They said, it's not a criminal matter, it's a civil matter," Nancy adds.

[A spokesperson for the Brooklyn D.A.'s office told us that a "civil action" was deemed "the more appropriate forum," thus the case was referred to the the AG’s office, "The actions of rebar and its owner, Jason Stevens, did not rise to a criminal level or fall within the criminal statutes. Where we could charge him, we did, as you will see from the press releases announcing his guilty plea in June [pdf] and his sentencing in July [PDF]."]

According to an official at the New York State Attorney General's office, which handled the civil side of the case, a default judgment will be finalized and leveled against Stevens this month on behalf of 107 individuals who are owed $1,427,628. Still, it's unlikely that Nancy, Jen or any of the other couples will see a dime. At least not any time soon.

"What we understand is the IRS is ahead of everybody in terms of payment," says Nancy. "We sort of assume none of [the judgements] are going to amount to anything—but Jen has a really beautiful thought on it."

"I'm just hoping down the line when we really, really need that vacation—we'll get a phone call," Jen says, laughing. 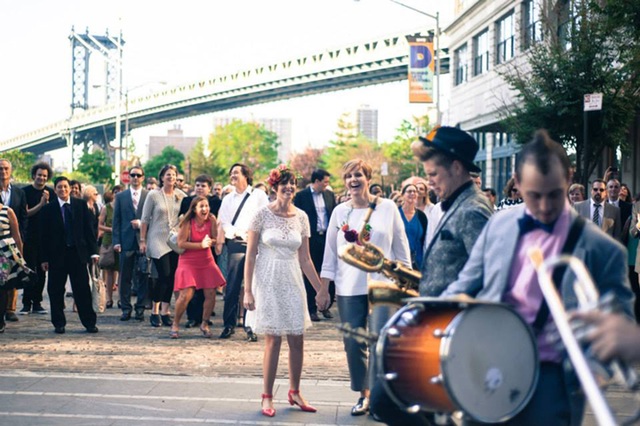 Until that day, the couple isn't holding their breath or even dwelling on the situation. Yes, they paid for their wedding twice over ("Get wedding insurance!" says Jen), but the wedding they got—invitations Nancy drew and Jen designed and fresh bouquets handmade by their next-door neighbor and close family friend—was that much better.

Leading up to their wedding day, dozens of local businesses reached out to Jen, Nancy and the other couples, offering discounted venues, DJs, catering, the works. Meanwhile, friends and family stepped up to help the couple sort out alcohol, photography and other to-do's.

And after months of rapid fire planning, on their original wedding date of September 12, Jen and Nancy tied the knot at City Hall. The couple walked across the Brooklyn Bridge with family and friends, led by an accordion player and, at one point, a group of Hare Krishna devotees, arriving in DUMBO where their 200 wedding guests met them and walked in a street parade led by a brass band Jen paid for in part with her photography skills. Everyone rode Jane's Carousel in Brooklyn Bridge Park before the entire wedding party walked to powerHouse Arena (rented to the couple at a significant, wedding day-saving discount) where Jen and Nancy exchanged vows. At the party after the ceremony, the couple and their guests danced to the point of exhaustion to a playlist of their favorite songs that were sent along with RSVPs.

"Lotta drinking, lotta dancing," says Nancy, as their wedding video plays for the millionth and one time (watch here).

And at the end of their party, a friend offered up her mother's cottage in Long Island's Sag Harbor for their honeymoon. Jen and Nancy spent four blissfully quiet days hanging out on the beach and exploring the East Hampton town.

"It was beautiful," Jen says, smiling brightly. "It's a happy ending."

In the months since they became legally wed, Nancy and Jen have kept in contact with the other couples, passing around votive candles, decorative birdcages and other wedding accents between them, with Jen even photographing another couple's wedding pro bono. And the overwhelming conclusion she and Nancy have come to is that everyone escaped the victimizing shadow of being so-called "reBar couples."

"It seems like everybody had an amazing wedding," says Jen over the insistent, post-dinner mewls of their cats in the next room over. "There's something in that whole replanning process that probably brought out something extra special. Everybody figured it out."

Nikita Richardson is an editorial assistant at Fast Company Magazine and freelance writer. Check out her work at www.nikitalrichardson.com.

Jen Liseo and Nancy Nienberg would like to thank the following individuals and businesses for making their wedding day such a the beautiful occasion:

#brooklyn
#dumbo
#jason stevens
#rebar
#wedding
#original
Do you know the scoop? Comment below or Send us a Tip