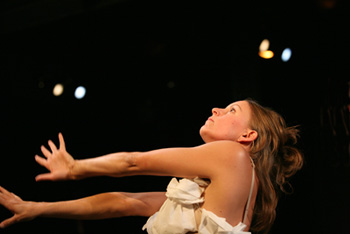 As one half of “New York’s bravest and bawdiest” somersaulting, trapeze-swinging, burlesque duo The Wau Wau Sisters, Adrienne Truscott has wreaked her fair share of mayhem around the world. As a choreographer, she’s slightly more tethered, but still terrifically entertaining. In her latest work genesis, no! Truscott explores the concept of the museum, and wonders why we as a society preserve the things we do. In anticipation of a four-night run at Dance Theater Workshop (which started last night), Truscott spoke to us about her toilet paper bikini, dancing to David Byrne, and performing among pyrotechnics in Australia.

You use an image of five wild horses in genesis, no! My 95-year-old great-grandmother has this picture hanging over her couch. Where did you get it? And what is its significance in the piece? That’s where i got it, at your grandmother's house! No, I found it in the street and liked it. There are five of us in the piece, three central performers and two peripheral characters. Also, for this piece, we were thinking a lot about museums and art and artifacts, and wondering who is in charge of curating art, or history, or all that stuff, in the larger sense, and also what we choose to keep and what we choose to throw away, what’s gone forever, and that sort of thing. And they are just these five wild horses in the trash. I liked something about that. Also, I am a world-class trash picker.

You have a knack for creating fanciful characters. Tell me about some of the characters in genesis, no! Every one is sort of a composite. I really like the audience to make it's own sense out of the piece, and we tried to make a piece with lots of different stories and layers. There is a primitive man character, a sort of patron-of-the-arts/ghost of Gloria Vanderbilt type, and an under-evolved Patagonia guy.

Do you wear a toilet paper bikini? Of course.

Many of your works are steeped in aspects of American culture. Genesis, no! Explores the idea of museums, your previous piece, they will use the highways includes aspects of the New Jersey turnpike. How do you know if a concept is strong enough to build a work around? If it feels abstract enough to cohere with my thoughts and interest me. Also if I feel like I really like the idea but I fear it might fail, then something is right. Hopefully.

You were awarded the "Miss Exotic World 2005" title. What's that all about? Oh no! The Wau Wau Sisters, which is my dear sister Tanya Gagne and myself, won best troupe at an incredible ranch for retired strippers, in a barren desert between Los Angeles and Las Vegas. It was incredible!

Why did you and Tanya Gagne decide to form your neo-vaudevillian duo the Wau Wau sisters? To mix everything we like to do however we wanted and create a bit of a one-of-a-kind thing that was fun for us and the audience. We've been doing it for almost 8 years!

Wau Wau Sisters acts, with their scintillating costumes, characters, and acrobatics, are known to get a bit risqué. Have you ever had any problems with amorous fans? No. Some weird ones, but we're not the type of gals that you really feel like you could fuck with. I think our fans know we're in charge of what we're doing, and during the show, what you're doing!

You guys were featured on lots of different TV shows. What was the most exciting television appearance you made? It was a show in Australia called Sideshow. They asked us to do one trapeze act, and we did the whole show, and we had pyrotechnics during the whole act.

Who is your favorite performer of all time? Can't answer that, although Neal Medlyn is right up at the top and he's in my work, so that is a real honor.

When did you know you wanted to be a performer? Always, but I used to be sort of shy and only do things for the family and the neighborhood.

Where are your favorite places in New York to perform? DTW! Ps122! The Zipper Factory!!

Where are your favorite places to see a performance? The same places, or some unexpected corner, subway car - you know, the kind of things you see less and less of in New York even though it's part of why you moved here in the first place!

What was the best performance you saw in the past year? I saw Macbeth at BAM. I also so Kenny Melman and Bridget Everett do an amazing show called Sexercise at Joe’s Pub.

What are your top songs to dance to? Golly. Once I saw David Byrne cover Whitney Houston's “I Wanna Dance With Somebody,” and I thought I could dance all night to just that song, as long as he was there in his small blue suit.

#Adrienne Truscott
#Dance Theater Workshop
#interview
#The Wau Wau Sisters
Do you know the scoop? Send us a Tip