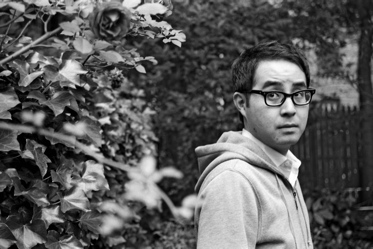 An author of the comic book series Optic Nerve, graphic novels like Summer Blonde and a frequent illustrator for New Yorker, Esquire and Rolling Stone, Adrian Tomine draws beautiful pictures about bad relationships—banalities, messiness, thrilling encounters and accidental connections. His new graphic novel Shortcomings follows Berkeley movie theater manager Ben Tanaka and the final days of his flawed relationship to Miko, who is considering a move to our fair city for a job. Cranky Ben doesn't understand why "everyone in Berkeley [has] a total hard-on for New York" but Tomine does; he now resides in Brooklyn. Gothamist recently chatted with the busy author (and newlywed) over email about Asian American artists, eavesdropping and peanut allergies. By the way, Drawn and Quarterly will be celebrating the release of Shortcomings on Wednesday at BookCourt in Brooklyn with a signing and Q&A at 7 pm with Nicole Rudick of Bookforum.

You’ve written many shorter format stories for years in your Optic Nerve books published by Drawn and Quarterly; what led you to want to create this full length graphic novel?
This is probably an appropriate analogy with respect to this particular book: I was envious of the length of my fellow cartoonists’ narratives. I can remember reading things like Jimmy Corrigan or Louis Riel, for example, and just feeling like, “I’ve gotta push myself to at least try something more ambitious than these little short stories I’ve been cranking out.” And I think that’s the way a lot of people make progress: they aim for like, a 10 on the scale of progress, and they probably end up falling way short of that, but it’s still better than nothing.

Often you work deals with the evolving identities of young people, particularly here in Shortcomings with being Asian American or a lesbian, yet without the book being solely about race or gender. Do you ever feel pressure to write stories from a particular, maybe disenfranchised, point of view or do your themes just evolve more organically than that?
If anything, I feel a bit of pressure to write about less disenfranchised people, because I’d probably sell more books that way, and would’ve already had some hot property that I could’ve sold to Hollywood. But for better or for worse, I don’t really think about these kinds of things when I’m writing my stories, and any identifiable “point of view” or themes in the work just spring from my own personality and experience. I think another factor is just that the process of creating a comic on one’s own is such a slow, time-consuming and labor-intensive process, that I think creators are often guided towards stories or characters that typically wouldn’t be seen in more mainstream media. Like, what’s the point in toiling away for five years on something that’s exactly like a network TV sitcom?

Has writing about these characters with so many relationship problems helped you or hindered you in terms of dealing with your own relationships?
You should ask my ex-girlfriends that question. Actually, don’t. I think that, like pretty much everything connected to a relationship, there’s no simple answer. On a very basic, concrete level, there have been times when my work, regardless of the content, has harmed relationships because I made that work such a primary priority in my life. On the other hand, I feel like the nature of some of my stories has forced me to really scrutinize relationships to an unusual degree, and part of that process involves looking at problems or conflicts from various points of view. And while that doesn’t always improve my personal life immediately, I would hope that there’s some cumulative knowledge or insight that comes from that. But as far as the stories themselves actually affecting my personal life, I haven’t had to deal with that very much. 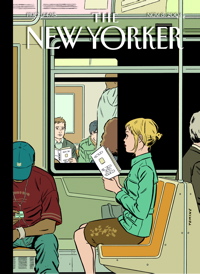 Totally geeky admission here: I loved your New Yorker cover of the girl and boy reading the same book on the subway so much I framed it and have it up in my apartment. It’s an image that really struck me, and I thought it captured a real feeling about city dwelling. Do you remember the moment and where you were when you saw the first New Yorker cover you drew on a newsstand?

Absolutely. At the time, my girlfriend (now my wife) was working uptown in Manhattan. It’s actually kind of hard to find The New Yorker around where we live in Brooklyn, so on the Monday when the issue came out, I took the subway up there, met Sarah for lunch, and we walked to one of those street-corner newsstands near Times Square and checked it out. I don’t want to sound overly-dramatic here, but it was one of those very self-aware moments, where I was thinking, “Here I am in New York City, I’m standing here with my amazing girlfriend, and there’s my drawing on the cover of The New Yorker.” And then of course, I started thinking that, as some kind of cosmic retribution, a giant meteor would drop out of the sky and crush me into the ground.

Having lived and worked on both coasts now, what do you think is the biggest difference between being an artist in California versus New York?
The humidity. I really love New York, but I have to say, the humidity during the summer is a nightmare for a cartoonist. Not only am I sweating in my studio, my bristol board is curling up, the drafting tape is peeling off the board, my Rapidograph pens bleed the minute I put them to paper…it’s a disaster. And these are issue that I never once faced in Berkeley.

I know you were probably hoping for a more profound answer, but aside from little things like the weather, my work process and atmosphere is pretty much unchanged. When I’m sitting at my drafting table in my studio, I could really be anywhere.

A few New York-centric questions, since Gothamist is a New York website: Which New Yorker do you most admire? Why?
Larry David, because he makes me seem slightly less annoying to my wife.

Tell us a (personal) New York story.
I went out to dinner with my wife at a sushi place in Brooklyn. Right as we were seated at our table, the couple at the adjacent table begins the following exchange:

WOMAN: So, did you read that book I gave you?

My wife and I locked eyes, like we couldn’t believe this was really happening. We sat there in silence, fakely looking through our menus while the guy proceeded to just eviscerate me in way that was not only cruel but also quite insightful and intelligent. The woman started to get kind of defensive, and she said, “Well, I don’t know. I thought the stories had kind of a nice poetic touch to them.” And that just set the guy off even further. He starts ranting, “No, no…you see? You’re falling for his bullshit! It’s not poetic! It’s like…he’s trying to seem poetic without really saying anything at all!”

I was absolutely paralyzed, and my wife couldn’t take it anymore. She asked the waitress to move us to another seat. They moved us to the sushi bar, but even from there, we could still hear snippets of the guy’s tirade. In particular, I remember hearing him say, “Oh, you must be joking. That was absolutely the worst story in the whole book!” When the couple finished their dinner and got up to leave, my wife started rising from her seat, apparently to give the guy “a piece of her mind.” I had to beg and plead and eventually physically restrain her from saying anything to him. The timing and coincidence of it all seems too implausible to believe, but I swear it’s true, and as far as I know, not some kind of elaborate prank.

Given the opportunity, how would you change New York?
I would put more trash receptacles around the city. The other day I was standing near Rockefeller Center with a half-eaten pretzel that I wanted to throw out. I must’ve walked around for fifteen minutes and I could not find a single garbage can. My wife wanted to go into a store, so I had to get rid of it, and I didn’t want to eat another bite. There’s thousands of tourists and shoppers swarming around, and not a single garbage can. Eventually my wife grabbed the pretzel from me and threw it into what we hope was a garbage can on the Today Show set.

On a related note, I think I’d introduce this concept we have in California called dumpsters. At my old apartment in Berkeley, we’d throw our trash in a big, communal, covered dumpster behind the building, and once a week, the garbage men would come and empty out the dumpster. There must be a reason why we have to just put the leaking, ripped-open, rat-infested garbage bags right out on the sidewalk in New York, but I don’t get it.

Also, I would demand that all fledgling businesses be put through a design/aesthetics screening process. It just kills me the way so many of these new restaurants and shops go for the cheapest, ugliest kind of exterior design…especially in Brooklyn. It’s like, you see this beautiful, ancient brownstone building, and then on the ground floor is some idiotically-named café with a sign that looks like it was designed in Photoshop by a toddler. I think it should be like the health code: if you don’t pass the inspection, you’re shut down.

Best cheap eat in the city?
Grand Sichuan on St. Mark’s, and Village Yokocho around the corner on Stuyvesant St.

Favorite place to read in New York?
The subway.

If you had one day left to live, and you were in NYC, what would you do?
Pretty much anything to avoid my imminent doom. Failing that, I’d take my wife out to dinner at a nice Thai restaurant, which is something I’ve never been able to do because of my extreme peanut allergy.