This winter there was an effort to save NYC's oldest independently owned cinema: that cute, one-story white brick theater on the corner of Henry and Orange Streets in Brooklyn Heights. But as with many battles between Old New York and New New York, the former rarely wins. Brooklyn Heights Blog reports the theater will shut down on August 27th, and has this statement from owner Kenn Lowy: 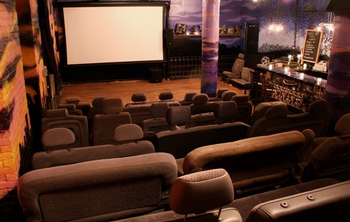 "After 44 years on Henry Street, we will have to move to a new location, a smaller space in nearby DUMBO.

The reason for our move is twofold. The number one reason is that nowadays there are not enough movie goers in Brooklyn Heights to sustain a two screen cinema. The other reason is that the building that the Brooklyn Heights Cinema has called home for over 40 years, is being sold. While economics would have forced this move anyway, it is happening now because of an impending sale.

When we began looking for a new location here in the Heights, it become clear that no suitable space was available. So we started looking in DUMBO. We are currently working to finalize an excellent location we’ve found and expect to reopen in DUMBO in late September or early October.

I know this is a huge blow to our loyal neighborhood customers and I hope you’ll visit us at our new location in DUMBO, a short walk away.

Your support earlier this year enabled us to purchase a new digital projector. Without that projector, moving forward would have been impossible. We are NOT going out business. We are simply relocating and nothing would please us more than if you continue to support us and attend the wonderful independent films we will continue to show, often films that you can’t see anywhere else in Brooklyn."

According to the Brooklyn Eagle, Lowy will open a single-screen cinema at the old ReBar space (which did have a little screening room) at 147 Front Street in October—he told the paper, “The ReBar space will be happy and lively again." No lease has been signed yet.