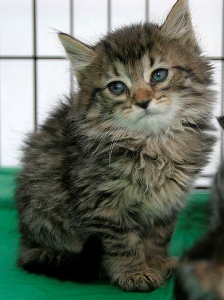 During the summers, city shelters see a spike in unwanted pets, and this year is no different. NYC's Animal Care & Control is "taking in 85 cats and kittens a day - up from about 50 a day just a few months ago," according to the Daily News. Animal Care & Control is worried they will have to start euthanizing adoptable cats and dogs, because they are, as director Richard Gentiles says, "being inundated." From the News:

Unlike the ASPCA, Humane Society and other shelters, Animal Care and Control cannot turn away any animal brought into its three shelters or left on the street.

It is the only nonprofit organization that holds a contract with the city to handle its stray and unwanted animals - about 44,000 every year.

The Mayor's Alliance for NYC's Animals is trying to take in some pets, but there are just too many. The Alliance's Jackie Hoffman says, "People are turning in their pets because they want to go on vacation. Or they got puppies and kittens and never spayed or neutered them, and now they are unhappy with their behavior because they are going into heat."