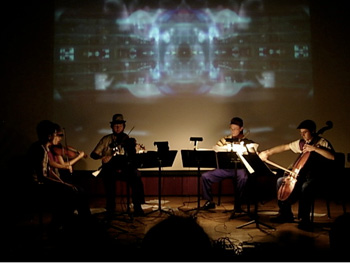 Composer Adam Mirza, and saxophonist Michael Ibrahim both lead their own groups. One's called Amp, the other Riot. Judging by titles, one might expect death metal, or by appearance, chamber music. But like many ensembles in New York today, these two groups fall under the category "new music," a term used to denote a genre that employs a vast lexicon of extended techniques to coax sounds from instruments generally deemed classical. Like the technology that influences it, this music is constantly evolving, but at a rate perhaps too fast for modern audiences to properly consume it.

With a new music series called the HiFi New Music Festival, which started last week, and continues through April 19, Mirza and Ibrahim hope to bolster the music's visibility by featuring some of the area's best bands, at the city's most exciting locations. They found some time between rehearsals to talk to us about the new music scene in New York, Karlheinz Stockhausen's Oktophonie, and what makes good subway listening.

First off, what's going on in new music today?
Michael Ibrahim: New music used to mean "avant-garde," "experimental," and existed as a "fringe" art form. These terms helped define its relationship to mainstream culture. More recently, the new music scene has grown to a self-sustaining size where its disparity from the rest of the world has softened. While this might sound as though things are more conservative than in the mid 20th century, you could also say that the new music arena is now more confident. Much of the music attempts to defy classification, but there's also a rich body of sub-genres (schools): spectral, post-minimalist, musique concrete, new complexity, neo-romanticism/classicism, and electro-acoustic are some of the more prominent ones.

Adam Mirza: At a very general aesthetic level, I think new music finds itself in a position similar to that of the other arts, at some undetermined space, let's say, beyond the collapse of the abstraction-representation opposition. Musicians and other artists are looking into other categories, such as technology, process, and material. But what allows new music to happen is a cultural scene in which it can grow. What is particularly exciting is the rise over the last 30 years of independent new music ensembles, several of whom have had national and sometimes international success. The breakthrough of the previous generation has offered a new target for young composers and performers. The new music ensemble is arguably the basic unit of contemporary classical music because it offers the right flexibility and identity for new music.

What was your motivation for creating the festival?
AM:There is an energy and vitality in the New York new music scene today; a rich assortment of interesting new classical music is being produced by independent ensembles. At times you can go to concerts almost every day of the week, each very different from the rest. From our perspective as directors of new music organizations, and speaking with other ensembles that we knew, a festival seemed to be a natural step to increase the visibility of this scene.

MI: Each group involved with the festival has its own audience base and vibe. We wanted to bring these different things together to create a big "mix and mingle".

What makes this festival different from other music festivals?
AM: The focus of our festival is promoting independent new music ensembles and the activity of the new music scene here in NYC. We considered the model of the Tribeca Film Festival, which offers a catalogue of decentralized events spread over several weeks. This format, for a music festival, allows each group to have their own show and to run it exactly as they want.

At the same time, we wanted to be sure that the Festival had a shape, and so we built in some structure in the form of mini-series at particular venues. Like the ensembles, each venue in NYC has its own distinct personality. While leaving the concert programming up to the ensembles, we tried to make each mini-series convincing and complete.

So, there is a three-day series (April 10th-12th) at the Tank, an intimate space in Tribeca marvelously suited for small ensembles. On the final day of this mini-series, there is a double-bill and then a party in their downstairs space. On April 14th-16th, Monkey Town will host three concerts featuring multi-media works. And the final event of the festival is a day-long production at the Hungarian Cultural Center in SoHo. The Center is essentially a long gallery space which we decided would be perfect for a concluding "marathon" style event involving several different groups.

How did you select the ensembles for the festival?
AM: We approached ensembles that had been active for several years, groups that had developed an identity and established themselves in some form in the New York scene. Also, we wanted to have a mix that addressed the diversity of new music.

What links them?
MI: Many of the performers play in multiple groups, and some of these groups will play music by some of the "classics" of contemporary music. Besides brand new works, there will also be music of Stockhausen, Wuorinen, Sciarrino, Reich, Ligeti, and Zorn.

You guys organized the festival, but you're actually either performing in it, or having your compositions played in it as well. Tell me about those projects.
AM: My new music organization, Amp, is presenting a concert on Saturday, April 12th as part of a double-bill with the JACK Quartet during the mini-series at the Tank. Amp has no permanent ensemble; rather, I organize a different group for each concert. For my concerts, I often program contemporary classics alongside new works of younger composers.

I am also performing a work of mine for electric guitar at the Monkey Solo! concert at Monkey Town on April 15th.

MI: I'll be playing two pieces on the Amp concert, April 12th. The first piece is a recent work by the New York composer Alex Mincek, for tenor saxophone and drumset, titled Nucleus. The second piece is by Stockhausen, titled Saxophon, and is for soprano saxophone and bongo. For both pieces I'll be performing with the fine percussion stylings of Matt Kantorsky. On the 19th, I'll play in a few groups. First, Riot is a trio for the saxophone, accordion, and guitar that I organize. Guitarist Oren Fader and accordionist William Schimmel are two of the most established contemporary music performers in the city. The three instruments tend to be outsiders in comparison to the standard classical instruments (flute, violin, piano), but come together as an adventurous team. We will be playing a program of new works written specifically for us by Richard Belcastro, Rama Gottfried, William Schimmel, and Samson Young. I also play with the Fireworks Ensemble who has been established for several years. We will be playing an early work of Philip Glass and recent post-minimalist piece by John Mayrose. Both pieces are very physical and relentless. My last involvement is with Red Light New Music. This concert features new works by Vincent Raikhel, Chris Cerrone, Scott Wollschleger, Liam Robinson, and Evan Johnson.

Aside from the projects you're playing in, or the pieces you wrote, can you name one thing about the festival that you're especially excited about?

AM: The final event at the Hungarian Cultural Center will include a talk on contemporary aesthetics with a performance of Helmut Lachenmann's Pression for solo cello. I first saw this piece performed in Darmstadt two years ago, and in an instant, I made a connection to Lachenmann's aesthetic. It is often said that recordings of his music are frustrating until you have seen the live performance; that was certainly true in my case.

Monkey Town, one of the festival venues, is known for their presentation of music combined with a video element. Can we expect to see some interesting visuals at some of these concerts?
AM: The performance space at Monkey Town is a white cube that uses all four walls as surfaces for video projection. The audience sits and dines on cushions and low tables with backs to each wall. The performance takes place in the middle of the space. The first and the last of the three concerts at Monkey Town will include processed video in conjunction with the music.

MI: Yes, on April 14th, Samson Young will be collaborating with the Matrix Music Collaborators. In addition to Samson Young's music, this concert features video by Christopher Lau and Ron Lam, and animation by Shirley Kwan. On April 16th, Sam Pluta has curated an evening of multimedia. Live sound, video, and film will be mixed together by his collaboration with Seth Cluett, Jack Turner, Daniel Iglesia, Scott Nyerges, Mike Vernusky, and Daniel Maldonado. Monkey Town also has great food!

How about electronic elements? Is there a large presence of electro-acoustic music?
AM: The two multi-media concerts at Monkey Town will feature music involving electronics. AudioVision2, curated by Sam Pluta, will have live improvisations on "invented instruments" and laptop. Look out for sparks. Ensemble Pamplemouse plays at the Tank on April 11th. Their concert will also include electroacoustic music worked in with the other chamber music.

What are some of the wildest things you've seen on stage lately?
AM: Stage equipment failure at the Met[ropolitan Opera]: a substitute Tristan sliding down the stage to hit his head on the prompter.

What other US cities are hotbeds of new music right now?
AM: I hear that Chicago is pretty active these days. Philadelphia, Boston and San Francisco all have established scenes. One of the beautiful things about art (and culture in general) is that one committed person can create vitality anywhere, so I am sure there are many more.

What was the last great show you saw?
AM: Here are two: Renate Rohlfing (piano), Chris Otto (violin) and Rachel Drehmann (horn) gave a stunning performance of Ligeti's Horn Trio last week. (This is a little self-serving: they are friends and the concert was one I helped organized. But it was a great performance.) Stockhausen's Oktophonie, performed on the Harvard HYDRA 32 speaker "sound orchestra". Well, this piece only used eight of those speakers: super high-end ones placed in a large cube around the audience. Stockhausen's later music confounded the "Darmstadt" aesthetic that had grown up around his earlier music. This work is a 70-minute, quasi new-age, electronic trip. An utterly bizarre experience, it takes you to the limit of what you think a concert performance can be.

What have you been listening to lately?
AM: Beat Furrer, Helmut Lachenmann, Glenn Gould, Masada (Live in Seville), Mozart

MI: I prefer to listen to new music at a live concert than on a recording. It can be tricky to listen to contemporary classical music through headphone on the subway so I usually stick to soul and funk.

The HiFi New Music Festival runs through April 19 at venues throughout New York City. Get the full schedule here.