Natassia Malthe, an actor and model from Norway, held a press conference in Manhattan yesterday to accuse movie producer Harvey Weinstein of raping her in a hotel room in London in 2008. Joined by prominent feminist attorney Gloria Allred at a midtown hotel, Malthe described the alleged incident, which is only the most recent in a flood of sexual assault and harassment allegations leveled against Weinstein in recent weeks.

Malthe said she met Weinstein during the BAFTA awards in London in February of 2008. During an afterparty, Malthe posed for a photo with Weinstein; when he asked where she was staying, she says she felt "put on the spot" and reluctantly gave the name of her hotel.

After she had returned to the hotel and had gone to bed, Malthe said she was awakened in the middle of the night by Weinstein yelling and banging on her door. Feeling "mortified and humiliated," and worried that other guests in the entertainment industry would think she was sleeping with Weinstein, she opened the door. She recalled that Weinstein "did not look normal" and she "wondered if he was on drugs."

"He did not use a condom," Malthe said. "However, he did not ejaculate inside me. After having sexual intercourse, he masturbated."

Malthe, who has had roles in films including This Means War with Reese Witherspoon, said she did receive a script for the film from Weinstein the next day, and once she returned to Los Angeles, she said the mogul asked her to meet him at the Peninsula Hotel, ostensibly to discuss the project. "I told [Weinstein] explicitly that I would go there but there would be no hanky panky," Malthe contends. "He told me not to worry about it."

Again echoing the accounts of many other alleged Weinstein victims, Malthe said she had expected Weinstein's assistant to be present at the meeting, but that was not the case. "There was another girl in the suite that I did not know," Malthe recalled yesterday. "Harvey came into the room in a robe and the girl took off her clothes and began giving Harvey a blow job."

After this second incident, Malthe called Weinstein and confronted him. She said that after she made it clear she would not have sex in exchange for a movie role, Weinstein called her an "ungrateful cunt." She became "depressed and anxious" after these encounters with Weinstein, and eventually left the United States. 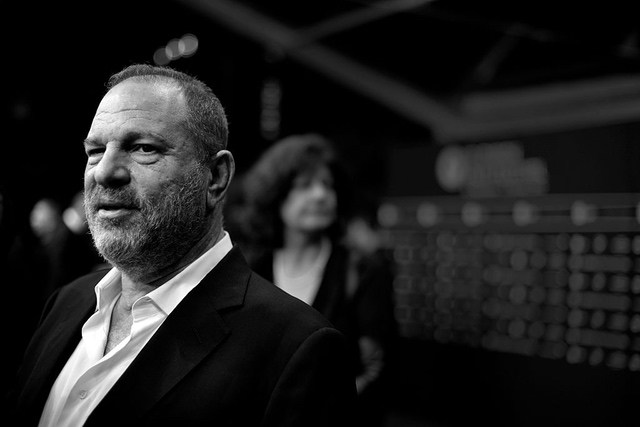 When asked if Malthe planned to go to the police with her allegations, Allred said Malthe is "considering what her options are" and that there's been "no decision" in the matter at this time. Allred admitted, however, that she herself has been in touch with the NYPD, but would not elaborate.

Allred did reveal that she had been scheduled to meet on Wednesday with the board of the Weinstein Company, but the meeting was effectively canceled; Allred said she was referred to company attorneys instead.

In a statement, Allred explained that she had been hoping to propose the idea of a victims' trust fund to the board, which could be used to compensate sexual assault victims at the discretion of an arbitrator. "I'm not interested in PR damage control," she said of the board's previous attempts at reparation. "I'm interested in action."

According to a Weinstein rep, "any allegation of non-consensual sex are unequivocally denied by Mr Weinstein. With respect to any women who have made allegations on the record, Mr Weinstein believes that all of these relationships were consensual."

With Natassia Malthe's accusations coming on a day after a former production assistant's account of her alleged sexual assault by Weinstein, Allred indicated that the allegations were far from over. She says she has been contacted by numerous other alleged victims of Weinstein, some of whom retained the services of her firm and expressed a desire to speak publicly. Allred said that another victim will come forward "soon."

#harvey weinstein
#Natassia Malthe
#rape
#sexual assault
#original
Do you know the scoop? Comment below or Send us a Tip