Michael Stahl-David, who you may recall as the last yupster to be killed in Cloverfield

, is currently co-starring in an off-Broadway play inspired by Ruth Madoff, wife of infamous high-finance grifter Bernie Madoff. Written by Amanda Peet and starring Blythe Danner and Sarah Jessica-Parker, Commons of Pensacola concerns a formerly aristocratic woman named Judith (played by Danner) who finds herself slumming through her twilight years in middle class Florida squalor after her husband’s Wall Street scam became headline news. Stahl-David plays Jessica-Parker's significantly younger boyfriend, who has come down to Judith's shabby condo to persuade her to participate in a documentary about her role in the financial scandal. Angry accusations, cruel betrayals and bitter laughter ensue. Last week we spoke to Stahl-David about the play, which continues through January 26th, as well as his past life as a graffiti artist and his tips for chiseled abs.

Did you follow along with any of the whole Madoff saga when that was going on? You know, only in a superficial way, to be honest. I certainly heard about it, and I may have read a couple of short articles, but I didn't do any of the in-depth reading until I got the part. And then, I read some of the longer articles and I read a little of the biography. It's a really incredible story. It was useful because I was finding it hard be really hard with Blythe [Danner]. I was so charmed by her and I was really trying to play against the inherent agenda of my character and find his humanity, you know? But, doing some of the research and reading about the level of denial that was going on and thinking about what it was like to grow up in a family like that, I found a protective feeling for Rebecca, the character of my girlfriend. It was almost like wanting to wake her up.

Did you feel like you developed any deeper sympathy for her? Or is it the opposite? That's an interesting question. I would think probably deeper sympathy. There's been a lot of speculation in this play obviously, and in other writing, about what she knew or didn't know—I won't speculate on that. I think it's incredibly painful to have the foundation of your life be ripped out from under you. And I don't wish that on anybody.

Did you know who was in the cast when you were considering the role? I did know about Blythe and Sarah Jessica, yeah. That was very exciting to me. But to be honest I hadn't seen much of their work. I'd seen a little of Sarah Jessica's movie work and a little bit of Sex and the City, but I hadn't watched much of it. And with Blythe it was a little more tenuous. I knew she was a big deal, I knew her name and I knew she'd been around forever, but I wasn't actually that familiar with her work, either. I knew the caliber, the pedigree, and that was exciting. I heard, as I started telling people about it, great things about both of them. They have a really great reputation in the theater community as being wonderful people to work with. I was like, "Look at all these fancy ladies!" And Amanda Peet's not a bad person to get to know a little bit, and [director] Lynne Meadow, obviously, so it was sort of a home run in that vein. 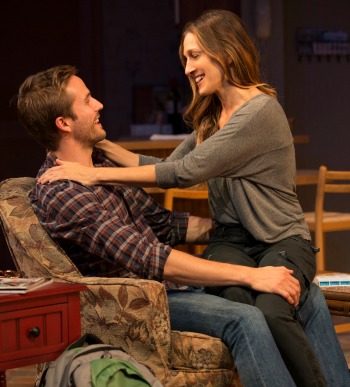 (Joan Marcus)
I always wonder how younger actors deal with working with really older, bigger, established talents. How hard is it to get over any sort of anxiety or feel comfortable?

They both made it really easy. I think that could be harder in other circumstances, although I guess I've been really lucky. I mean, I did a pilot this year with Felicity Huffman and Anthony LaPaglia and I didn't struggle with that too much. I think it's also due to the fact that they didn't treat me like, "Who is this kid? What does he know?" You know, Sarah Jessica-Parker is one of the most conscientious actors I've ever met. She's very considerate, it's just a huge part of who she is. It's how she goes through the world. That is especially true for her castmates. She's very careful and respectful. And Blythe is just really sweet. She also has this actor thing like, "Let's talk about it." She'll come backstage after a scene and ask, "What did you think tonight? I did that thing differently. How did that work for you?" It's amazing, how much of a collaboration it's been. So, I'm just lucky, I think.

Do you identify with Sarah's character at all? She's a struggling actor who just couldn't get a break. Have you had times like that? I certainly struggled. But I've also been pretty lucky since I moved to New York. I had a couple months when I was bike taxing and trying to get my start, and then I got really lucky and got this series, The Black Donnellys. Since then, I haven't had to babysit or anything like that.

How old were you when you got that? I think I was 23 or 24. But I can certainly relate.... but I think that more so, her issue is being an unmoored person and not feeling like she has a really strong sense of self. I guess I've gone through phases like that, too.

How big of a deal was it for you when you got cast in Cloverfield? It was a huge deal! It was a huge deal. I remember my agent was sort of shocked. I think that to be an unknown booking a studio film that big was pretty unheard of. The only reason that happened was the form of what they were doing. They wanted it to be quasi-unrecognizable people. So, that was a huge deal. Also, to be the lead and kind of carry this big movie and to do the hours—that was a pretty intense schedule—it felt good. It was a big deal and incredibly exciting and it also felt good to have that responsibility.

Is JJ Abrams going to do a sequel? I feel like if he wanted to do another thing, I probably wouldn't be in it. It would probably be from another point of view. I think a sequel would be too easy with the same characters. That's not what he's gonna do. Maybe it's that I ruined my relationship with them. I did this in the fictional version of my life. I did this web series where he came on and left me a voicemail saying he had all these ideas for a sequel to Cloverfield, but I blew it, and he left this very hilarious voicemail at the end of an episode. But in real life, I think he's not interested in it. It's in, "Behind the Star," which is a mockumentary of my life after that movie.

I watched the top video yesterday and it was funny. Like in Commons of Pensacola, you take your shirt off. How do you get your abs so chiseled? Maybe it's just anxiety, maybe I'm just always clenching.

Do you have any tips or ab secrets to share? No, I just have an inherent good metabolism. That's just my fuckin' dickhead fuckin' tip for ya. I mean, endorphins are how I get happy, so I run and shit, play soccer. The hard thing for me is to get bigger. That's a struggle for me. But, anyways, who cares.

You used to do a lot of graffiti right? Did you have an interest in the Banksy stuff that was going up earlier? Yeah, no, it's been years since I done it. I came and went before it had evolved to the Banksy stuff, which I think is totally fun and really a smart evolution of street art. What I did was much more, you know, traditional graffiti. Some of it was colorful, big, and pretty, and some of it was my fuckin' tag on a lamp post. That's what I think it was about. I think it was about trying to create an alternative identity as a teenager and wanting an alter ego that was tougher. Because that's what a graffiti handle becomes.

Did you ever get arrested? Oh, I got arrested like ten times. Yeah, I was getting in a lot of trouble and I wasn't interested in pursuing a career in visual arts at all. Who knows? If I'd been really serious about acting then, who knows what would have happened? There was a certain aspect of me being lost. A certain aspect of me not being happy. It wasn't actually deeply satisfying. It was an addiction, in a lot of ways. Acting was something that sort of actually saved me from that.

What was your tag? I was Comie.

Where did that come from? I think the statute of limitations on that is okay.... it's been over ten years... They can't prosecute me, right?

Yeah, you're fine. I was also into left wing politics and taking that derogatory and claiming it. I led a walk out against police brutality in high school, as they were bringing metal detectors and more cops into my high school. If you ever want a place to prove to a 17 year old the inequalities of our society, just stick them in a public high school in Chicago with a tracking system. There's no place that's more racist. Just by the nature of our society—it's not even that the teachers or administrators were bad people—but it gave you such a terrible snapshot of our society.

Do you ever bust out the tag? In a bathroom or something for old time's sake? No..... I won't vandalize anymore. I've lived my nine lives on that, so I'm extremely paranoid.