Actor Michael Shannon, Mistakes Were Made

by John Del Signore
The inimitable Michael Shannon first caught our eye in his role as the menacing brother in Before the Devil Knows You're Dead. Or maybe it was when he played the Corrections Officer in Vanilla Sky? Or was it Tigerland? Shannon's one of those ultra-distinctive actors who draws your eye away from high-wattage stars like Tom Cruise simply on the strength of his fascinating presence. For years he's been stealing scenes from the edge of the frame, but now he's front and center; last year he was nominated for an Academy Award for his role Revolutionary Road. You can currently catch him in the HBO series Boardwalk Empire, and he's also live onstage at the Barrow Street Theatre in the West Village, where he stars in Craig Wright's almost-solo comedy Mistakes Were Made, about a frustrated, small-time theater producer moving heaven and earth to shepherd a pretentious play about the French Revolution to Broadway. Except for a brief appearance by his assistant, the production is 90 minutes of straight Shannon, and the only other performer left for him to steal scenes from is the guy who operates the puppet fish. In the wake of some glowing reviews, Mistakes Were Made has been extended through February 27th.

Why is that? I don't like it when they get all hot, after you've been on the phone for a long time. There's no way that that can be good for you.

When you're doing the play, I assume you're imagining that you're hearing the person's response on the other end? Yes, I am imagining their response. I've actually gone through and figured out all the responses and written them down, so I can try to imagine—Yeah, in order for it to work I have to get wrapped up in the conversation. And I think you can figure out a lot of what they say based on what Felix says. Craig [Wright], the playwright, has woven their responses into my dialogue in a very subtle way. But I think even people in the audience sometimes can even imagine what they're saying, based on what I say back to them.

When did you get involved in the play and what was it that made you really want to do it? Well I did the play a year ago in Chicago; I'm a member of a theater there called A Red Orchid Theatre, and I had worked with Craig on a couple of his other plays, so we had some history together, and he just showed me the script and I read it and fell in love with it right away. I just thought it was really funny and also very complex, and I think the play's about a lot of different things other than what it appears to be on the surface. I enjoy doing work like that.

On the surface I guess I would say it's about a really frustrated producer who's got a whole lot of things going on at once and he's very stymied at every turn. Can you talk about what you think is going on beneath the surface? Well, I mean, there's a number of different possibilities. Craig was a divinity student for a long time; he was going to be a preacher. And at one point he said to me, "When I first started writing this play, Felix was God, particularly God dealing with the universe. The idea of God as a theater producer." Because the fact of the matter is that it's a play about, why do people bother doing this at all? There's a number of different reasons put forth in the play. At one point Felix says to his ex-wife, "I'm producing a play which I think gets at the heart of the issues that drove us apart," and I think maybe that theater is useful as a way of communicating some of the things that have happened to you, or problems you might have. But I don't know if it ever works, or if it's ultimately, as Felix says in the play, no matter how much blood, sweat, and tears you put into it, people seem to so rarely make that meaningful connection with what it is that is happening.

There's that famous W.C. Fields quote about never performing with children or animals. There are "fish" on stage. Were you at all worried about being upstaged by the fish? No, I love the fish. I've got no problems. If someone sat and stared at the fish for 90 minutes nothing would make me happier. It doesn't bother me at all. 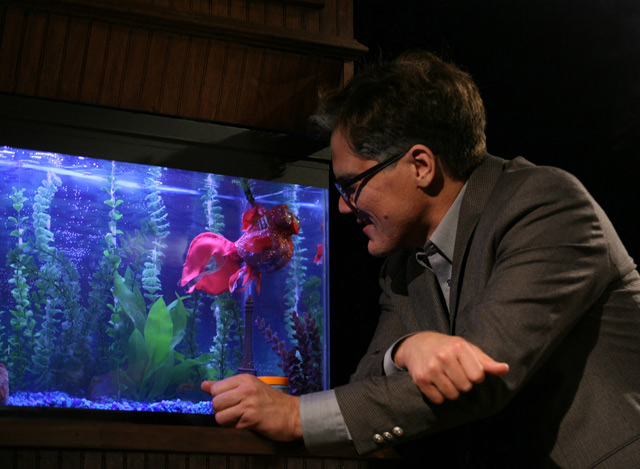 Who is the person who actually brings the fish to life? A puppeteer, Sam Deutsch, his name's in the program. He built the puppet and manipulates it during the show. He's standing back there in the cabinet.

The entire time? Yes. From when the house opens til the end. He comes out in the curtain call. He's the little fellow in the black outfit, the fish.

What do you think the significance is of the secretary saying "Don't feed the fish. You're not feeding the fish, are you?"? Well, I think in a way it has to do with... Fish for Felix, I don't want to go into it too much for someone who hasn't seen it, but he just went out and got the fish after his daughter died, and he's trying to take care of this fish because he didn't take of his daughter very well. So he overcares for it, and he gives it too much, so he's erring in the other direction. Once he was negligent, now he's overcaring, which I think is another theme in the play. It's always so hard to figure out how much care or attention to give to things. What's too much, what's not enough.

This isn't a one-man show, but it's almost a one-man show. Have you done a completely solo show before, and do you miss working with other actors? A long, long time ago I got it in my head to do Drinking in America, the Eric Bogosian monologues. I don't know what I was thinking, I just thought they were really fun, and I wanted to do them. But that was almost 20 years ago. I like having someone else out there, for sure. That's one of the most fun parts of acting, building a relationship with somebody on stage. But I act like I can do that with the phone calls, like those people are there. In actuality there's a ton of people in the play, you just never see most of them.

You were just in a play not too long ago there, you stepped into Our Town at that theater. I didn't see you in it; I saw it with David Cromer when he did it, and I really loved it. But I also saw you in Lady, which was really terrific. Ah, that's a Craig Wright play as well.

What do you think it is about his work that you connect with? Like you kind of alluded to earlier, it's just the spiritual aspect of it. I think Craig is very grand in his scope, and the themes that he tackles in his plays are very complex and very important, I think. I know that this play, it seems on the surface that something not of huge consequence is happening. But it's actually huge. Lady starts off that way too, with something pretty simple or innocuous and it leads to all these complex questions. I just enjoy his philosophical imagination.

You've also been filming for Premium Rush, a bike messenger movie. During filming some bloody accident photos of Joseph Gordon-Levitt emerged. Joseph Gordon-Levitt played the bike messenger, and some others are bike messengers, yeah. He just got in a predicament one day on the bike, I think it had something to do with the United Nations or something, and there were all these diplomatic cars trying to drive around. They don't have to follow the rules or something, so I don't know. One of them caused an accident, and Joe got in the middle of it. But he's fine now.

Do you get on a bike at all for the film? No, my character's not a bike messenger. I drive; I chase him around in a car. So I have a car and he has a bike.

Do you think your stage work has been influenced by the film work you've been doing? Is there any sense that you've grown as an actor in either direction, with film or with theater? Do they overlap at all, or are they two totally separate mediums for you? They're pretty separate, yeah. They don't really feed off each other very much.

I saw you in that Werner Herzog film [My Son, My Son, What Have You Done], which I really loved, and I'm wondering if you can talk about what it was like working with him? Oh, Werner. Well, he's very sure of himself, I mean he knows what he wants. I really enjoyed working on that film because he'd been making some pretty straightforward films for a while, documentaries and things like Rescue Dawn, so he had a lot of unusual ideas and a lot of things he wanted to do. It was fun to be a part of it. I feel like with him, any movie you see of his is ultimately about him, which I'm not saying in a narcissistic sense. It's because he has a very unique mind. People seem to think that Lynch had something to do with this film, because he was the producer, but all he really did was put his name on the poster. He didn't get involved in any creative way. It's Werner's show from top to bottom.

#interview
#michael shannon
#mistakes were made
#theater
Do you know the scoop? Send us a Tip