Miss Saigon. (Actor's Equity at first refused to let him perform in NYC because Pryce is Welsh and his character is not, but they finally relented after producers threatened to cancel the production altogether.) Pryce went on to win his first Tony award for that show, and later starred in such films as the James Bond flick Tomorrow Never Dies and the Pirates of the Caribbean series. You may also remember him from his brilliant performance in Terry Gilliam's Brazil, or his beautifully nuanced turn as Al Pacino's anxious mark in Glengarry Glen Ross.

You can currently catch Pryce in the successful touring production of Harold Pinter's first hit play, The Caretaker. Set in a dilapidated London flat, Pinter's evocative dark comedy concerns a homeless man (played by Pryce), who finds himself caught in the crossfire between two bewildering brothers. As the Guardian put it, "Pryce gives a first-rate performance that gradually reveals the viper lurking underneath the vagrant." The production continues at BAM through June 17th.

How long have you been doing this production? We started in late 2009 at Liverpool where we played for four weeks, then we did it in London for nearly four months, finishing early 2010, which is when we had the offer to come to BAM, so I've been waiting two years to get here. I think on this particular tour we've clocked up to something like our 65th performance.

What do you think it is about the play that still resonates? Well it's a number of things. I did it first in 1980 when I played Mick for the BBC, and then we staged that TV production at the National Theatre, and I realized then what an extraordinary performance piece it is. It's quite deceptive and elusive on the page—and you can have many misconceptions about Pinter—but it's very moving, and it's very touching and very funny.

I suppose coming to it 32 years later, the play is the same but the audience's sensibilities and perceptions have changed, and certainly my sensibilities towards pieces change. It has become in my mind—with the way it talks about mental illness and homelessness—it's become a much harder play, because those issues are kind of in your face all the time now. There are many more homeless people with psychiatric problems. So I think the appeal to the audience over the years is that, yes it was written in about 1958 and first performed in 1960, but it is—unlike many plays from that period—it's kind of timeless, because it deals with more universal issues, more about humanity and a shared view of humanity. And it's about relationships. They're fairly basic, really—people's desires and needs, wanting to be loved, wanting to feel secure. My character Davies is desperate to be taken in by the two brothers. So the brief answer is that it's fairly timeless.

Did you see the original production? No, I didn't. I'm old, but no. My interest in theater started quite a bit later. I wasn't that interested in theater prior to going to drama school, so I didn't see it. But I know people who did see the original production and can still talk about the huge impact it had on them because there hadn't really been a play like it at that time.

Right, it's such a radical departure, and it still seems radical in some ways from most conventional theater. Yes, it certainly depends. It can be interpreted in many different ways, and I think what we have attempted to do is to get away from people's preconceptions of Pinter, from this word that Pinter himself hated, which is "Pinteresque," where the pauses and the silences are rigidly adhered to. I think what we try to do is humanize the play and make the characters real people, which is what Harold wanted and what he was writing about. That's the quick answer there. 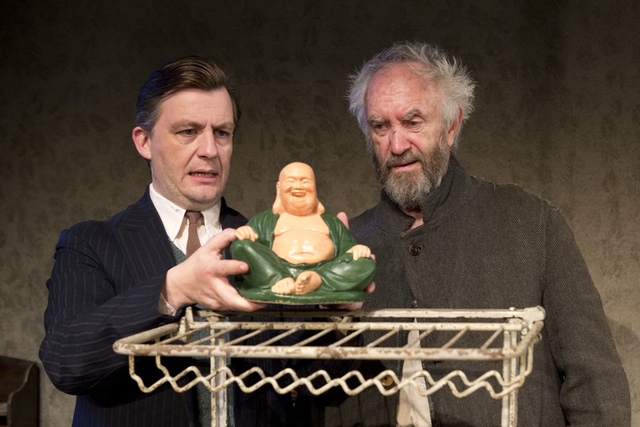 Did you ever meet Harold Pinter? Were you friends with him? Yeah I did. 1980 is when I first met him, when we did that first production and he was around for rehearsals. We only talked a little about the play because he's a bit like me as an actor: you don't give away too many secrets, and he was never one who wanted to say 'this line is about something' or 'the play has a concept.' He didn't feel that was necessary and everything, all your clues, are there in the text.

One of the few things he did say, when we asked him about the pauses and things, was that they were there if you wanted to use them, and at the time he said that they were often indications of where a laugh could be. He would say different things to different people, but on that day, at that time, that's what he said about his pauses. Over the years we remained in contact, and I would see him at various functions and things. Before he died he knew we were going to be doing this production starting in Liverpool and he was very happy for it to be happening. He was very happy that I would be playing Davies after playing Mick, and he gave it his blessing. There's obviously a huge regret at his passing, but it's also a great regret that he didn't see us do it. His wife, Antonia Fraser, has seen it three or four times now and she loves it. She says it's exactly what Harold would have wanted, so that's very pleasing.

I just have enormous respect for him, his work and also his willingness to say very unpopular things about U.S. foreign policy and at the same time England's foreign policy. That speech he gave after winning the Nobel Prize was just tremendous. Yes, well that's also one of the main reasons I admired and respected him. He was a very strong political animal behind whatever he wrote.

And it's so great because you know that it's there and yet—maybe in some of his later plays it's more explicit—but in his most famous plays I feel like the political is there but it's so much in the subtext. Do you think there's a political dimension to a play like The Caretaker? Well, the social politics are certainly involved in this piece; you know he was a young man still forming his ideas when he wrote it. It isn't overtly political, but you know it's written by someone who cares deeply about humanity and wants to—as you always want to do on stage—to engender compassion from the audience. You want to shock them, you want to frighten them, but you really want them to go out at the end a little bit more aware of their fellow human beings. It's an extraordinary medium, theater, even more so than film in that—especially with a play like Caretaker that has three characters—in the audience you're a voyeur for a little over two hours where you can just stare at another person for as long as you want to, which you can't do in life. Hopefully you come away from that experience learning a bit more about people.

Can I just switch gears for a second and ask you about Glengarry Glen Ross, because that's one of my favorite films and I loved your performance in it. What do you remember about doing that film? Do people still talk about it? It was a really good experience, that particular part, because it was the one I could do and still do Miss Saigon at night. I was filming, just for a week or so, during the day. It was a great company of actors, and we rehearsed it for a couple of weeks as though we were rehearsing a play. And I got to sit in a booth with Pacino and we talked for hours between brief takes.

I got to meet Jack Lemmon, who I adored, and I eventually played Shelley Levene on stage in London about, oh God I can't remember, five or six years ago. It was, coincidentally and ironically, a piece that was championed by Harold Pinter, because that play was sent to Harold by David Mamet, who was a stranger to him. But he said, "Can you give me any advice about this play? Any changes you think I should make?" And Harold sent a message back saying, "Absolutely no changes necessary and I'm taking it to the National Theater." And it had its premier in London, all thanks to Harold. Mamet's writing, the style of Glengarry, is very similar to Pinter's early plays. It's very speakable, it's conversation, and you don't want to change it, really. Not that he'd let you anyway.

Have you watched that film at all recently? No, but it's a very popular film with a lot of people who come up to me. It's interesting what films people identify you with; they always confound your expectations. They say, "I really loved you..." and you go, "Oh here we go, it's going to be James Bond," and then they say Carrington, or something off the wall. The biggest one is Brazil, that seems to be fairly universal.

#bam
#harold pinter
#interviews
#jonathan pryce
#theater
Do you know the scoop? Comment below or Send us a Tip