Soon, thousands of old newspaper articles, dated between 1835 to 1999, will be available online through the Brooklyn Public Library’s digital archives. These historic clips will come from 41 different publications, including the Brooklyn Citizen, Daily Long Island Democrat, Greenpoint Home News, Flatbush Times, and the Canarsie Courier.

“There’s a really good mix of important newspapers of the time and local Brooklyn titles,” Natiba Guy-Clement, librarian and manager of special collections at Brooklyn Public Library, told Gothamist. The library’s Brooklyn Collection team has already digitized 21 titles, and Guy-Clement expects to have the remaining 20 uploaded soon. “We just sent out our last shipment [to be digitized], so we should have all these titles uploaded in the next six to eight weeks.”

Once the digitization is complete, the public will be able to access the historic clips online for free via host site Newspapers.com. However, this will only work when you're at the library. “Currently our agreement with Newspapers.com is that we can make [the articles] available at all the neighborhood branches in Brooklyn,” says Guy-Clement. “After three years they will be freely accessible anywhere in the world.” So for now, researchers, historians, and curious New Yorkers will have to use either a designated Brooklyn Public Library computer, or connect their laptop to the library’s WiFi for unrestricted access.

Meanwhile, old issues of the Brooklyn Daily Eagle are already available online, and access is unrestricted for those—you can search old issues here. The below newspapers will follow this existing Eagle model once the library’s agreement with Newspapers.com lifts in 2022. 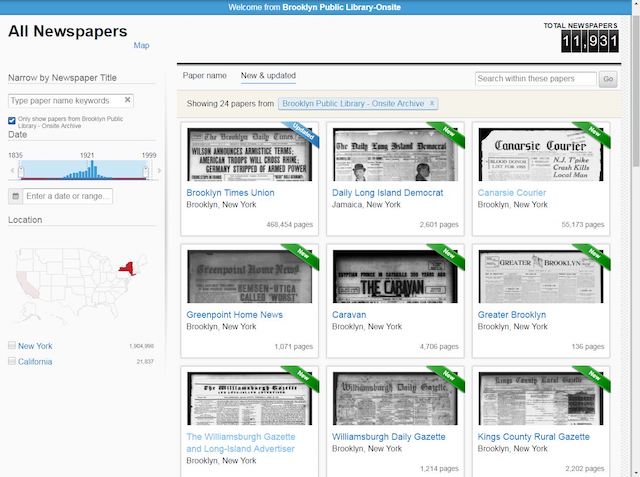 Here's the complete list of the forthcoming online newspaper archives: