Since March, three members of the Moscow-based punk band Pussy Riot have been behind bars, following a late February performance in a cathedral there where they called upon "St. Maria, Virgin," to "Drive away Putin." Their trial came to a close today, and a verdict is expected on August 17th. Here's a timeline of the major events up until now.

February 21st: Pussy Riot entered the Cathedral of Christ the Savior in Moscow and performed a song called “Madonna, Drive Putin Away." They were ejected by the church’s security guards. It is caught on film and uploaded to YouTube:

They later said their performance was meant to highlight the close relationship between the church and state.

March 8th: This was "International Day of Solidarity" with Pussy Riot, and a number of protests were held.

March 15th: Yekaterina Samutsevich is arrested, and the women are charged with “hooliganism.” The three women are now under 24-hour video surveillance.

Throughout the month of March appeals are rejected; members of the band with children are threatened with having their parental rights taken away; and the family of Maria Alyokhina (including her young child) are receiving death threats. 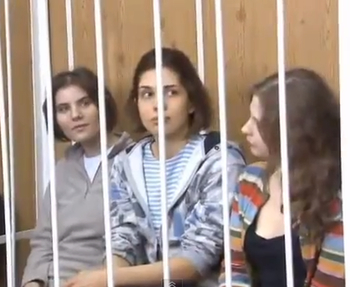 April 19th: A judge rejects the women's request for bail and release, and instead, their custody is extended.

May: Support for the women is growing, media attention is growing, and Kathleen Hanna announces a benefit in Brooklyn for the band. She says, "The case illustrates the gross level of violations against human rights in Russia and requires immediate attention. The detained activists now need the support of the world’s community." OpenDemocracy questions why they are still in jail.

June: The court still refuses to set Pussy Riot free, despite the growing media attention. The Moscow Times calls it a "witch hunt."

July 4th: Nikolai Polozov, a lawyer for Maria Alekhina, says "There is nothing in Russian law that could qualify these actions as criminal. The case is full of procedural violations and they are trying to speed up the hearing to ensure that we don't have time to respond to them all." Another lawyer representing the women says, "The decision has been taken at the highest level that they should be kept in jail."

July 5th: Around this time, it's reported that the band has gone on a hunger strike.

July 30th: The trial of Pussy Riot opens. Journalists from inside the courtroom Tweet about the bizarre proceedings.

August 2nd Putin, who began a six-year term in May, finally acknowledged the situation. He said, while in London, that there was "nothing good" in the trio's performance, but that the three women "should not be judged too harshly" over the protest, which they said was not intended to offend believers but to highlight the close relationship between the church and state.

August 3rd: "A group of journalists wrote a letter saying that they were 'humiliated, kept on the stairs for hours, barred even from the floor where the sessions are held; [the journalists] are pushed, yelled at, physically driven out from the courtroom.' The letter added that the court marshals had threatened to set the dogs on reporters."

August 6th: Lawyer Mark Feygin said the defense had been “curtailed, aborted during trial…. Without witnesses, experts, specialists the value of our evidence is significantly diminished…. The court refrains from objective and comprehensive examination of the case.” He says that he anticipates a conviction.

"We sang 'Black habit, gold shoulder straps' about the fusion of KGB and the church," band member Nadezhda Tolokonnikova said in court. "Our goal was political protest in artistic form. There was no hate, not a drop."

Kathleen Hanna puts out a call to action, calling the trial "a total farce," adding, "When my band Le Tigre wore STOP BUSH dresses and spoke out against racism, homophobia and sexism we feared not getting a fair shake in both the music industry and the underground scene, but never jail."

Madonna also spoke out from the stage in Moscow, urging Russian authorities to free the three members.

Michael Idov, Editor-in-Chief of GQ Russia, writes a piece for the NY Times: the "Pussy Riot trial is Russia’s Nazis-in-Skokie moment, its Hustler v. Falwell, but it is unfolding amid universal disregard for the letter of the law. A case that should pivot on a specific legal question ('Does a violation of church protocol rise to the level of religious hatred?') instead hangs entirely on emotions, including those of Patriarch Kirill I and President Vladimir V. Putin, that the judge and the prosecution appear to be trying to divine."

August 8th: The trial is wrapped up, and a verdict is set for August 17th. And here comes the Next Media animation treatment...

Find out how you can lend support to them at Free Pussy Riot.

#moscow
#pussy riot
#putin
#russia
#timeline
Do you know the scoop? Comment below or Send us a Tip