A Sneak Peek Of The New Elevated Park At Governors Island

Standing atop a 70 foot mound of densely-packed gravel and dirt Tuesday, landscape architect Adriaan Geuze took in a view that, not long ago, was impossible. From his perch atop the new Outlook Hill on Governors Island, the entire New York Harbor spread out before him, a 360 degree panorama that includes the Statue of Liberty, Ellis Island, the Lower Manhattan skyline, and Red Hook shipping docks.

"This park is an interface for exploring the horizon," the Dutchman said after stepping down.

Geuze is the designer of The Hills, a massive new park that has literally raised Governors Island to new heights. Its biggest draw are the four mounds that range from 25 to 70 feet in height, each with a specific name and deliberately-designed vantage point on the Harbor. Paved roads wind between them, offering a kind of hide-and-seek game with the Statue of Liberty and World Trade Center. All of this is intentional: The Hills was designed to use some of the world's most famous landmarks as points of reference kept out of view until certain, expansive moments. 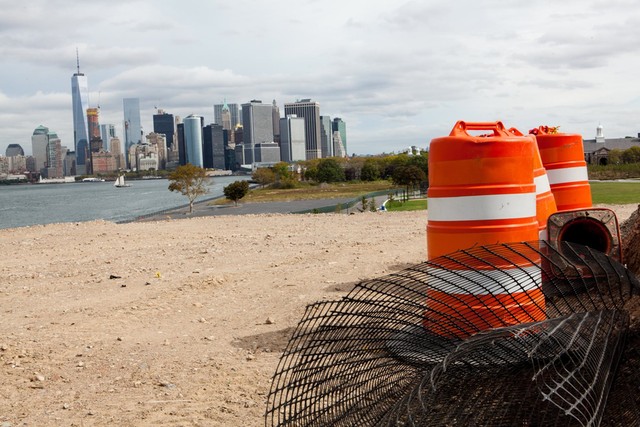 The views are in large part the result of piling up recycled materials; the busted remnants of buildings and parking lots sit below the gravel and dirt. The recycling defunct elements of Governors Island's past is a pillar of the entire project, and one hill can be climbed via a path of giant stones—pieces of an old sea wall constructed by Army engineers in 1905.

Scheduled to be finished in 2016 and previously closed to the public, The Hills will be opened for public tours (hardhats included) this weekend, just as the Island closes for the season (selfie sticks will be provided). Visitors will be met by steep, rocky mounds and guided tours up the graded paths that have been flattened into each one. It's meant to feel maze-like; Geuze told reporters Tuesday that each hill is part "an extended innovation concept which more or less creates a topography that manipulates the eye, explores the horizon, [and] creates suspense."

The park's new elevation ensures that trees planted there will continue to grow, even in the wake of Sandy-sized storms and the gradual creep of rising ocean levels. Leslie Koch, President of the Trust for Governors Island, pointed to the rocks and new sea ledges that have been built as a part of the park. "When you're sitting and enjoying the view on a peaceful day, you're actually sitting on a resiliency measure that was built into this," she said. Koch stressed that during the days after Sandy, only eight out of the park's 1,700 trees were lost—a testament to the island's new raised elevation. 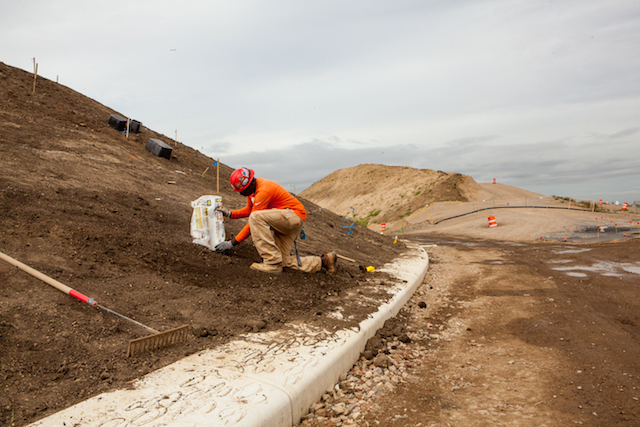 A rendering of the completed Hills

"This will be a legacy park, which can grow to be two hundred years old, easily," Geuze added.

Walking around the park, the hills do offer spectacular views of almost every landmark in the harbor, and even in Tuesday's dull overcast light, it was easy to envision the finished product's appeal for tourists and locals alike. The Hills offers something truly novel, and what makes the park a true boon to Governors Island is its creation of topographical variety, an exciting, Y-axis relationship with hilly land that's all but unheard of across the rest of the city. "Most New Yorkers don't ever get to experience that view: a view from on high in the city that created views," Koch said.

Riding away from The Hills on an electric cart, Geuze quickly turned and pointed back toward the harbor. "Watch this," he said with a smirk, as the road curved and the Statue of Liberty's torch came back into view.