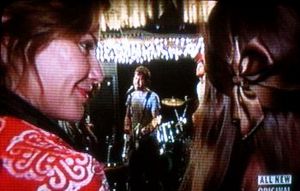 Like it or not The Real Housewives of New York are getting air time every Tuesday, and each week they invite the rest of New York (and the world) into a little bubble they call home. Touring private schools for their French-speaking children, toting their kids off to auditions, getting away to the Hamptons and presumbably being "fabulous" at whatever else fills their social schedule.

Last night one of the "housewives," The Countess LuAnn, broke out of the bubble and headed downtown to live vicariously through her niece, who took her to Cake Shop after a dinner at Little Giant. After imbibing a few grapefruit margaritas at the restaurant she was woo-hooing in the front row for a local band (anyone know who they were? Surely they were thrilled with their BravoTV debut).

Perhaps the Countess wasn't as comfy as she seemed in the venue however, one Williamsboard poster recounted the awkwardness: "this made it to air? when i worked at cake shop, the 'countess' came in all dolled up in ridiculous garb (some sort of red smokers jacket or kimono thing) with huge cameras and lights in tow to see a show. she reeked of perfumed and was obviously uncomfortable and out of place seeing an indie band in a dirty LES basement bar. we were all snickering."