A Rare Look Inside The Abandoned Buildings Of Governors Island Before Governors Island had glamping and hammock groves and the city's best lobster roll, it was a military island—and beyond its modern touches, much of its history remains today. There are over 50 buildings in the Island's historic district, besides the two forts which are national monuments. While the exteriors of most of the buildings are preserved and landmarked, the interior of almost all buildings can be renovated. But many are not.

Until they all find the right tenants—and the Governors Island Trust are actively seeking proposals from prospective tenants—they sit in abandonment, like lovely overgrown odes to the past. Time has made them creaky and dangerous, so visitors to the Island aren't allowed inside of these buildings. But this summer, we got to explore a few.

Click through the photos for a look, and learn more below about the buildings and the Island, which has been home to everything from a Burger King to a military prison (at Castle Williams) to a nuclear arms talk between Reagan, Bush and Gorbachev to a school for some of New York's luckiest kids. 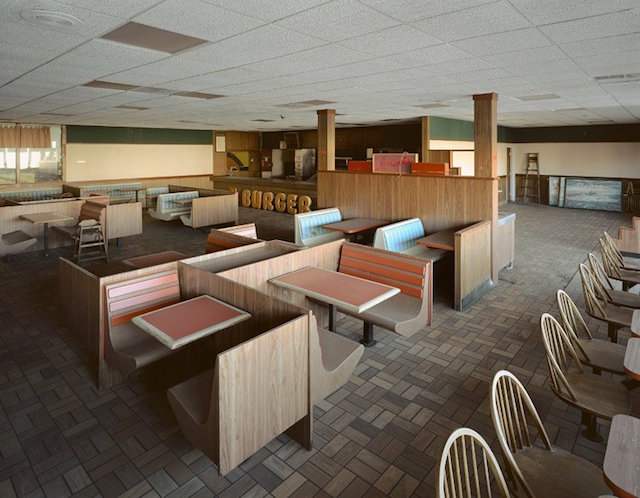 Burger King, which was built in 1983 and is no longer there, was Building 785 on Governors Island. (Photo by Andrew Moore)

A Brief History of Early Days

The recorded timeline of Governors Island starts in 1524, when the Lenape called it Pagganuck ("Nut Island"). One hundred years later, in 1624, eight Dutchmen landed there, adopting that name and calling it Noten Eylandt. The Dutch West India Company constructed a fort and sawmill there before relocating to the larger Manhattan Island the next year. Still, in June 1637, the company's director Wouter Van Twiller reportedly purchased the Island for his own private use from the Lenape for "two ax heads, a string of beads, and a handful of nails." The Dutch government then seized it, before the English came in 1664 (calling it Nutten Island). It switched hands and names a number of times, but in 1699 it got its forever name (at least, so far): Governors Island. 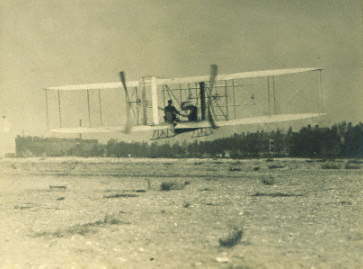 It might be small in size, but you need a whole book to tell the full story of Governors Island's history. There were revolutions, battles, and wars that went on for years, and by the time the dust settled, the island belonged to New York, though it was transferred to the U.S. government in 1800 for military use. By 1878, it was an army headquarters. Soon after, the island expanded—using rocks and dirt from the excavation of the Lexington Avenue Subway "and dredge from New York Harbor," they were able to create 103 new acres, more than doubling its size by 1912.

In 1909, the Island became the center of a major news event when Wilbur Wright came flying in. In reality, his plane was shipped to Fort Jay and assembled on the Island; he both took off and landed there, looping around the Statue of Liberty during his flight. And when he landed, he celebrated by strolling up to a wooden bar in the basement of the old South Battery Officers' Club (Building 298). That bar is still there today, sitting in total darkness, under a dusty and once-decadent ballroom. The stairs leading down to the bar are creaky, and to see anything you need to bring a flashlight. 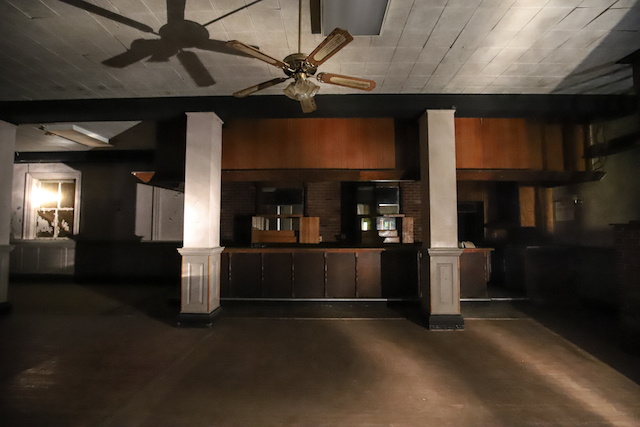 The bar in the South Battery Building. (Sai Mokhtari / Gothamist)

We were told that "the South Battery was originally erected during the War of 1812 to guard Buttermilk Channel (the waterway between Governors Island and Brooklyn) and was later used to house the Army Music School's fife and drum corps through the 1870s. Between the 1880s and the 1930s, it was slowly transformed into an Officer's Club, known for Corbin Hall, its grandiose ballroom." That room hosted the likes of Burt Bacharach, who played piano there from 1950 to 1952 while serving in the Army as a bandleader. In Burt's own words:

"Somebody had the idea that I was a concert pianist, and they took me out of basic training and put me on the road playing army bases. I just didn't have the repertoire, and I had to really fake it. I pretended like there was one unpublished Debussy work that I kind of improvised. I was sure somebody was going to find me out and bust me. I felt so fraudulent in what I was doing. But I did get to play at Governor's Island, doing concerts. The officers' club head in Asia who was called back in the service heard me and he just figured, as long as he was back in the army and he had to give up the kind of life he liked, he would have a piano player in his club at night. So he got me requisitioned and I was playing in a tuxedo every night at the officers' club."

Along with the bar in the basement, the Officers' Club had a bowling alley (which is no longer there).

That building overlooks the Parade Grounds, which was once home to Manhattan’s only golf course, a 9-hole course built in the 1930s, which remained open until 1996 (it has since been flattened). 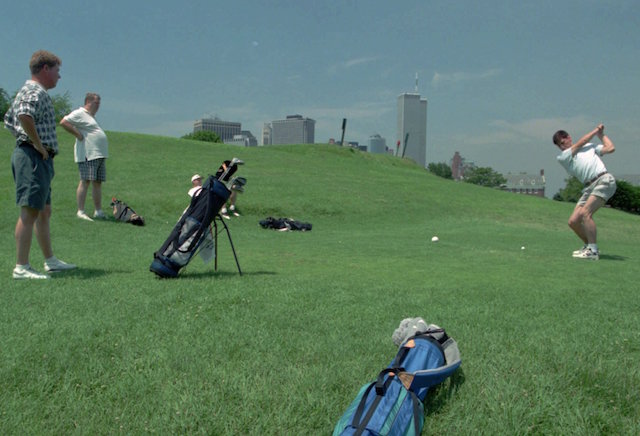 From 1918 to 1931, the Island was home to "the world's shortest railroad," featuring just 1.75 miles of track. It was used to carry "coal, machinery and supplies from piers to shops and warehouses," according to author Ann L. Buttenwieser, who wrote "Governors Island: The Jewel of New York Harbor," an incredibly detailed history of the area.

Today, you can see a remnant of the railroad right behind Island Oyster. Building 110 (now the Lower Manhattan Cultural Council Arts Center) was the original entrance to the railroad; on the building's exterior you can see the curved entrance, and tracks can still be seen on the ground floor. 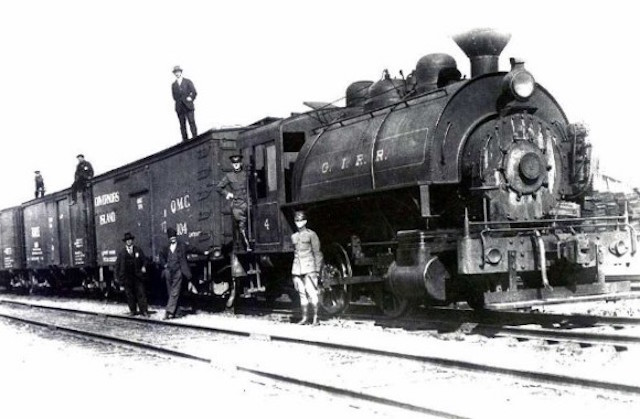 In 1965, Mayor Robert F. Wagner suggested making the Island a national recreation area as military operations continued to dwindle, although there were still around 5,400 people living there. The Castle Williams prison was shut down in 1966 to make way for classrooms and day care, and some of the Coast Guard base closed. But it wasn't until 1997 that Coast Guard operations fully shut down there, and six years later, in 2003, a portion of the Island was transferred to New York City and New York State for the price of $1. The Department of Interior holds jurisdiction of the national monuments (including Fort Jay and Castle Williams). In 2007, plans for a 40-acre park on the south side of the Island were set in motion.

Click through for a look at the buildings that still stand today, and below, learn more about them (with a little intel from the Trust of Governors Island). 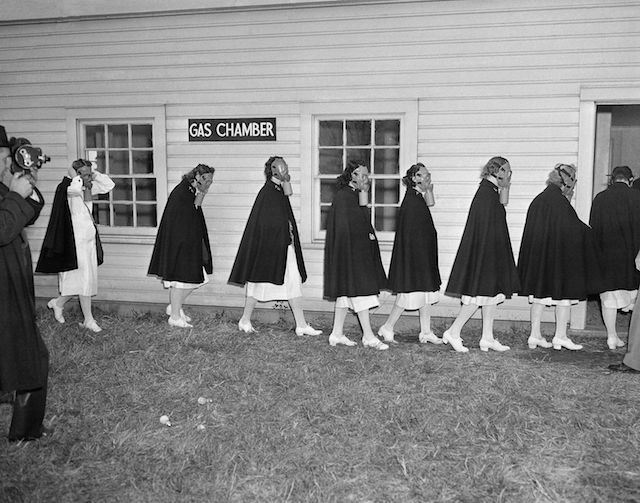 The Fort Jay Theater
Built in 1939 and constructed under supervision of Army Motion Picture Services, the theater served as a gathering place for Island residents for performances and first run movies. It’s rumored that composer Irving Berlin’s “This is Army” was inspired by a show he saw in 1942 at the theater. Families could enjoy double features for $2. “Lost in Time 2” was the last film shown at the theater before it closed. The theater has 700 seats, which are still in there today.

World’s Shortest Railroad
In 1918, the U.S. Army built a set of train tracks that was only one and a half miles long. Stretching from the pier to the warehouse, the line consisted of three cars used for carrying machinery and supplies. The railroad was even equipped with a regular crew, including a dispatcher and a track foreman. Trains arrived from Manhattan by barge. Building 110 (now Lower Manhattan Cultural Council Arts Center), constructed between 1870-1879 and initially used for arms storage, was the original entrance to the railroad. Tracks can still be seen on the ground floor. 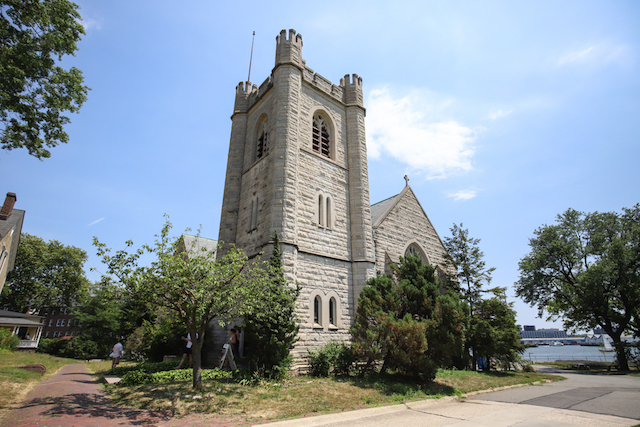 Chapel of St. Cornelius
The Chapel of St. Cornelius the Centurion was built on Governors Island in 1846 through the efforts of the army chaplain, the Rev. John McVickar, and support from Trinity Church. By 1866, the War Department stopped providing chaplains to Governor’s Island, and Trinity Church offered to maintain a chaplain at her own cost if the army would agree to place the chapel under the parish’s control. St. Cornelius became a part of Trinity Parish as a free chapel in 1868. The Parish replaced the small wooden church with a new chapel designed by Charles C. Haight in 1906.

The Hospital
Comedians Tom and Dick Smothers were also born in the Post Hospital on Governors Island in 1937 and 1939 respectively. Their father, Major Thomas B. Smothers, was stationed on the Island during that time. Neal Adams, the Batman and Superman comic book artist, was born there in 1941 as well.

Colonels Row House 403
The last official meeting between President Ronald Reagan and USSR General Secretary Mikhail Gorbachev took place on Governors Island on December 7th, 1988. Earlier that morning, Gorbachev announced the U.S.S.R.’s withdrawal from much of Eastern Europe and the downsizing of the Soviet military at a speech at the United Nations. This final, somewhat nostalgic meeting with Reagan was also the first formal meeting with President-elect George H.W. Bush. Within the year, the Berlin Wall would fall, and the Soviet Union would dissolve by 1991. 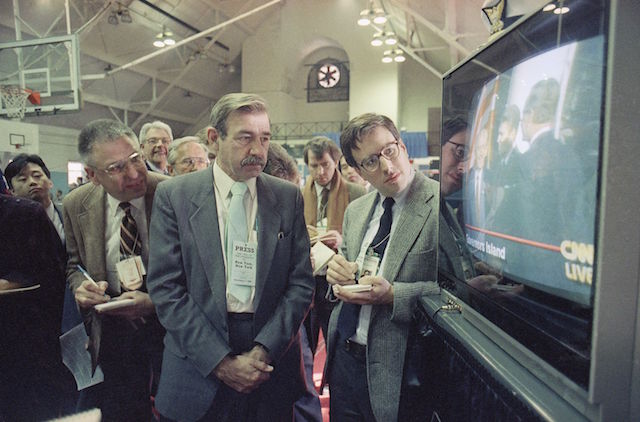 Reporters gather around a television set in Liggett Hall. (Shutterstock)

Liggett Hall Gymnasium
The giant army barracks (known as Liggett Hall or Building 400) were constructed across the center of Governors Island to prevent a public airport from being built there. It was once home to a Regiment of 1,375 soldiers, and when built in the 1920’s, was the longest building in the world and the largest constructed by the United States Army prior to the Pentagon. The hall is named for Lieutenant General Hunter Liggett (1857-1935) who commanded in the Spanish-American War and World War I. The construction of Liggett Hall, as part of the McKim, Mead and White Master Plan for Governors Island prevented LaGuardia airport from being located on Governors Island.

During the aforementioned meeting between Gorbachev, Reagan and Bush in 1988, reporters used Liggett Hall as a press center; due to tight coverage restrictions, most could not attend the actual events and had to cover them from the gymnasium, which is pictured above. 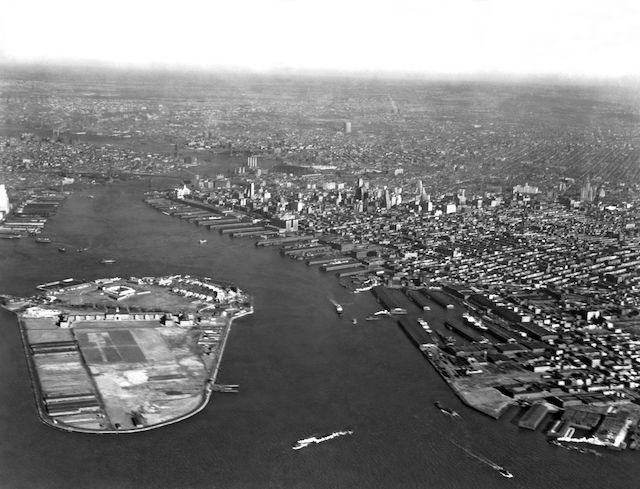 Governors Island in New York Harbor. Brooklyn is a quarter mile away on the right and Battery Park in Manhattan is a half mile to the left. 1922. (Shutterstock)

As for the future, we'll have more on that soon. Currently, the Trust is envisioning "utilizing the small historic houses in Nolan Park and Colonels Row for cultural, arts, and educational use," while the larger buildings (like Liggett Hall) could one day house "a mix of educational facilities, conference/convening facilities and potentially hospitality/hotel." Uses for these buildings need to comply with their deed, and complement the park, helping them to expand to year-round destination.

Recently, they announced they are rezoning the South Island development parcels, with a focus on activating the historic buildings and creating a "framework for future development on the South Island," which currently has outdated zoning (it's zoned for housing, which isn't part of the future Governors Island plan).

Governors Island will close at the end of day on October 31st, and reopen next May.

#abandoned ny
#flashback
#governors island
#history
#original
Do you know the scoop? Comment below or Send us a Tip