The glorious old Pennsylvania Station is long gone, but there is a piece of it left on 31st Street, hidden in plain sight. The much smaller granite building that remains isn't as grand as the original station was, but it's still a lot nicer than our present-day incarnation, which cowers below Madison Square Garden in the old station's footprint.

Recently, Scouting NY passed by 242 West 31st Street and was curious about the building, which is caked in city grime and has bars over its blacked out windows—"Some are cracked, and one in particular has a DANGER - HIGH VOLTAGE sign affixed to it." The building is the Penn Station Service Building, which was designed by Charles McKim and William Symmes Richardson (McKim, Mead & White), the site notes, and built in 1908. Since it was still in use and not physically attached to Pennsylvania Station, it was not torn down with it in 1963.

We believe the building is currently owned by Amtrak, and may be a central component of their Gateway plan for new Hudson River tunnels (we have reached out to Amtrak to confirm, and will update when we hear back). The image below is from a 2011 rendering (PDF) showing the block that building is in (in red):

In 1989, the NY Times took a look at the building, calling it a "little-noted element of the old station... a monumental building in its own right." 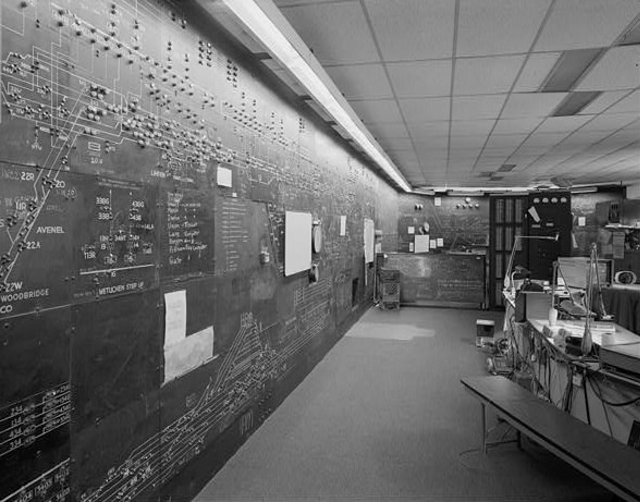 "The station was completed in 1910, a giant pink granite Roman-style structure surrounded by old brownstones and tenaments. But construction photographs of the station site in 1908—when it was just a giant hole in the ground - also show a gleaming new building on the south side of 31st Street—the station's service plant.

The service plant held the key to the railroad's new operation, for it provided the electric power for the engines in and out of New York. Research by the industrial archaeologist Thomas Flagg indicates that it was also used to supply heat, light, elevator hydraulics and refrigeration for the station as well as compressed air for braking and signaling. It even incinerated the station's garbage.

The mid-block building, 160 feet long and 86 feet high, is divided by a north-south fire wall with boilers for power generation on the west side and power distribution, offices and other elements on the east." 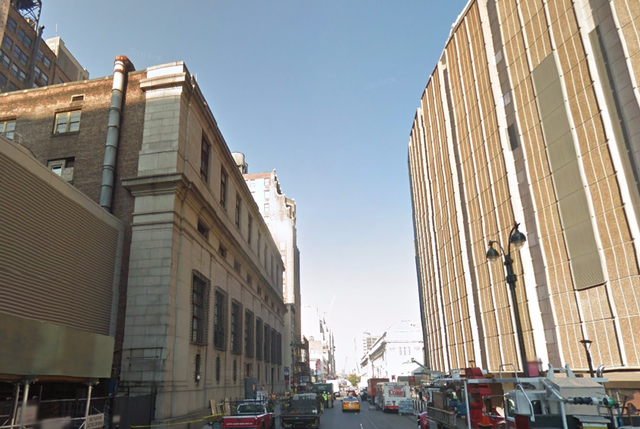 The building sits across from MSG. (Google)

The service building was created using the "simplest elements from the station in the Stony Creek pink granite. The Roman Doric exterior, a row of severe pilasters bracketing ventilation windows covered with iron grills, is about as plain as a building can get and still have an identifiable style."

The building is not currently protected by Landmark status, and in 2008 the Municipal Art Society urged the LPC to take action and guarantee the building's long-term survival. And the Library of Congress has noted that "he building has been determined National Register eligible by the New York State Historic Preservation Office."

#architecture
#flashback
#history
#penn station
#pennsylvania station
Do you know the scoop? Comment below or Send us a Tip