There needs to be a mechanism to track the reactions of people entering Grand Prospect Hall for the first time. "Oh my God," would probably win by a landslide, followed by a few moments of total blankness as neurons fire erratically, struggling to process the incredible mental overload of so many ornate moldings.

It was reported last week that David Lynch's greatly anticipated Twin Peaks reboot was filming within the hall's baroque walls, a rumor propagated by "No Parking" signage that read "Imperial Woodpecker/Twin Peaks." Hall employees have been sworn to secrecy via nondisclosure agreements, but for chrissake, look at the place. 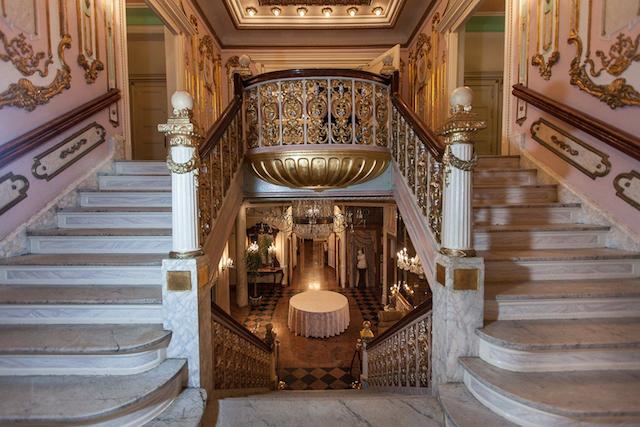 Twin Peaks or no peaks, Grand Prospect Hall is possessed of an almost excessive amount of whimsy, especially when your tour is guided by Michael Halkias, who owns the place with his wife, Alice. You know Michael and Alice—not only have they run GPH for 34 years, they starred in the '80s commercial of your childhood fever dreams. Because you're on such close terms, feel free to dispense with the formalities—to you, they're Mr. and Mrs. H.

I learned a great deal in the nearly three hours I spent in Mr. H's company—the exact church in Greenpoint from which he bought 14 of the hall's crystal chandeliers, for example, or how a 3-foot-tall Buddha found new life in the Oak Room after it was rescued from the 2013 liquidation of Ajna Bar. The place is awash in columns rescued from trash heaps and ceiling tiles scored from defunct restaurants and bars. The chandelier by the front entry was saved from the original Loew's Kings Theater.

Mr. H is bursting with information, and he wants to tell you the provenance of everything. "Young lady," he repeatedly scolded our photographer when she dared turn her back to take some photos. "You are not listening to me." 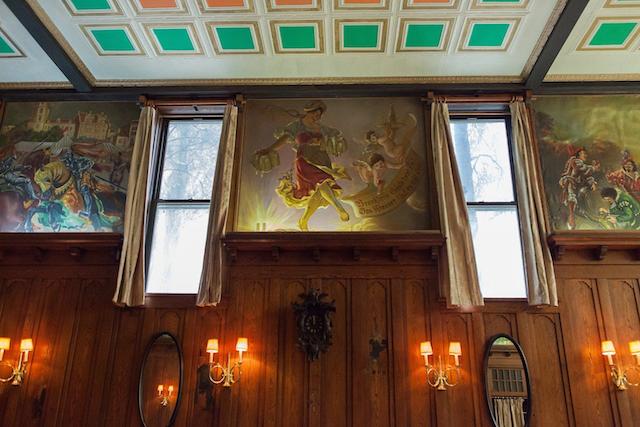 Grand Prospect Hall is primarily used for private events, but it should also be open for guided tours and massive games of Hide-and-Seek. It is positively steeped in history—a hand-operated French bird cage elevator was the first elevator to be installed in Brooklyn, and it's still functional, provided you're not afraid of sudden, jolting stops.

The trapdoor once hidden behind the bar in the Prohibition-era speakeasy may be gone, but the peep hole from which Al Capone peered is still in place. The basement is home to a bowling alley, though tragically we were barred from entering, since it's currently being used for storage and thus not up to Mr. H's rigorous standards for order and cleanliness.

While very forthcoming with the origins of paintings and carpets and tables and cornices, Mr. H only shares what he wants to share. He declined to tell me how much he paid for those 14 chandeliers, or the origin of a pair of intriguing chairs that looked like they were made from twisted tree branches. He said offers from developers roll in every day, proposals to slice his beloved hall into a hodgepodge of soulless condos. "I get letters, I get phone calls," he said, but would not share whether he was considering any of them seriously. (Based on his devotion to the hall's furnishings, it seems unlikely he'll capitulate anytime soon.) 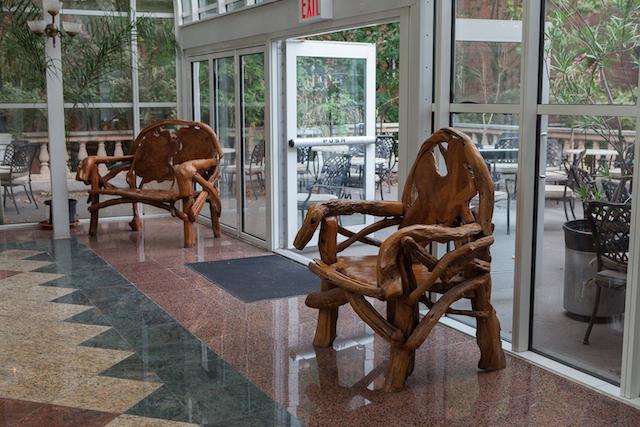 But back to Twin Peaks: Hall staff may have signed a NDA, but still, there were clues. The building contains 16 rooms, and each seemed to have been mussed in some way by the 300-man production crew traipsing over the ornamental carpets in the two days prior. Mr. H also guided us through the expansive kitchen—"They filmed in here," he said mysteriously. A discarded box of Coco Libre coconut water rested on a chair. Does Mr. Lynch have a fondness for coconut water? Is it a reference to Coco, a character from Mulholland Drive? Rumor had it that the production was not, in fact, Twin Peaks, but an Apple commercial—had Mr. H heard anything about that?

"I'm too stupid to know," he said, smiling wryly, before returning to his explanation of each of the room's friezes.

#dreams
#grand prospect hall
#twin peaks
#the man from another place
#brooklyn
#weddings
#original
Do you know the scoop? Comment below or Send us a Tip