A Night at the Museum: Report from Guggenheim Hotel 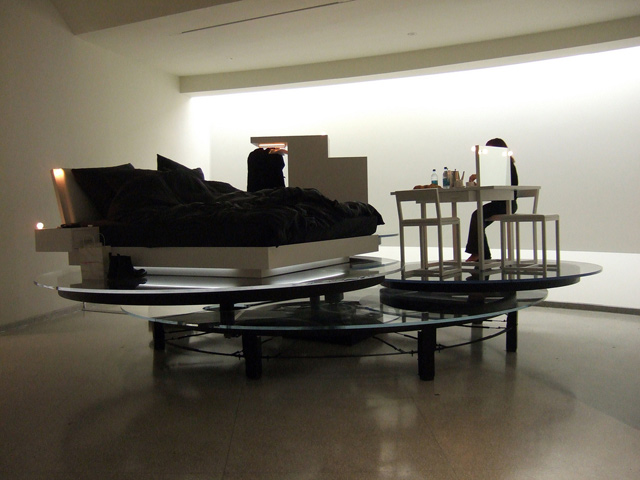 Photo courtesy Alaina B.
You'll recall that the new exhibit at the Guggenheim features Carsten Höller's Revolving Hotel Room, which the museum has been renting out to guests who pay $549 and up to sleep in an installation comprised of three glass discs mounted onto a fourth disc "that all turn harmoniously at a very slow speed." Guests are also free to spend the night wandering all six floors of the Frank Lloyd Wright rotunda.

As a surprise anniversary gift to her husband, Alaina Browne (Serious Eats General Manager) booked a night at the museum. In response to our questions, she described it as "a once-in-a-lifetime experience" and said it was "definitely worth the price tag." Browne and her husband, Six Apart VP Anil Dash, hadn't seen photos of the exhibit beforehand, and were surprised to find that the room was not enclosed; "it's actually just out there in the rotunda." There's a shower on the 7th floor in the museum director's office.

A security guard was stationed one level beneath the hotel room all night, and when the couple wanted to go to the restroom or just wander the rotunda, he was required to act as their escort. Browne said it was hard falling asleep because some the installations are "pretty noisy" and stay on during the night, but a guard turned one of them off at their request. Security also turned the museum lights off at their bidding, which must have felt empowering.

Asked whether the mood was right for romance, Browne replied, "It's an undeniably romantic setting, that's all I'll say about that." It doesn't take X-ray vision to read between those lines: First motorcycles, then Armani, now people are just straight up doing it in the Guggenheim! After the jump, some video from the couple's revolving bed (SFW), and the BBC has a segment from the couple's stay.

#carsten höller
#guggenheim
#museum
#photo
#review
#Revolving Hotel Room
#sleep
#theanyspacewhatever
#video
Do you know the scoop? Comment below or Send us a Tip
A new Gothamist is coming! We’ve moved comments over to our beta site. Click here to join the conversation and get a preview of our new website.