It has now been almost four full months since anyone has reported seeing the Mandarin Duck (a.k.a. Mandarin Patinkin) in New York City... or anywhere else, for that matter. And so, it is my duty (and honor) to remind you that Mandarin Patinkin still exists—I don't mean this in a poetic sense, like he exists in our hearts (which he does) or our memories (yes, he is there, too), I mean he literally still exists, and will likely to return to Central Park after molting season.

In the meantime, here's what we know a list of the lies we tell ourselves:

In reality, the Mandarin Duck is probably just molting in privacy, and we sort of expected him to leave the big city during this time because he's more vulnerable while molting, since he can't fly. (He also must know that summer in NYC sucks.)

David Barrett, who runs the Manhattan Bird Alert account, assures me that "birds have amazing geographic memory," which will help Mandarin Patinkin return to his adopted home of New York City... when he's ready. 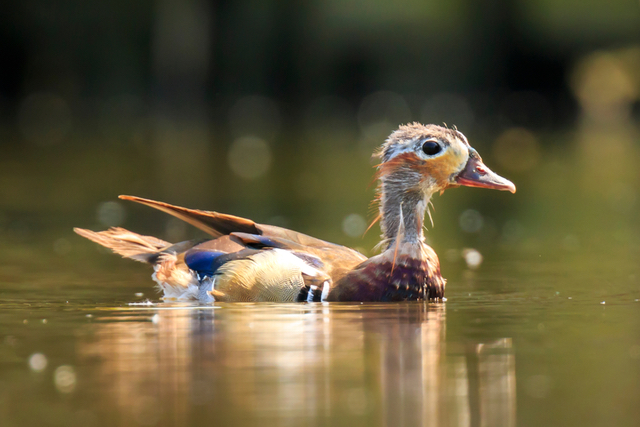 Barrett told me this morning we can expect to see him back at his pond around mid-September (should the Cult like to plan a spectacular ritual for his return, keep that date in mind). And when he returns, "he will have his shiny new wing feathers" (and hoo boy, some stories to tell). Remember, it was around early October last year when we first reported on this duck's arrival in NYC, so this timeline checks out.

As for his current location, according to Barrett, he must have flown far away in March (and this would not have been the first time he's left). "He is the world's most famous duck," Barrett says, "If he had gone anywhere near people, particularly in or near NYC, he would have been found." Currently, however, he looks different than when we last saw him, so wherever he is, the internationally known Mandarin Patinkin is in disguise, which is also why there haven't been any reported sightings.

Barrett says, "My guess is that he went on a sequence of flights that took him well out of the area... Probably 60 miles or more, to the wilderness in New York, Connecticut, or Massachusetts." He noted that ducks seek out secluded bodies of water before they start molting, so they have a safe space where they can be inconspicuous: "He should now be in molt on a small lake or pond, staying isolated and out of public view."

Barrett also revealed that "[the Mandarin duck] had been associating with a male Wood Duck who left at the same time." So if you see a molting Mandarin Duck and his buddy Wood Duck out there getting into some low-key hijinks in the 'burbs, please send us an email.