A Look Inside The Iconic East Village GEM Spa

GEM Spa is the only place in New York City where you can buy a pack of smokes, a fedora, an egg cream, and have your fortune told by Zoltar. It sits at the corner of 2nd Avenue and St. Mark's Place, where it's been for quite some time, though the store's opening date depends on who you ask. The Wikipedia entry alone makes for one of the messiest histories we've ever seen, but current owner Ray Patel tells us it has been there for 75 years, and 30 of those years the place has been under his lock and key. He plans to keep it that way—"GEM Spa is not closing!," he declared.

The store itself has remained the same in an increasingly changing landscape, with other institutions in the area shuttering due to rent hikes. Most recently there's been news of nearby Trash & Vaudeville closing up their St. Mark's shop, though we have since been told by someone connected to the store that is not true... for now.

Basquiat's "Gem Spa," and Ted Berrigan in 1971 (both Berrigan and Allen Ginsberg mentioned GEM in poems)

Patel tells us that GEM stays in business despite doing no advertising at all, and outside of their regulars, they run off foot traffic and word of mouth—"We have survived for all these years because of loyal customers. Our main goal is to make customers happy." The shop once counted Patti Smith, the New York Dolls (who shot an album cover there), and other local legends as regular customers. On top of its more famous regulars, its location has given it ties to the music history of the neighborhood—at one time it had the Fillmore East and the Electric Circus on either side of it.

Their iconic signage probably doesn't hurt at drawing customers in, either—that strip has been so photographed in the past decades that it just kind of became an East Village landmark. And indeed, there was a non-stop flow of customers into the store during the time we spent there recently.

When Patel took over 30 years ago, he only did some basic renovations, which has helped in keeping a consistent feel of the store, which he runs with his wife. Patel told us one of the only differences is in the 1970s and '80s there were a lot of "peddlers" outside. Currently this is the area where you can purchase t-shirts, hats, bandanas... this wasn't always there, Patel took out a wall and replaced it with glass, then included these outdoor goods that you now see on the sidewalk. 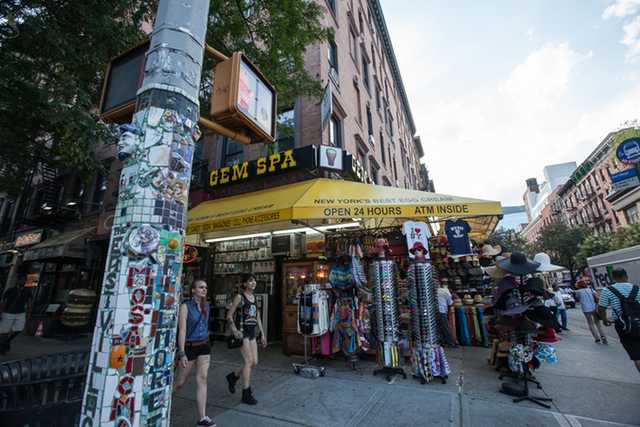 The Mosaic Man's work outside of GEM. (Photo by Gretchen Robinette/Gothamist)

The name of the shop goes back to the beginning of its existence, which seems to be one thing every one can agree on. According to a 1969 NY Mag article, in the 1920s the storefront belonged to the Goldfeder family—"the name 'GEM' comes from a combination of the initial letters of Gladys, Etta, and Miriam." (Patel also told us this story.) When the magazine visited the shop, it was Ruby Silverstein behind the counter, who had taken over the lease in 1957, before Patel came on in the 1980s. The heart and soul of this operation for most of its existence has been the egg cream—the egg cream station has stayed exactly the same, Patel told us, and the egg cream is world famous.

A customer named Mark entered the store while we were there, he has lived in the neighborhood for 35 years, and noted that directly across from GEM has been a storefront that's been a frozen yogurt spot, a GAP, and a movie theater—"the movie theatre used to play Taxi Driver at midnight, and if you had a mohawk, they let you in the movie for free."