I have always wondered what in the heck goes on inside Masonic lodges: The secrets of Freemasonry are not for women to know—not for anyone but Freemasons to know, really—which makes me inherently suspicious of the entire operation. What do men get up to in there, and why can't they breathe a word of it to anyone outside the brotherhood? What is so incriminating, or so stigmatizing, or so singularly valuable that it warrants such a heavy cloak of silence?

Last week, Joseph Patzner, a librarian at the Chancellor Joseph R. Livingston Masonic Library, situated on the 14th floor of the Masonic Hall in Manhattan's Flatiron District, agreed to sit down with me and discuss the mystery, along with a bit of the Hall's history. This peek behind the curtain did not illuminate the full extent of the Masons' cloistered activity, but it did provide a festive backdrop against which my imagination now runs wild. 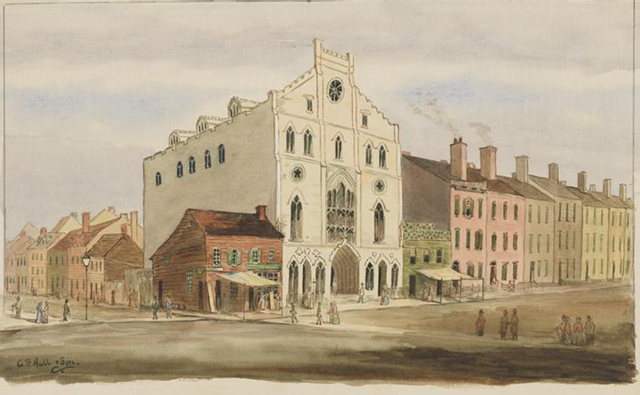 Between 1826 and 1856, New York's Masonic Hall stood on Broadway, between Duane Street and Pearl Street. For upwards of a century, however, some version of the 6th Avenue spot has served as the Headquarters for the Grand Lodge of Free and Accepted Masons of the State of New York for upwards of a century: Construction on the first building to occupy the plot at 6th Avenue and 23rd Street completed in 1875.

Ballooning interest in the order, however, meant that the freemasons soon required a bigger space: In 1870, when they laid the cornerstone for the original temple, membership stood at 75,262; by 1905, that number had grown to 126,177, Patzner said. A new building went up between 1907 and 1909 on 24th Street, and in 1911, demolition began on the 23rd Street site. The original temple was replaced with today's Masonic Hall in 1912, and merged with the 24th Street building in 1913: Now, the hulking structure now sprawls across a full block.

While Patzner couldn't explain the catalyzing spike in membership, he did note that Freemasonry appealed to many because it afforded members "a space for networking between different trades," as well as "a space to better yourself," a pursuit that sits at the heart of the extremely hazy definition of what Freemasonry involves. 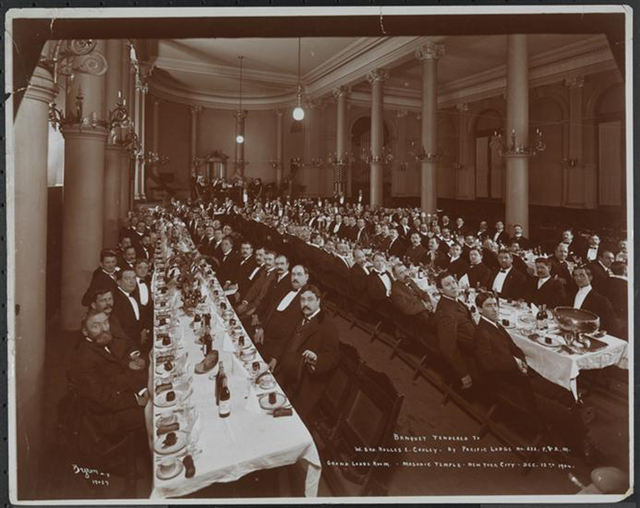 Freemasonry, as the Economist explains, traces its roots back to medieval stonemasons' guilds, which conjured up an ancient lore around the trade and established the emphasis on study, especially of mathematics and geometry, that apparently persists today. These guilds ultimately expanded to include men who did not build things from stone and brick, and who paid fees for the privilege of joining in the order's educational pursuits. Freemasonry remains the definition of a boys' club, barring women from membership to this day, although I was surprised to see a number of non-men milling about the building during my visit.

According to Patzner, who is not a mason and therefore does not get to know all the secrets, self-improvement remains the central theme, one best encapsulated by the Masonic symbolism of an ashlar: a large stone that starts out rough and uneven, but through the concerted efforts of a Mason, takes on the clean lines of a finished brick. "As you go through with your coursework," Patzner explains, "you're improving yourself. You smooth out the stone that was once rough."

Freemasonry encompasses a diffuse network of lodges operating on that same principle, even as they adhere to distinct, individual ideologies. A fraternal order devoted to personal betterment and the betterment of society writ large, Patzner explains, Freemasonry pulls symbols and practices from cultures around the globe, with a special emphasis on antiquity.

Those influences are evident in the architecture and the decor of New York's Masonic Hall: Every meeting room houses columns, which recall the Temple of Solomon (a prominent feature in Masonic symbolism for reasons not immediately clear to Patzner), topped with globes intended to invoke the "universality," as Patzner puts it, of humankind. Every room has an organ, decorated in keeping with its aesthetic theme, used during rituals whenever they call for hymn singing. All rooms are arranged in an east-to-west layout, and each houses three tall candles arranged as a rectangle with the fourth corner missing: The Master of the lodge stands at the eastern candle, because the east—representative of knowledge—"is seen as like the most sacred space in the lodge," Patzner says. "It's where the light rises, kind of comes in."

Freemasonry ascribes great significance to the sun, to light, and yet next to no natural light penetrates their ceremonial and meeting rooms: Symbols incorporated in Tiffany-style glass panels stand out thanks to artificial backlighting. Patzner cannot say exactly why these spaces lack windows, although if I had to make an educated guess, I would attribute this design choice to the brotherhood's compulsive privacy, and their reported desire to keep the outside world from seeing what goes on inside the lodge.

Symbols embedded in the architecture provide a few clues: The Renaissance Room on the Hall's 6th Floor, for example, calls out the four cardinal virtues of Freemasonry (temperance, prudence, fortitude, and justice), as well as the seven muses. Many rooms boast a window with a big G emblazoned across the glass, which Patzner tells me stands for sacred geometry, or god—not Christianity's God, or the divine figure worshipped in any one religion, but any kind of deity. Belief in a higher power of some kind is a prerequisite for masonry membership. In Masonic symbolism, you often encounter the trowel (which represents brotherly love) and the triangle (which stands for "the universal nature of those who are coming together," Patzner says), which seem like they were once pulled from the mason trade itself, although an outsider can only speculate. 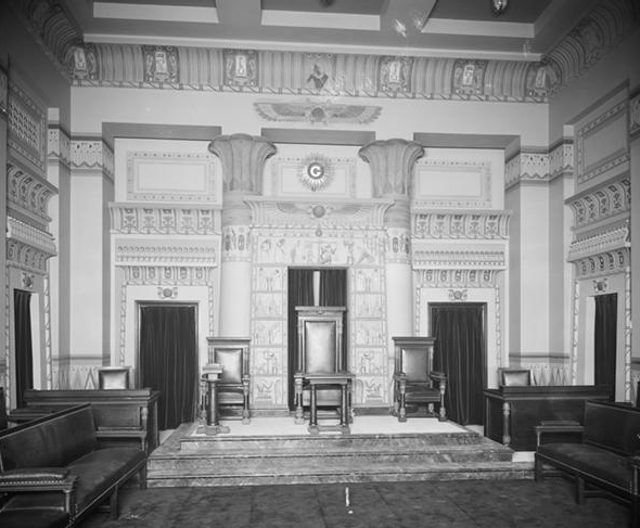 So what were all these guys doing inside their lodges? Patzner has no intel on the exact nature of Masonic rituals, and emphasizes that these gatherings are convened on a basis of member need: The need to advance to a higher degree of understanding, and the lesson currently being pursued. We know these rituals involve organ music, hymns, and chanting. We know they involve candles and a very specific positioning of high officers. We know they involve something called a tracing board, which displays the symbols central to the lesson and, based on the one I saw hanging in the library, look like a surrealist jumble of icons incoherent to me but legible to a Mason. And according to Patzner, these lessons may occasionally involve alchemy, at least once a Mason ascends the order's highest degrees.

Were our founding fathers, our presidents, our city planners, our entertainers, witches conjuring their dominion over their particular field? Are they still? I couldn't say, and Patzner would probably wave me away from that idea in the calmest possible terms, but there is something eerie in a gender-exclusive meeting of male minds that just happens to have spit out some of history's most powerful men.

If you are curious, or if you would simply like to gaze upon all these ostentatious ornaments—these pillar-like candles and stately seats—with your own eyeballs, the Masonic Hall has offered tours since the early aughts. This seems to have something to do with declining membership (39,000 in 2017, versus a high of over 350,000 in the 1930s) and the necessity to attract younger generations, but again, only the Masons know that for sure. And they're never going to tell.

#freemasons
#masonic hall
#masonic lodge
#masons
#mystery
#original
Do you know the scoop? Comment below or Send us a Tip