There have been few gallery openings more frustrating and over-hyped than that of 190 Bowery's First Show/Last Show. The promised one day public opening of the landmark building turned into a nightmare when organizers suddenly announced that the gallery showing was by appointment only. I was lucky enough to snag an invitation for Wednesday at noon.

The twenty person audience who accompanied me were mostly divided into two camps: those who were there for the art and those who wanted to see the inside of the historic building. Surprisingly, none of the people I spoke with had even tried to brave the crowds on Saturday.

190 Bowery was originally built in 1898 to house Germania Bank. The century old building is known for its neo-Renaissance detailing like the arched windows and ornate outer facade, which in recent decades has been covered in graffiti and street art. Photographer Jay Maisel bought the building in the mid 1960s and has kept the interior under wraps ever since. He recently sold it to real estate developer Aby Rosen, who has since leased it out as office space. It was Rosen, along with Vito Schnabel, who hosted the show.

While inside, I spoke with fellow patron Kiki Falconer who said, "I really like the state of the building as a gallery, The tiles are broken, the wood is bare and it's elegant, ancient. So it's a really nice juxtaposition to the modern art." But the gallery offered limited access to the mansion. Only four rooms were on display—three cavernous and bright rooms on ground level, and a short, windowless, half floor room that was jarringly oppressive in comparison. 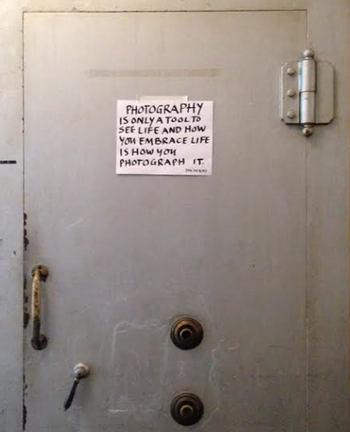 The most intriguing feature was two massive locked doors originally installed as vaults back from the bank days. Taped to the front of one of the vault doors was a sheet of paper with a quote from Don McKay written out in marker, "Photography is only a tool to see life and how you embrace life is how you photograph." A gallery employee told me the note had been left by Jay Maisel, who used the vaults as his dark room.

Attendee Mattia Minasi said, "I appreciate the art inside or whatever but the thing is I really would like to see how the building is, and I was a little bit upset that the exhibition is just one floor, one floor and a half." He also confessed to trying to open the vaults to "see something different." Sadly, the doors stayed closed.

I asked what should be done with the space. Minasi hoped the bottom floor would remain a gallery. Falconer saw different potential. "I was just imagining how amazing parties would have been in here," she replied.