Did you know that the Statue of Liberty didn't arrive here all in one piece, but in a series of parts and an instruction manual on assembling them? The sight was similar to one that would hit the big screen 83 years later, when George Taylor comes across her beached torch in Planet of the Apes. Except in the case of the Statue's arrival in the New York Harbor in June of 1885, she was in 350 different pieces, spread across 214 packing crates. 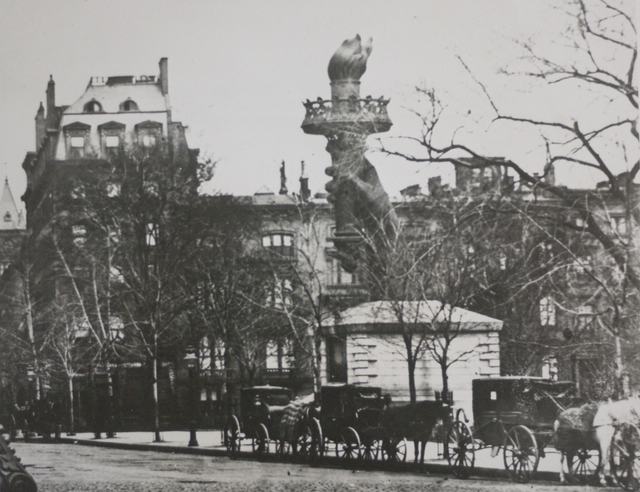 In 1876, her arm and torch were displayed in Madison Square Park for six years to raise funds for construction. This was, after all, basically one of our first Kickstarter projects. When the American Committee for the Statue of Liberty ran out of funds, Americans were urged through newspaper ads to donate money.

"We must raise the money! The World is the people's paper, and now it appeals to the people to come forward and raise the money. The $250,000 that the making of the Statue cost was paid in by the masses of the French people—by the working men, the tradesmen, the shop girls, the artisans- by all, irrespective of class or condition. Let us respond in like manner. Let us not wait for the millionaires to give us this money. It is not a gift from the millionaires of France to the millionaires of America, but a gift of the whole people of France to the whole people of America."

It all worked out, and once assembly began, it took four months to get Lady Liberty standing on her new pedestal. In October 1886 she was presented in an official dedication.

The Statue of Liberty has now stood tall for nearly 130 years—though she's undergone some makeovers in that time (see below), there are no images that are quite as apocalyptic as those ones when she first arrived.

Between 1984 and 1986, the Statue of Liberty underwent a massive makeover—her first big restoration. (Library of Congress)

Click through for a look, as she prepares to be enshrouded in firework dust this weekend.

#flashback
#history
#lady liberty
#statue of liberty
#original
Do you know the scoop? Comment below or Send us a Tip