"Helen Gurley Brown being presented gold record by staffer as others look on at champagne party celebrating her magazine's millionth copy edition at their office." October 1965. (via LIFE) 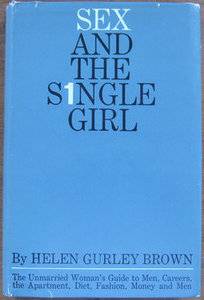 Yesterday Helen Gurley Brown died at the age of 90 in Manhattan. At the time of her death she was still the international editor for all 59 international editions of Cosmopolitan, a magazine she was Editor In Chief of from 1965 through 1997. In their obituary of the legendary editrix and author, the NY Times noted that she "was widely credited with being the first to introduce frank discussions of sex into magazines for women. The look of women’s magazines today—a sea of voluptuous models and titillating cover lines—is due in no small part to her influence." And her influence moved beyond metropolitan women of the 1960s—as Edith Zimmerman wrote in a recent piece about the magazine, "The first issue of Cosmo Azerbaijan, in 2011, included a feature on Brown: 'It was absolutely necessary for girls in our country to know who she is,' the magazine’s editor, Leyla Orujova, explained."

Brown's fun and fearless attitude had some later calling her "the original Carrie Bradshaw," but her impact went much deeper than the television character's, and her sexual pioneering has been applauded by many. Yesterday Dr. Ruth credited her for cracking the glass ceiling and opening up a frank discussion about sexuality. And even those who didn't see eye to eye with her, showed respect—Jane Pratt wrote today, "I very much respected her, even though she was the big sister whose philosophies I completely disagreed with"—she felt Jane magazine was the counterpart to Brown's Cosmo.

In a 1970 Esquire profile penned by the late Nora Ephron, she wrote, "Helen Gurley Brown relentlessly talks about her flat chest, her nose job, her split ends, her adolescent acne, her forty-minute regimen of isometrics and exercises to stay in shape. She does not bring up these faults to convince you she is unattractive but rather to show you what can be done, what any girl can do if she really tries."

Brown also influenced many on-screen women (not just Natalie Wood's character in the film adaptation of her 1962 novel, "Sex and the Single Girl"). In a panel in 2009, Mad Men creator Matthew Weiner talked about casting the women in the series, and how he was influenced by Helen Gurley Brown.

#cosmo
#cosmopolitan
#helen gurley brown
Do you know the scoop? Comment below or Send us a Tip