A Look Back At The Brief Glory Days Of Port Authority Bus Terminal, One Of NYC's Ugliest Buildings In 1950, the Port Authority Bus Terminal at 41st Street and 8th Avenue opened—today it's one of New York City's most loathed, dank, dark and dirty buildings, but at the time it was dubbed "revolutionary," "impressive," "functionally perfect," and "magnificent" by the NY Times.

Indeed, the idea was a beautiful one—get the buses all in to one place, instead of loading and unloading in the streets and at separate, smaller terminals around the city, like this one: 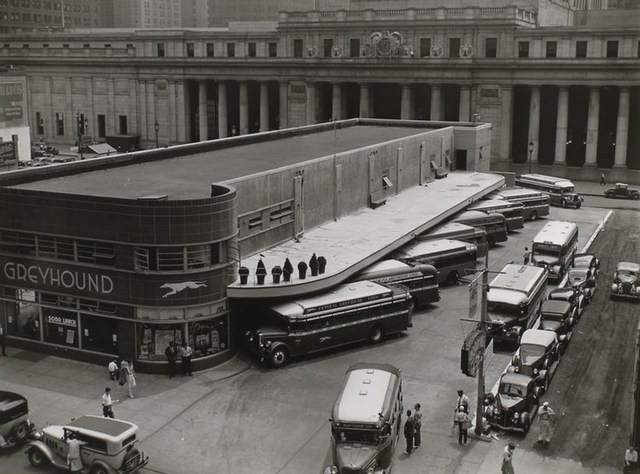 The building, however, was also deemed "pleasant." A laughable compliment now, but on December 14th that year, the day before it opened, the paper sang its praises: "The terminal is a magnificent job; its architectural lines are clean and striking; it is functional and businesslike, yet comfortable and pleasant; of all the abortive efforts in recent years to alleviate the midtown Manhattan traffic problem, here is one vast improvement that was delivered to the people and is certain to repay all the toil and grief that had to be endured to bring it about." 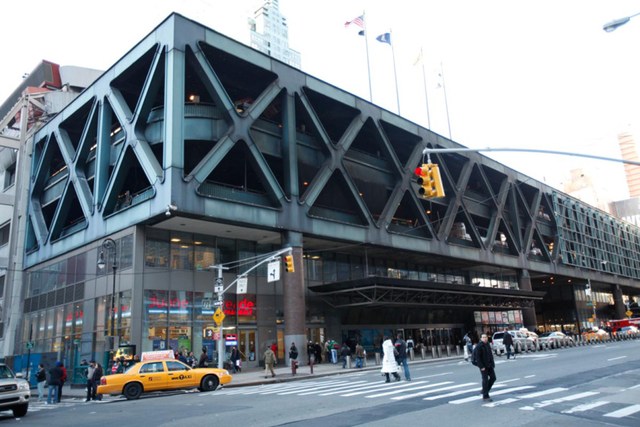 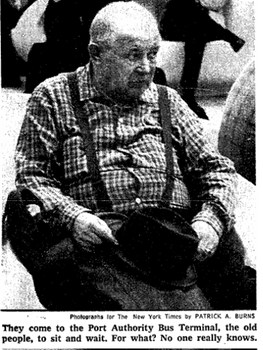 The Port Authority did have its glory days, but they are long gone—a poll of the Gothamist office on the state of Port Authority today yielded the below passionate responses:

And then there's John Oliver, who this summer called it the "Single Worst Place On Planet Earth."

These darker days were sort of set in stone steel back in the 1970s, when the building expanded to 42nd Street, and was fitted with 27 X-shaped steel trusses—in 2008, that feature got it to the #5 on a list of ugliest building in the world by Reuters. In the 1970s and '80s the area was "considered dangerous by police, tourists, and commuters due to high crime, prostitution, vagrant behavior, and inadequate upkeep and law enforcement in the building and nearby Times Square, especially after dark." In 1970, the NY Times declared that two types of people could be found inside, “Some are waiting for buses. Others are waiting for death.”

Click through for a look back at the transportation hub back in 1950, way before it fell into decay and was girded by those steel Xs. Maybe one day it will return to a "world class facility"? Earlier this year the Port Authority Board of Commissioners announced that $90 million would be spent on an improvement program for the bus station.

#1950s
#Bus Terminal
#flashback
#history
#port authority
#original
Do you know the scoop? Comment below or Send us a Tip