A Look Back At Clap Your Hands Say Yeah, As Two Key Members Leave Band

Robbie and Tyler stand in the back—this photo is so foreboding!

Sad news came this week when two members of Clap Your Hands Say Yeah announced they would be leaving the band. Tyler Sargent announced his departure today, following Robbie Guertin's Tuesday announcement that he would be leaving. They will both be playing their last show with the band this weekend at the CBGB Festival, and Guertin plans to focus on his band Radical Dads, "miscellaneous artistic endeavors, and also grow some vegetables. I am excited to see what else might come my way. Maybe some tomatoes?" Sargent, whose brother Lee will remain in the band, jokes: "I am currently in the process of forming a presidential exploratory committee for 2016." Since we're gluttons for nostalgia, let's take a look back at the band as we knew them.

In 2005 NPR posted this timeline tracking the band's "overnight success." At the time, the band was playing a slew of shows, at venues like Crash Mansion and Pianos (our own John Del Signore claims to have seen them at Southpaw during this short era as well). That year (just before this CYHSY graffiti popped up) we booked them at our Moveable Hype show, and David Bowie showed up to see their set—which followed Ghostland Observatory's amazing NYC debut (David Byrne followed suit by showing up at one of their shows later that summer). The next day Pitchfork gave their debut album a 9.0, and a Best New Music title. The rest is (highly documented) history, and would secure the band's fate as the first Blog Buzz Band. In August of 2005 one of the first viral videos*, showing a preppy dude dancing his ass off to "The Skin Of My Yellow Country Teeth," would come from their show at the Seaport—we unearthed it for you to enjoy now:

In the fall of 2006, the author of this post had a chance to go on the road with the band, who were touring with Architecture in Helsinki and Takka Takka. At their show in Seattle, P. Diddy sent over a bottle of booze, and Ben Gibbard took us all over to a bar across from the gum chewing wall. This was just a year after they self-released their first album. 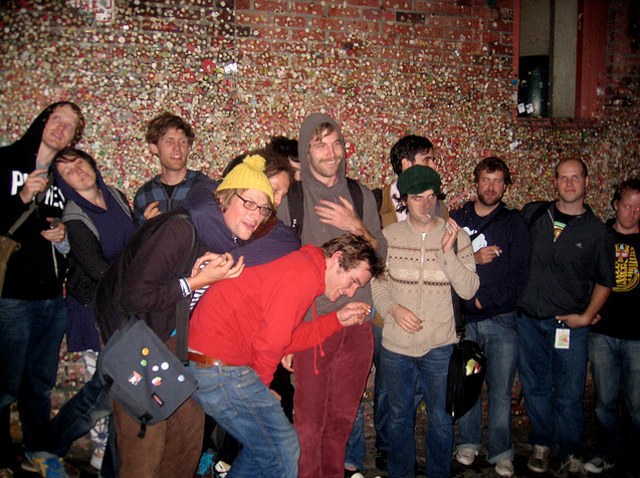 Here's a video from the stage at one of their last show's of that tour, in Los Angeles:

In December 2007, the band was still going strong, and sold out Hammerstein Ballroom on New Year's Eve with Bob Mould opening. In this short clip you'll even notice longtime fan David Byrne (at least, the top of his head), who was enjoying the show with his friend next to us.

Last year the band released their first album since 2007's Some Loud Thunder, titled Hysterical (check out all of our Gothamist House videos here):

As Sergent wrote in his farewell letter, "I wish Alec, Sean and Lee the best of luck with whatever CYHSY does in the future."

#clap your hands say yeah
#cyhsy
#nostalgia
Do you know the scoop? Comment below or Send us a Tip